Our 2019 home trip gave us the opportunity to hop through (and visit) 5 Asian cities within 2 weeks. Our itinerary consists of a mix of countries that I've already visited in the past but it was nice to revisit these places with hubby and MIL, and most importantly spend time with families!

When I was planning for our itinerary in Taiwan, I looked for somewhere further for a 'driveable' day trip (because our 'free' hotel in Taipei was for 7 nights). Kaohsiung was too far to drive and I considered Taichung and Sun Moon Lake, but there weren't much to see that sparked my interest. I stumbled upon an instagram post at Taroko Gorge and thought it was pretty so we decided to do a one-day road trip along the beautiful east coast of Taiwan to Taroko National Park. 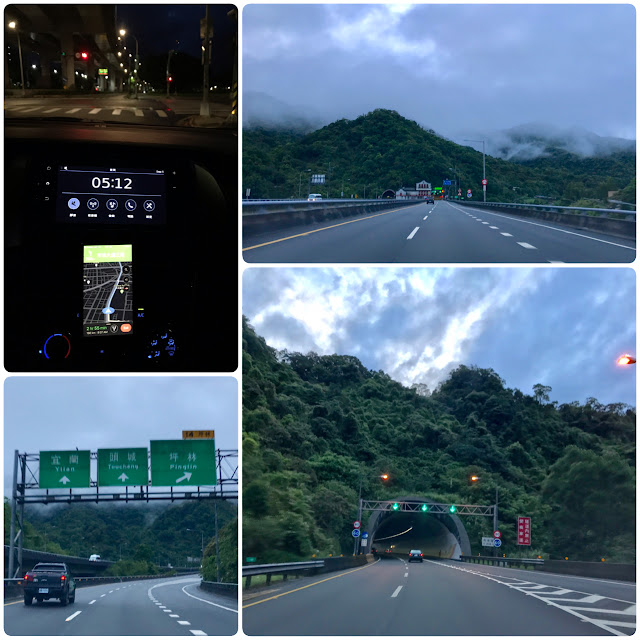 Thanks to jetlag, we were falling asleep and waking up too early for the first few days in Taiwan. So I decided to take advantage of this jetlag-ness and started driving at 5am in the morning. It was also easier to drive around Taipei city before the morning rush hour. 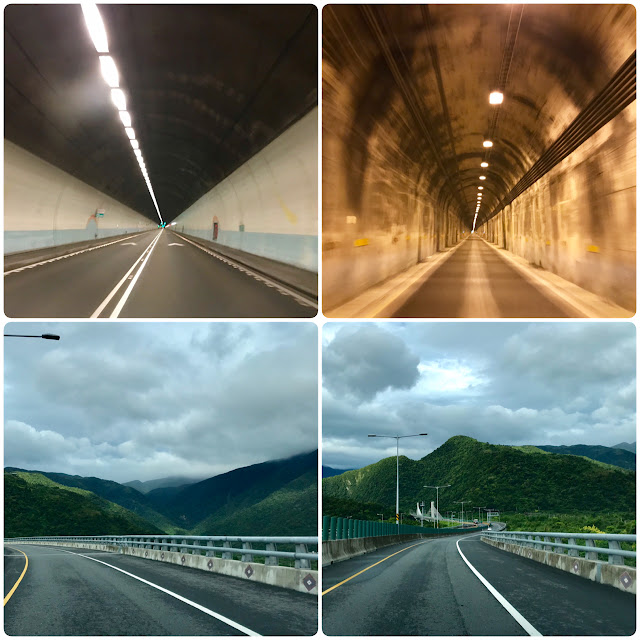 After a quick breakfast stop at 7-11, we left the city and started our drive along highway no. 5 through Yilan county towards Hualien county. The first half of the drive was pretty easy, mostly highway and drove through a number of tunnels 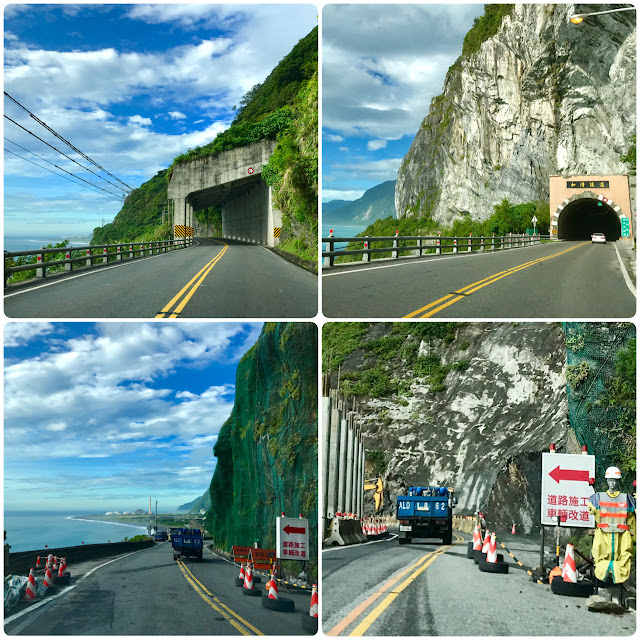 The second half of the drive took us along the scenic Suhua Highway 9, with winding and narrow cliffside roads overlooking the Pacific Ocean. There were a number of constructions that slowed down traffic but since we were early, it wasn't bad at all. I read that this is a dangerous drive but I didn't feel so. However, we noticed a lot of huge trucks driving this route so it's definitely good to go slower. 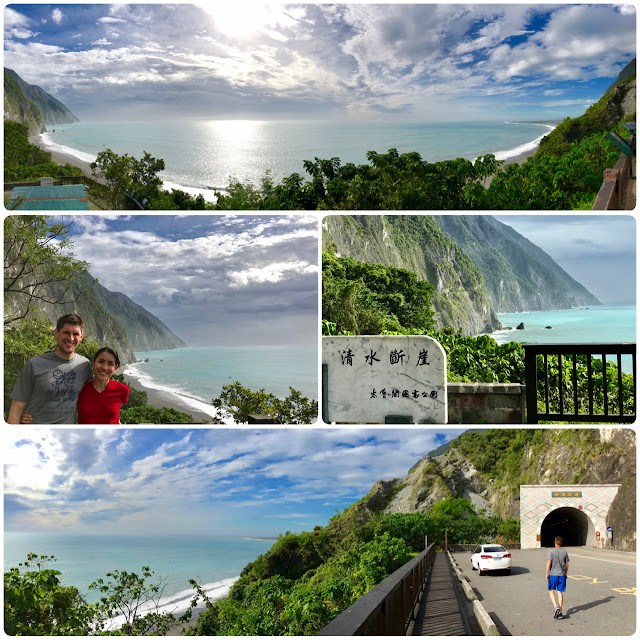 A quick photo and washroom stop at Qingshui Cliff viewpoint after driving for 3 hours. This was an easy stop as there was a small parking area right by the viewpoint. 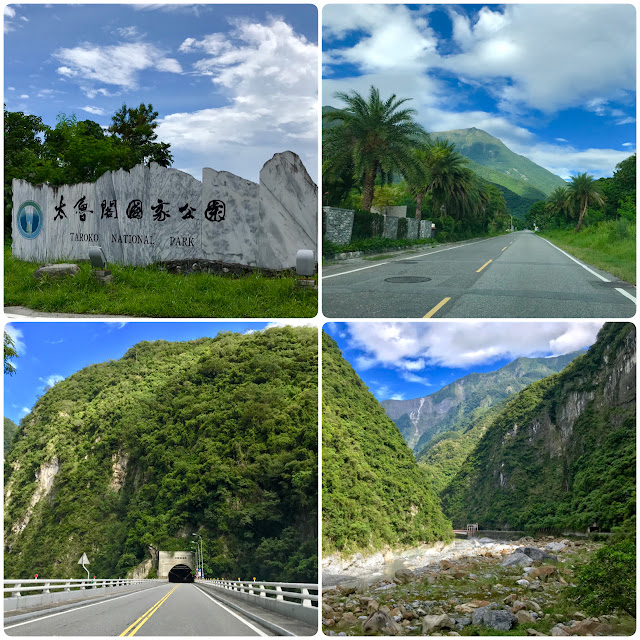 Finally made it to Taroko National Park at 8.30am. We were welcomed by the majestic lush mountains and blue skies!! 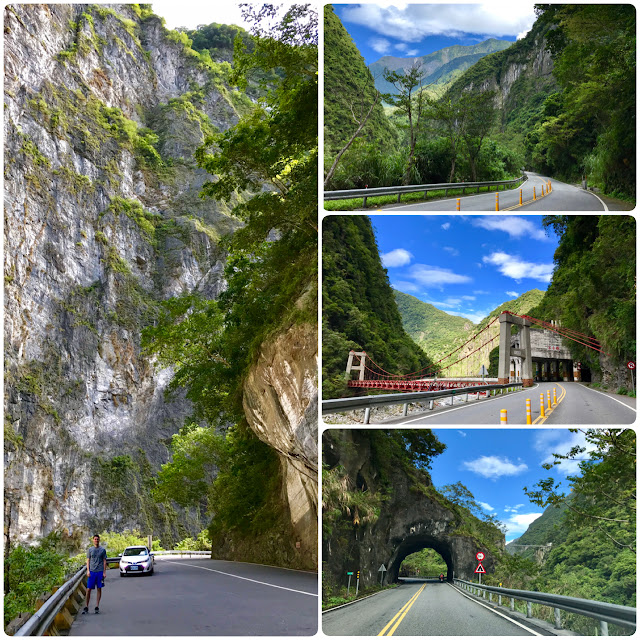 Early bird gets a car-less street. Driving is definitely the best way to explore this National Park. There was no entrance fee and all we did was drive along and stopped as we liked (safety first of course). 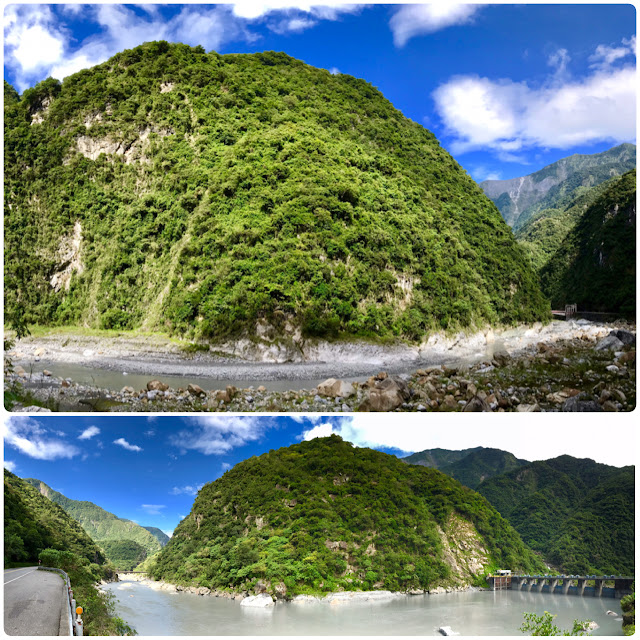 It was hard to capture the scale of the mountains, photos don't do this place justice. 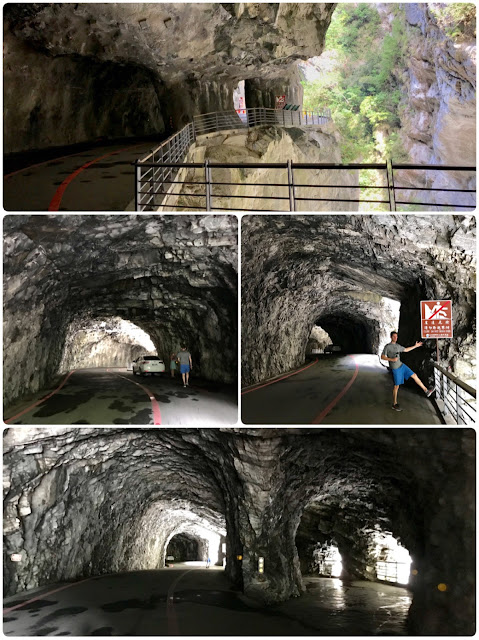 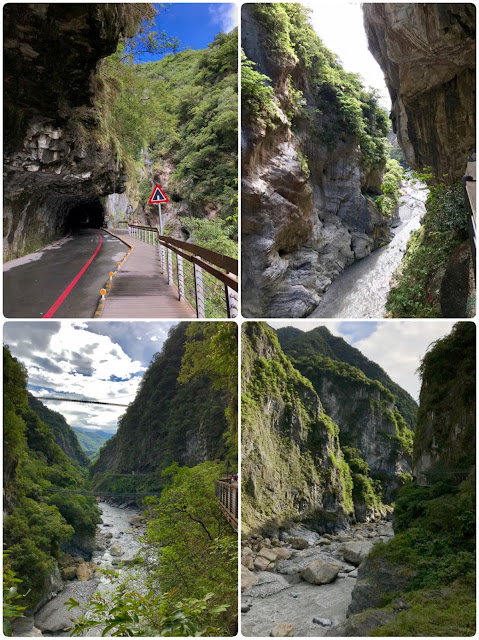 First photo stop was the Swallow Grotto Yanzikou Trail. The tunnels looked super cool. We were able to park in the tunnel and hopped out for a quick photo because we were the only ones there. You can see the river gushing through the narrow gorge from the tunnel. 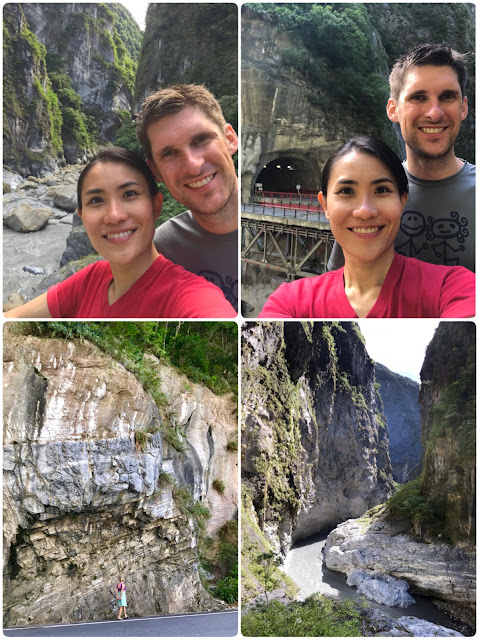 Selfie does not work here. There's no way to capture the entire scenery. 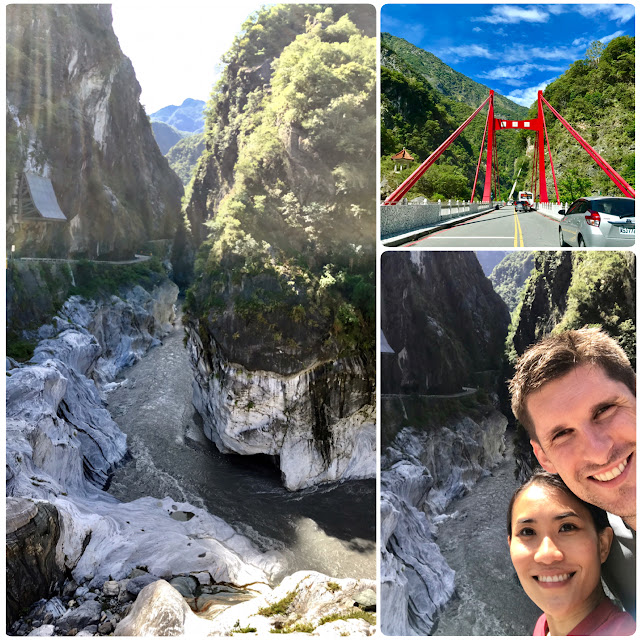 We were happily enjoying the road to ourselves until we came to this bridge and got 'stuck in traffic' for 30 minutes as they were doing some maintenance work. But looking on the bright side, it gave us plenty of time to take photos of the gorge. I used vertical panorama to capture the left photo. 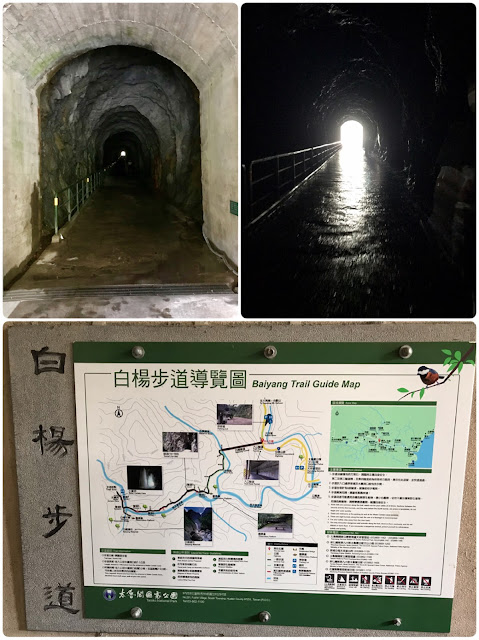 Finally, made it to the furthest point we planned to drive in the park...Baiyang Trail at 10.30am. This trail is a popular one because it's easy and flat, and took us approximately 2 hour (4.8km) return, including photo stops. The trail starts with an eerie walk through a dark 100m long tunnel. 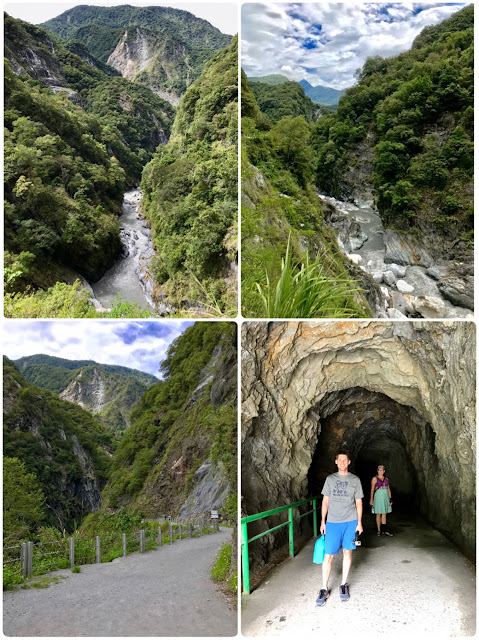 Followed by a cliffside walk along a flat path, passing through several tunnels. 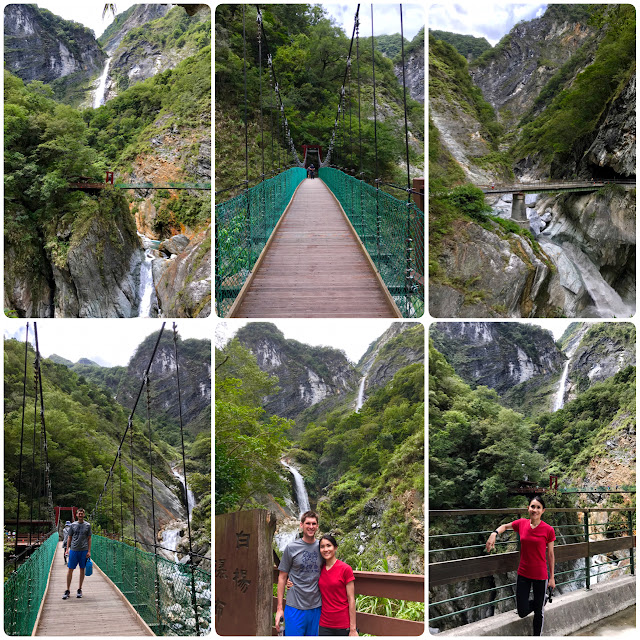 Towards the end of the trail, a suspension bridge connects the trail to an observation deck with a view of two waterfalls and overlooking the river basin. 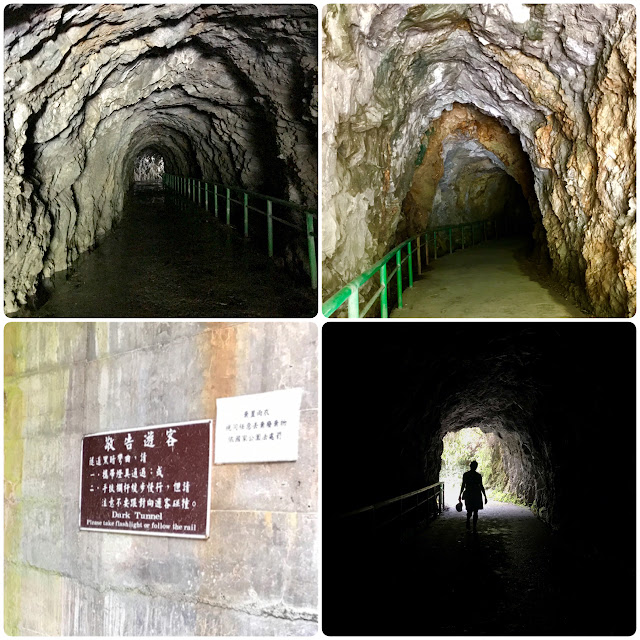 At the side of the observation deck, we walked through another dark tunnel that took us to the most interesting sight of this trail, in my opinion. 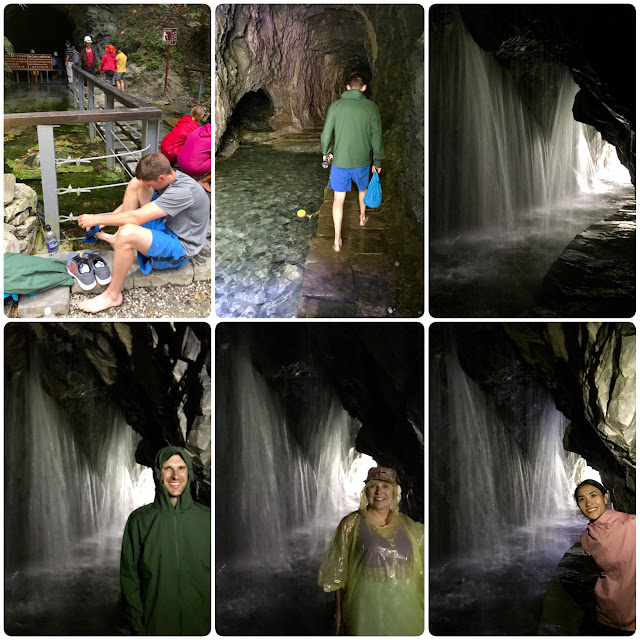 The Cave of Water Curtain. You are guaranteed to get soaked walking through this tunnel so we 'geared up' by taking off our shoes (should have brought flip flops and towel) and covering ourselves up in rain jacket. There is a narrow path on one side of the tunnel and you'll see water pouring through the cracks into the tunnel. It was dark in the tunnel and difficult to get photo of us in the cave itself. But I brilliantly had the idea of using my 2nd phone's flashlight to shine on us while taking a photo...haha!! We didn't want to get too soaked so we didn't walk all the way to the other end. 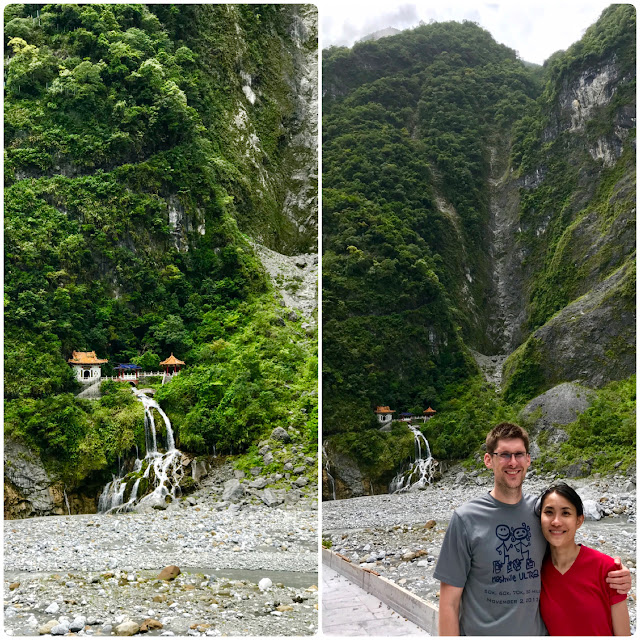 After a fun water curtain experience, we headed back to the car and drove to our final stop for the day...the Changchun Shrine. At this point, we were done walking/hiking so we decided to skip the walk to the shrine. 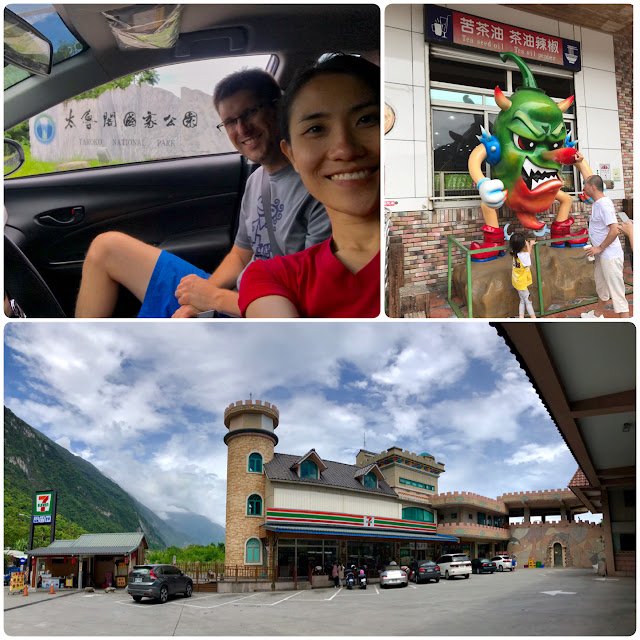 Goodbye Taroko National Park! Stopped at the coolest 7-11 ever and a rest area with angry 'chilies' on our drive back. 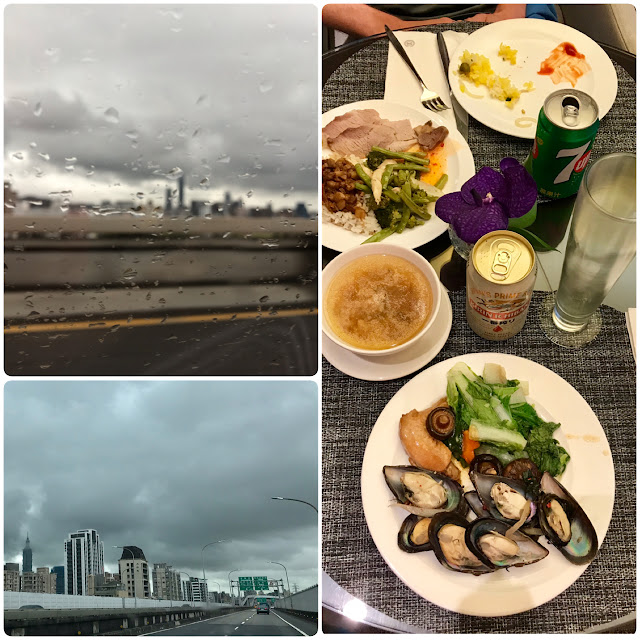 Made it back to Taipei around 4.30pm. It was a successful 12-hour day driving to and from Taroko National Park, with beautiful weather throughout our visit. It was raining on our drive back. Made it back to the hotel in time for another day of free dinner at the lounge!

For those who are interested to visit Taroko National Park, I'd definitely recommend renting a car and do a road trip there. If you have time and is flexible with your accommodation, spending a night in Hualien would be a good option. The total cost for our 2-days rental car with IWS was $133 for 3 person ($75 rental car + $33 gas + $5 tolls + $20 International Driver's Permit)...not bad at all! 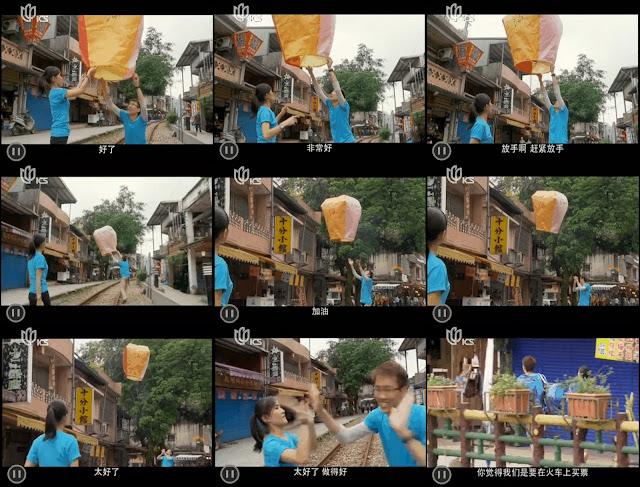 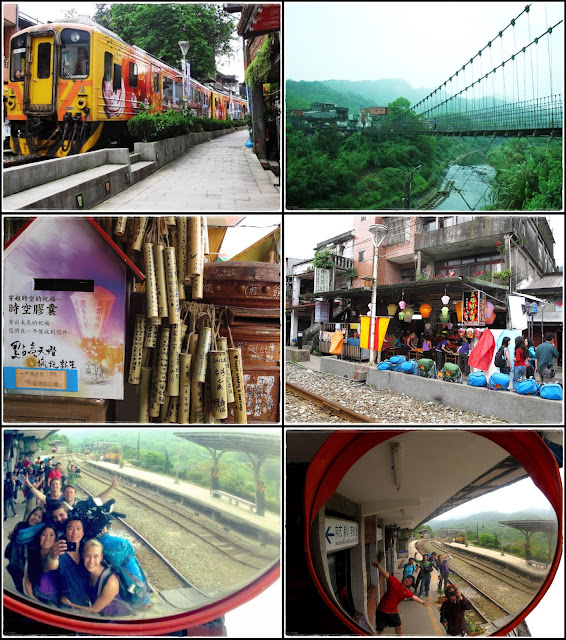 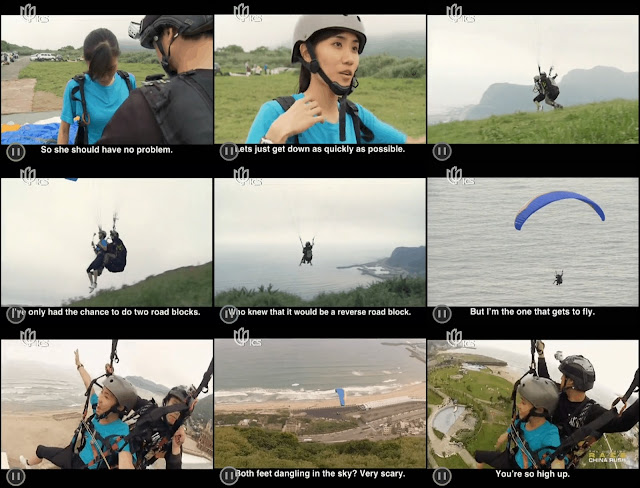 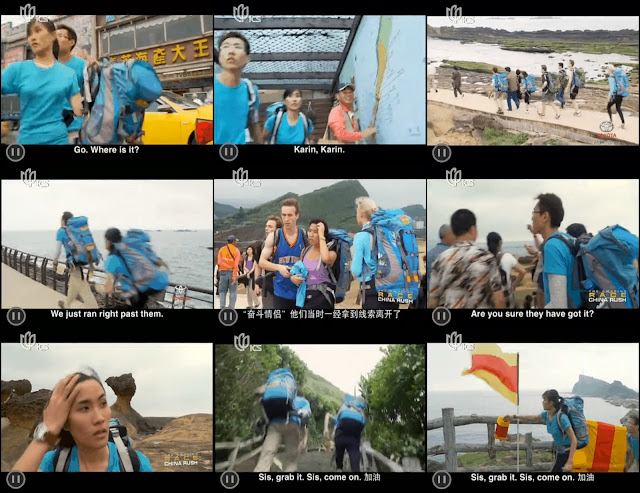 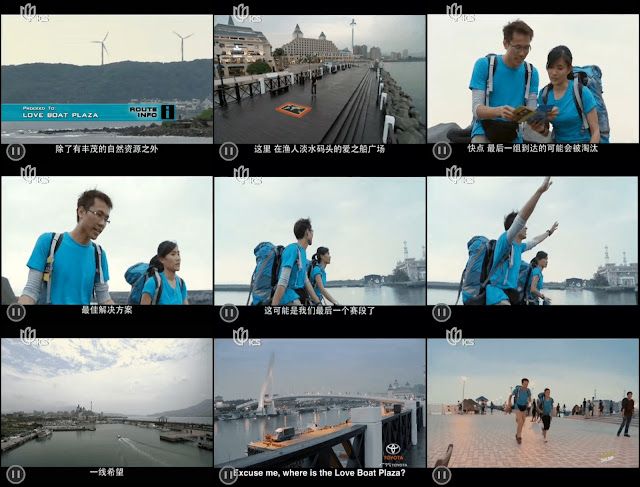 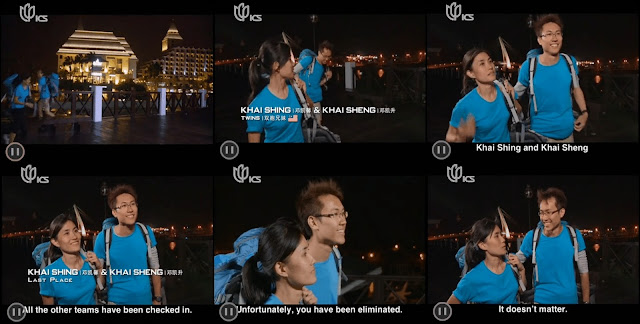 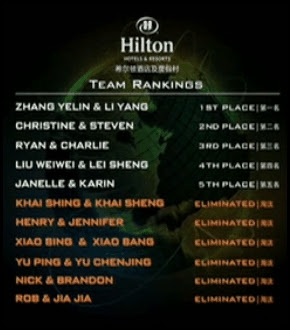 Result for Leg 8...our farewell episode