Touring KL?? Doesn't sound very exciting huh...hehe! :p Well...this blog post is not meant for my Malaysian friends to read la coz I'm sure you guys wouldn't be interested anyway. :p
So after Siem Reap, we continued our SEA tour in KL for a couple of days. Thanks to bro, cousin, and Rachel for hosting both of us while we were in KL. 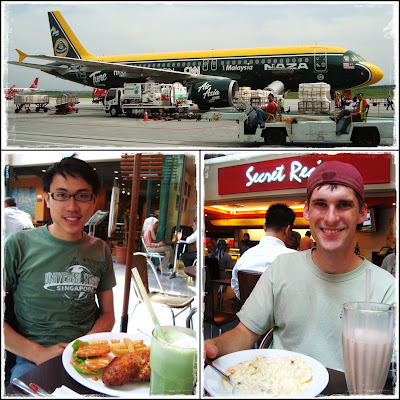 Our KL tour starts immediately after coming back from Siem Reap...had lunch at Secret Recipe in KL Sentral (introducing Daniel to our successful Malaysian franchise).

No car so had to travel by public transport...took the Monorial to the starting point of our free walking tour led by Sheng.

Another Sri Mahariamman Temple in KL.

Walk...walk...walk...just followed our 'tour leader'...gotta walk fast coz it was gonna rain. 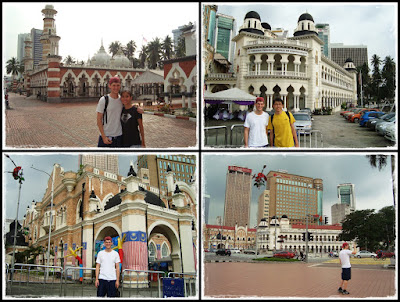 Masjid Jamek and ...dunno the names of those buildings. :p 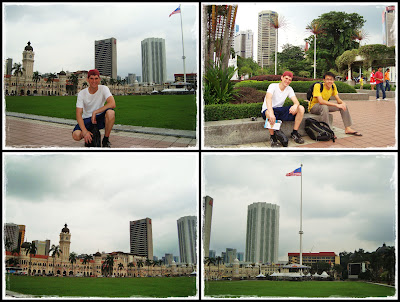 Merdeka (Independence) Square and the Sultan Abdul Samad building. Tallest flagpole in the world? They were setting up the stage for New Year's eve countdown.

KL looks quite nice from these pics huh?

Took  a break and had rootbeer float at Old Town after all the walking.

Don't remember the name of this temple.

Rachel generously pinjam-ed me her car for a day coz I had to go for an interview in the morning before continuing our tour in KL. Almost lost my way coz I didn't know how to go to Batu Caves. :p

Inside the cave...it's been a loooong time since I last came here. I was just a kid when I last came...I didn't climb the stairs at all coz I was too afraid of all the monkeys around so dad was the one carrying me up last time...haha!! :p 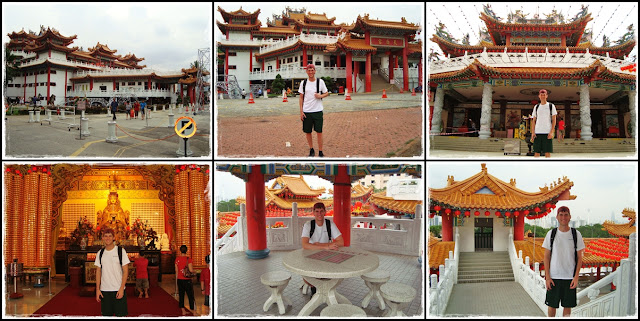 Another chinese temple again...Tian Hou Gong. It was my first time coming to this temple as well.

This temple was used as filming site for a lot of CNY albums. But Daniel thought Kek Lok Si was much nicer than this. :)

Woke up early hoping to get the tickets to go to the skybridge but we were too late...all the tickets were gone by the time we arrived. =.= 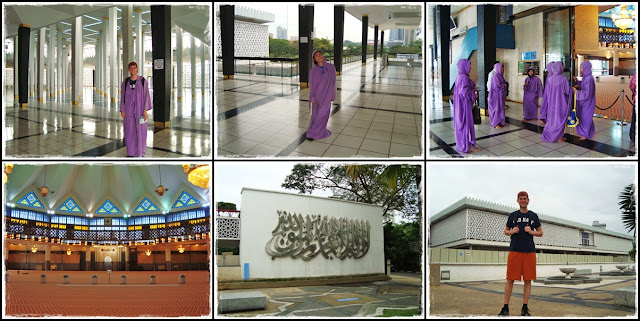 Upon Mr Daniel's request, we finally visited a mosque...the National Mosque =.= Had to wear this 'cool Harry Potter' robe to enter...why izit purple har??? All the tourists dressed like this...so weird la! 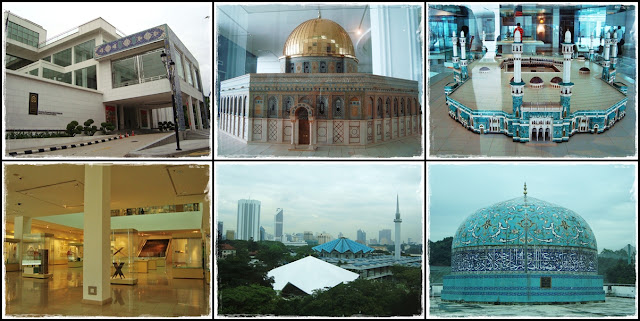 Another request from him...The Islamic Arts Museum. =.= Luckily I had my ISIC student card so paid less for entrance fee. Guess what's my favorite exhibit in the museum??
Answer: The Bench!! =.= 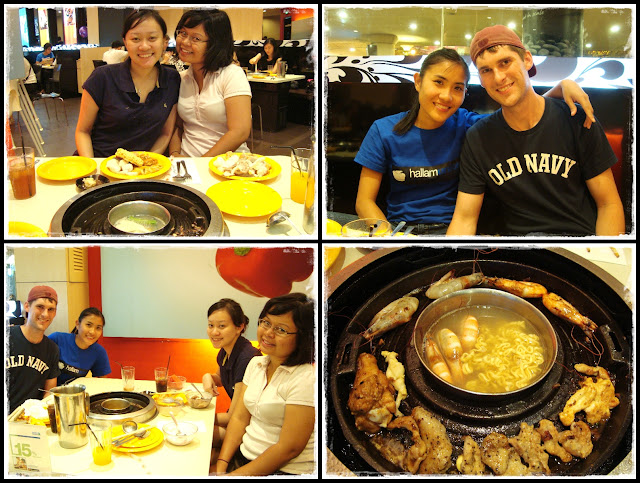 That's all for now...I'm actually on the bus back from KL to Penang...training ended today. I'd better stop typing before I puke...bouncy bouncy...this Konsortium bus driver a bit ganas lar. =.=

Since we decided on our wedding date back in January, I knew that I'll have tonnes of things to do within the month of December and I'll probably need to take the whole month off work. Very thankful that my bosses were considerate and helped to work things around so that I could marry-in-peace. =P Unlike others, even though we had one year to prepare for the wedding, there were a lot of things that we could only do when he gets here. The 2 main missions that we had to complete before the wedding was marriage registration and pre-wedding photoshoot.

I'll do another blog post about the marriage registration procedures coz it's quite troublesome to marry a foreigner and we had to make a trip to KL before we could commence the actual marriage registration procedures in Penang. So instead of flying directly to Penang, Daniel booked his flight from US to KL while I flew down from Penang to meet him. Not knowing how long it would take for us to complete the procedures in KL, we gave ourselves one week in KL and also had our 'mini-moon' before flying back to Penang.

2 Dec 2013 (Monday): After landing at LCCT, I had about 1.5 hours to spare before Daniel's flight lands in KLIA at 9.30am. I'm not a die-hard TVB fan but I knew that some TVB artists were in town over the weekend and should be flying back to HK that morning. Here come my 'paparazzi' skill. =P I had a quick look at the departure information for that morning and saw that there's a Cathay Pacific flight to HK at 10.30am so I knew that there's a possibility that I'll bump into them at the departure hall if my guess was correct. When I got to the departure counter for Cathay Pacific, I saw some fans and reporters waiting around so I was pretty certain that they will arrive soon and had my camera in video mode ready to be a 'paparazzi'.

After waiting for about an hour, we finally saw them arriving and walked into the arrival hall. In fact, I was only interested to see Captain Cool coz I didn't know whoelse came to Malaysia...haha!! Chilam was the first to walk in and I just followed in front of him and took videos, like a paparazzi. =P He was nice enough to stop and stand there for 5 minutes for the fans to take picture with him. Since everyone was too busy helping their friends to take photos, I decided to take a selca with him...hahaha...cool right? I continued stalking him as he was checking-in while the others went to stalk other artists. As I was leaving, I managed to get a glimpse of some other artists. What an interesting start for my KL trip. =)

Done with my ad hoc paparazzi work, time to get back to my real work of greeting my VIP - the fiance who just arrived after traveling for more than 24 hours across the globe.  =P It's been a year since the proposal trip last December...happy to be reunited again. =D We were planning to go to the US Embassy to get his a single status affidavit but it was too late when he got out of the immigration so first day was a rest day to get over his jet lag. 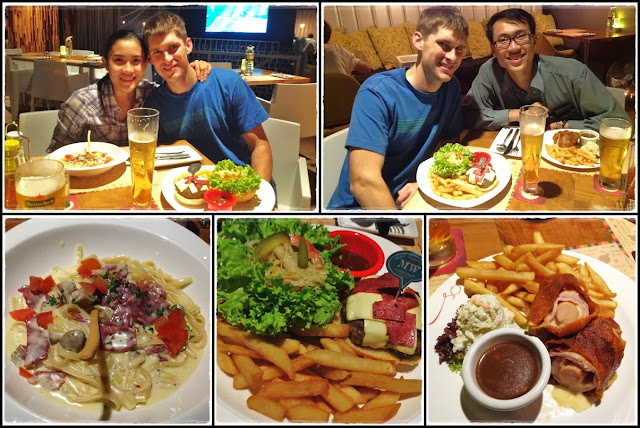 Western food for dinner at Souled Out. 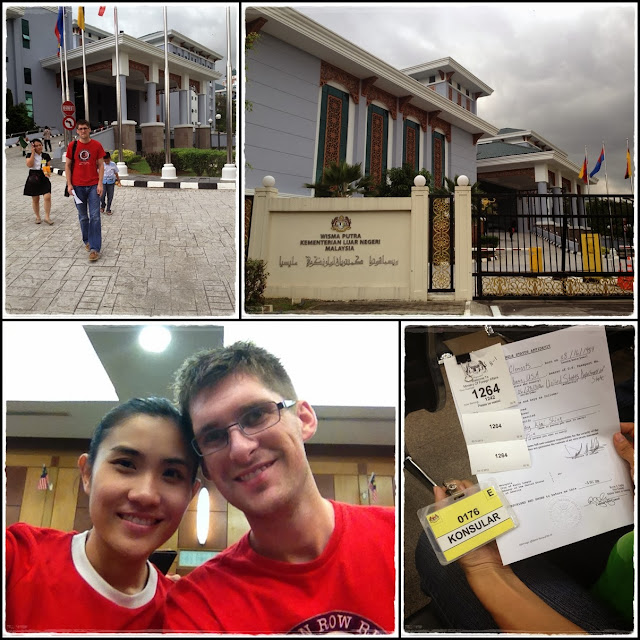 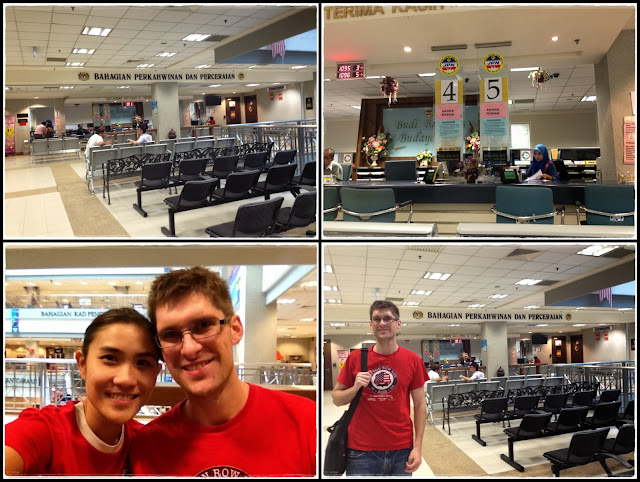 3 Dec 2013 (Tues): Drove around all day to different offices. From the US Embassy, to the Foreign Affairs Ministry and National Registration Department in Putrajaya. Very successful day coz we managed to get everything done in a day. I was impressed by the efficiency of the government departments coz I thought all these procedures would take a week. Thanks for proving me wrong. =) 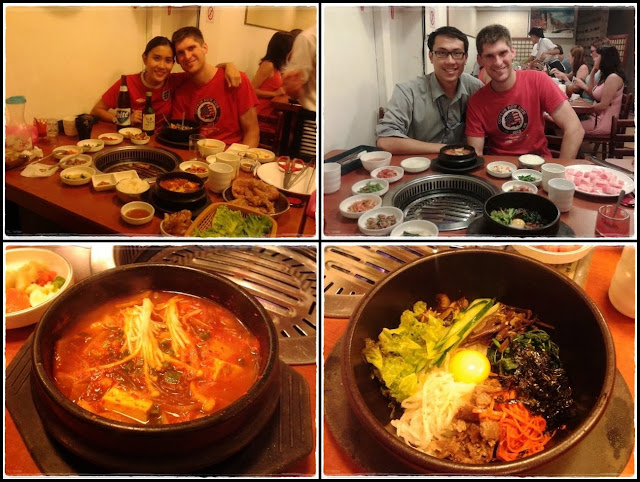 4 Dec 2013 (Wed): Chillax day coz we were done with our main task in KL. It's time for local food after feasting on international cuisines over the past 2 days. 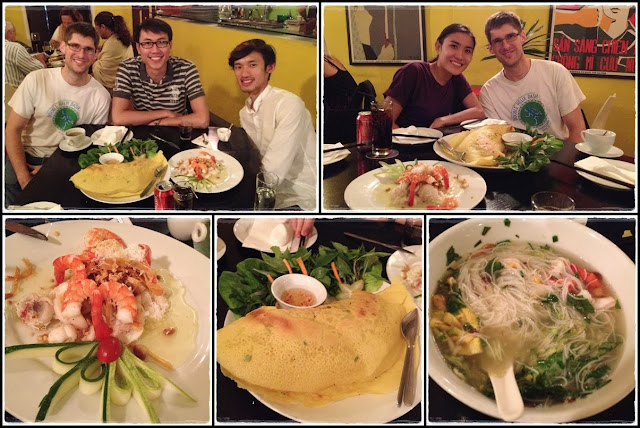 5 Dec 2013 (Thurs): Met up with Joshua & Shalinni for lunch at 1U then shopped for Daniel's shirt and pant for the wedding...our 'annual' shopping date. 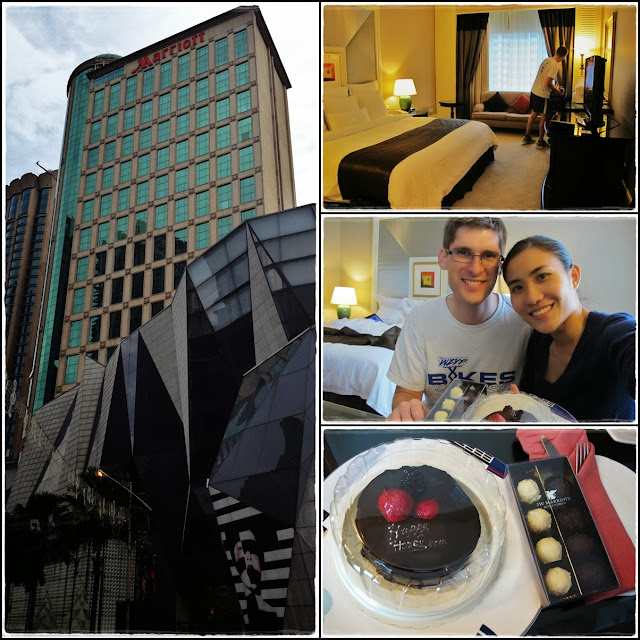 6 Dec 2013 (Fri): Since we didn't have time for honeymoon, we had our mini-moon in KL. Thanks to Marriott for the free night in JW Marriott KL. Also thanks to Ali for giving me the tips on getting this free stay. =P I mentioned briefly about our mini-moon when I made the booking online and the hotel surprised us with this complimentary cake and chocolates to celebrate our 'honeymoon', thank you JW Marriott. =)

Pavilion was right across the street...extremely convenient. 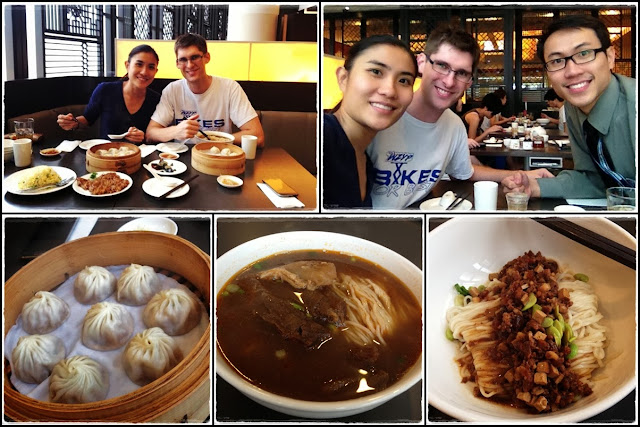 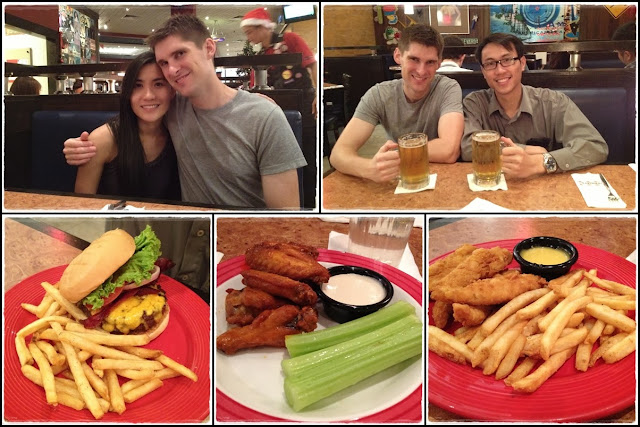 American food for dinner at TGIF.

If you haven't noticed, we basically squashed 1 year's worth of dates into a week. =P
"When you only have a limited amount of time with a person, you learn to appreciate and cherish every single moment you have with them." 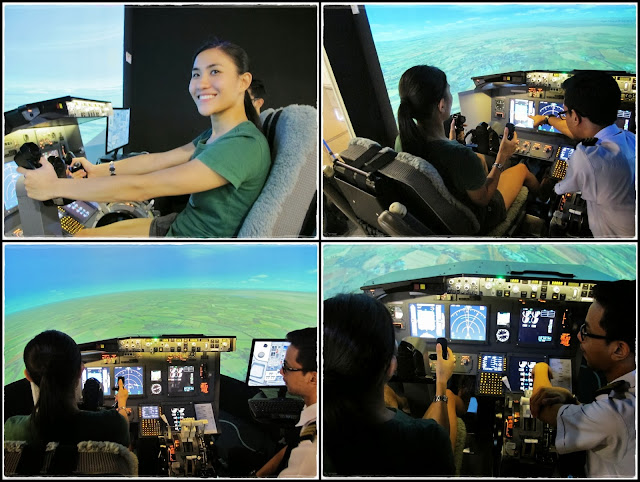 7 Dec 2013 (Sat): Since we had some time to spare before boarding our flight back to Penang from Subang airport, I decided to try out the flight simulator for Boeing 737 at SimFlight KL. I successfully crashed on my first landing...hahaha!! In fact, the pilot beside me was the one controlling the plane coz I was just focused on trying to stay on the dot...lol!!

This was the Airbus 320 simulator, more expensive than Boeing and it looks nicer for photos. Good that they allowed us to take photos in it. =P 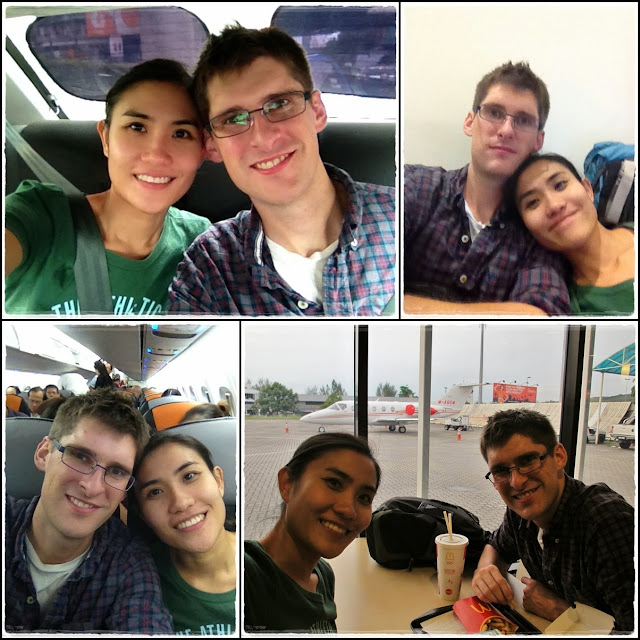 Mission accomplished in KL, time to fly back to Penang with my fiance! =P
Powered by