It was off-peak for me and I was 'advised' to clear some of my leave so randomly decided to take a short break to Hanoi...alone. This was quite a last minute decision so I booked my air tickets only 2 weeks before the trip...of course the tix were kinda pricey. =.= But I don't really have much options coz this was probably the best and only time for me to take some time away from work and go for a break this year. Besides, I'm neither a foodie nor a shopaholic so I guess it's fair to spend some of my hard-earned moolah on what I enjoy doing...i.e. traveling. =)

This was my first time traveling to Vietnam and I chose Hanoi over Saigon mainly because of UNESCO World Heritage Site - Halong Bay, while Saigon is perhaps just another crowded Southeast Asian city like Bangkok. :p

Coincidentally, 2 of my Vietnamese UGRAD friends (Diem & VietAnh) are also from Hanoi and VietAnh was back from the States for summer holidays so she offered to bring me around the city. Her friend, Hang was also kind enough to host me while I was there. I'm so so thankful for the warm hospitality that I received from my lovely Vietnamese friends. =) 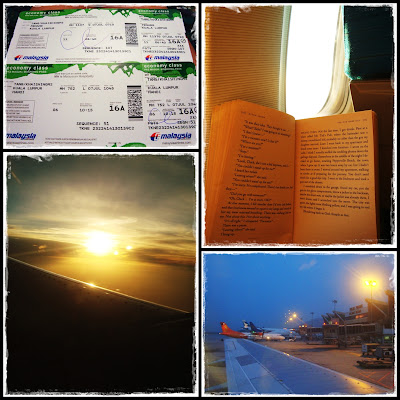 Heading off solo...first vacation all by myself. This explains why there aren't a lot of pics of me.

Arrived Hanoi Noi Bai airport at noon and was welcomed with 35 celsius heat. =.= VietAnh and her cousin came to the airport to meet me and we took a public bus (w/o air-con) back to the city together...a truly local experience...haha!!

It has been 2 years since I met her and we've got so much to catch up so we were talking all the way in the bus. Some other passengers were staring at us as if we were aliens and one lady even told my friend in Vietnamese asking us to shaddup...lol!! Well that's not very nice but I can totally understand that coz tourists don't usually travel by public buses and the locals from outskirts are not very comfortable with people speaking in languages that they don't understand.

Stopped by VietAnh's house for a short break and cool down a lil'. Her parents run a small cafe biz at the ground floor of their house and they made me a bowl of Pho...yummy! Honestly, I think Pho is kinda like our Koay Teow Th'ng. :p 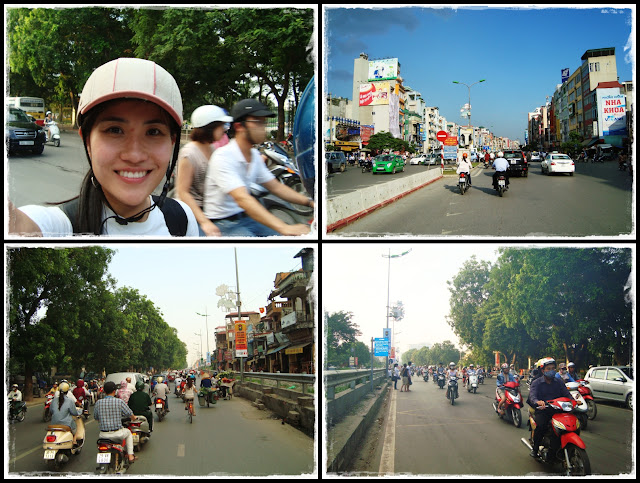 Another truly local experience...rode on a motorbike on the streets of Hanoi!!! There were soooo many motorbikes and the traffic was crazy. They could do a u-turn almost anywhere on the road. Everyone keeps honking I dunno for what and some honks even had echoes. =.= Crossing a street was almost mission impossible...I could hardly find a gap to cross the road safely.

This was my accommodation for this Hanoi trip...nice house with nice view. The houses in Hanoi are narrower but taller...theirs had 5 floors. =) Million thanks to Hang for hosting me.

Woke up early and had Pho (again) for breakfast with Hang's dad before he dropped me off at the meeting point for my 2d1n Spectacular Halong Bay tour. 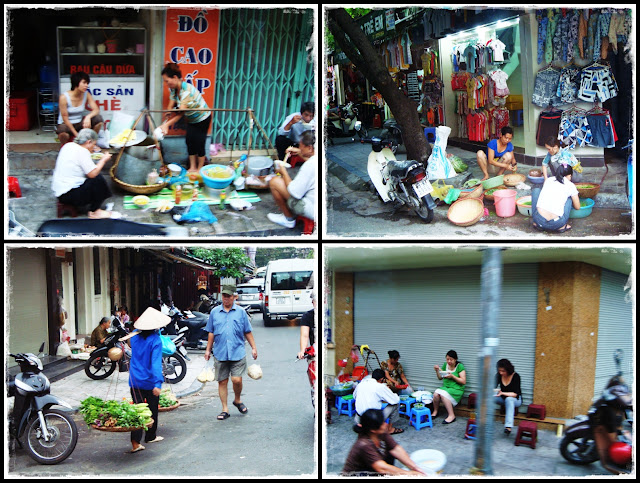 Some snapshots of local lifestyles 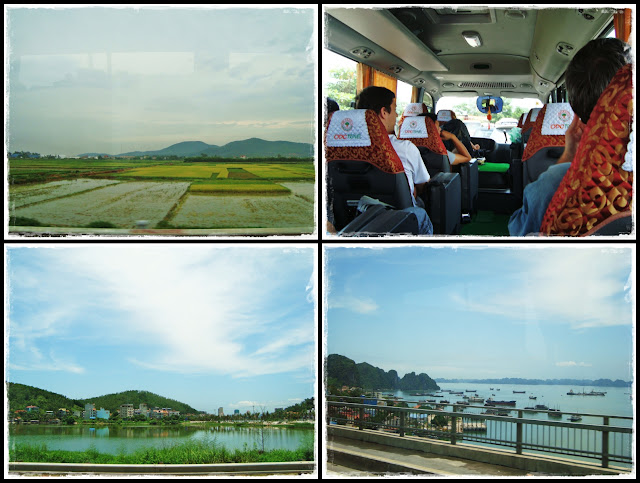 The journey from Hanoi to Halong took 4 hours and all we saw was fields after fields!! There were a total of 11 people in our tour group...mostly angmoh apart from a Vietnamese American & I. Most of the angmohs were traveling all around Southeast Asia so they were sharing and exchanging info among each other. It was pretty interesting listening to the conversation between 3 Irish girls and an Australian-Canadian couple.

Finally arrived the pier after 4-hours of bumpy ride...luckily I didn't puke. The pic on the right is our junk (p.s. junk as in jung...not trash). :p

Tadaa....my room on the junk!! I paid $10 extra for single supplement and got to enjoy this whole room for myself. =) Nice view from the window too!! 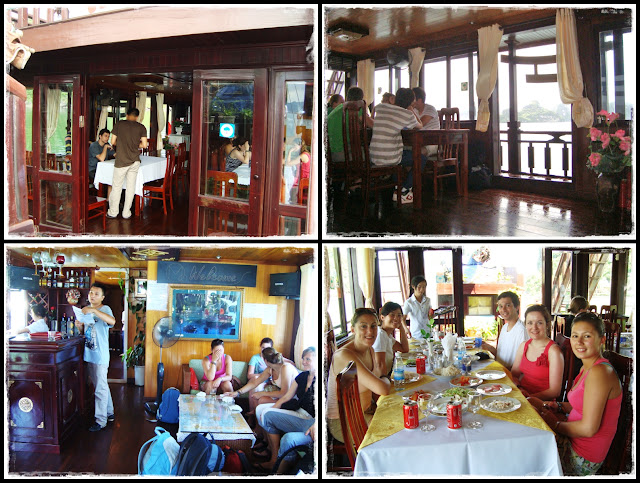 The dining area on the boat where we had all our meals. We had a pretty good mix of nationalities on the boat...Irish, Canadian, Australian, Belgian, American, German, French, Vietnamese and Malaysian. =) 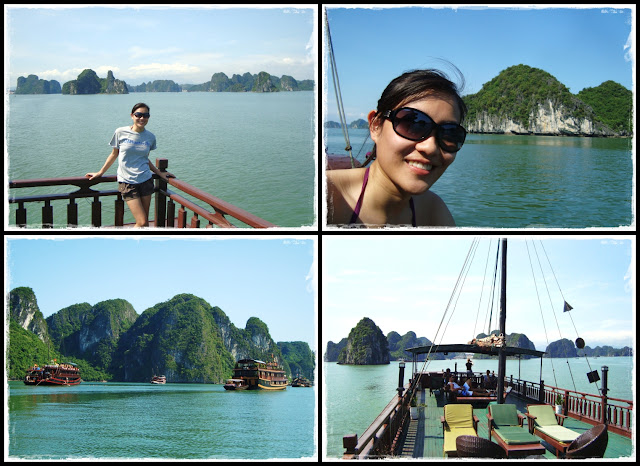 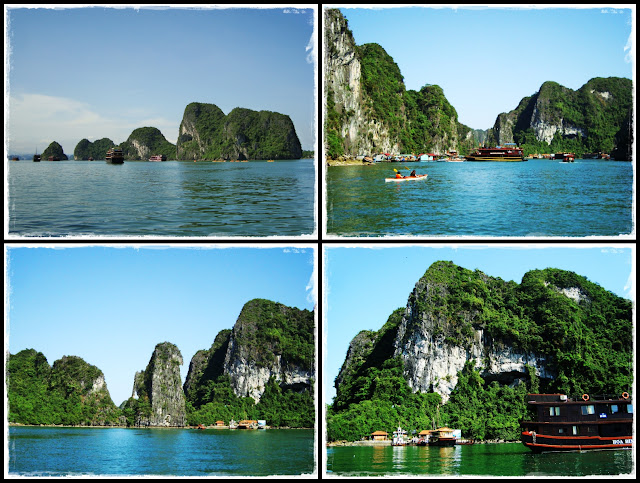 Countless limestone karsts and isles in various sizes and shapes as we sail through Ha Long Bay. All I can say is pictures really don't do justice to the beauty of this place. It was so relaxing enjoying the sun, breeze and scenery...absolutely breathtaking!!! 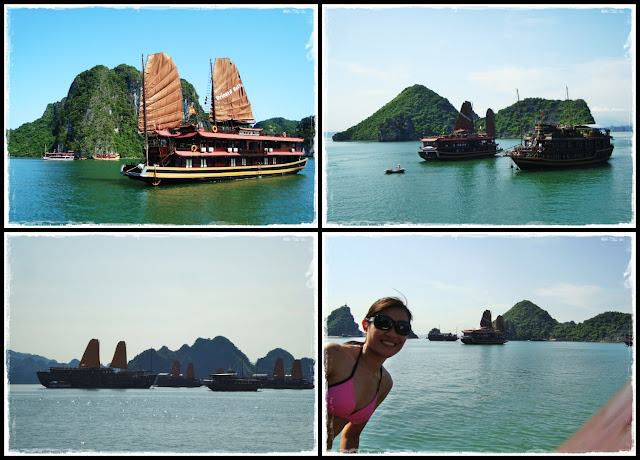 Another thing that complements this amazing scenery is the traditional chinese style junks.

View of the bay from the cave.

We were given an hour to kayak aimlessly...luckily the one who was kayaking with me knew how to kayak or else I would be exhausted. 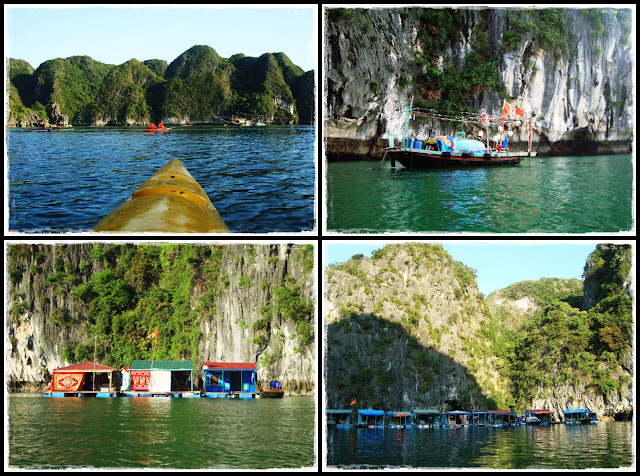 Saw some floating houses around that area...kinda similar to the ones we saw in Tonle Sap lake. Their houses are small but it ain't too bad coz they have such nice views everyday while we had to pay $100 just for 2 days. :p

Time to swim...or should I say jumping of the boat! :p Few of us 'bo kia si' people took turns to jump off the boat from the top deck...very cool!! In fact I didn't even know how deep it was. :p 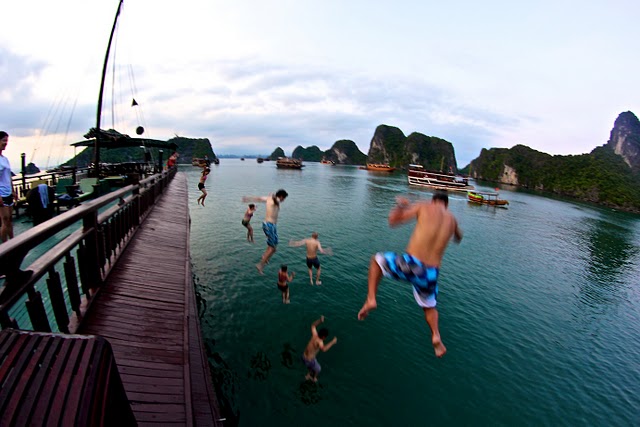 Our tour guide suggested us to all jump together...I'm the one at the furthest end. Credits to Kayla for this AMAZING pic!! She's currently traveling around SEA...checkout more pics on her blog. 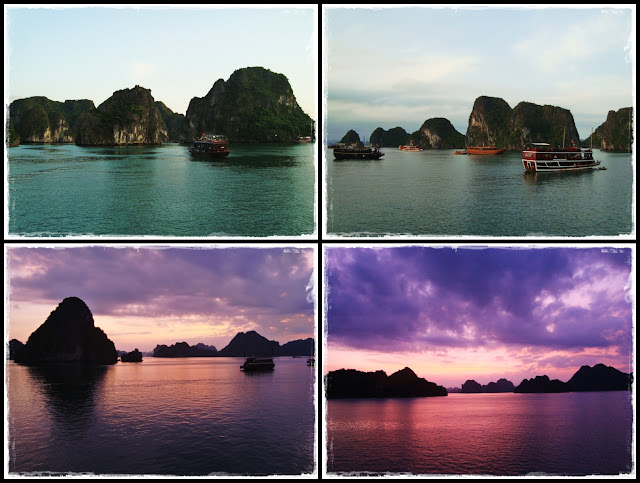 Enjoying the dusk before the bay fades into total darkness.

Demonstration of how to make Vietnamese spring roll before dinner.

Woke up at 5am hoping to see sunrise but our boat was anchored at a very 'strategic' location. An isle totally blocked my view. =.= Instead of sunrise, I saw rainbow. 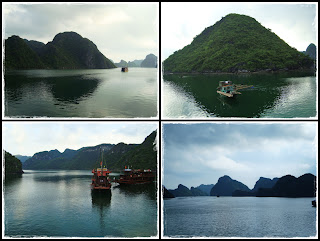 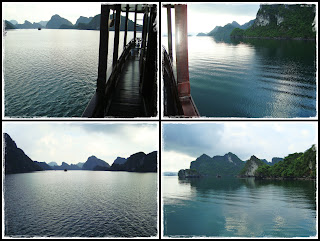 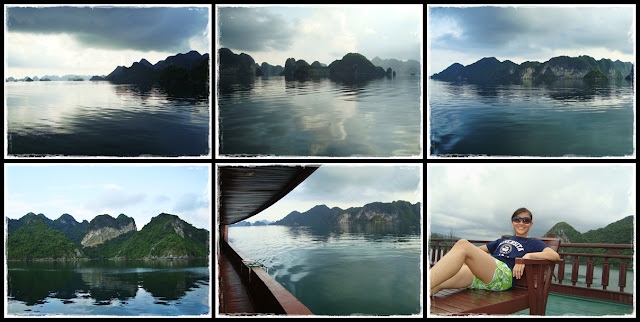 Yes I know all the limestones looks similar but I still can't stop taking pictures coz I was too bored. :p 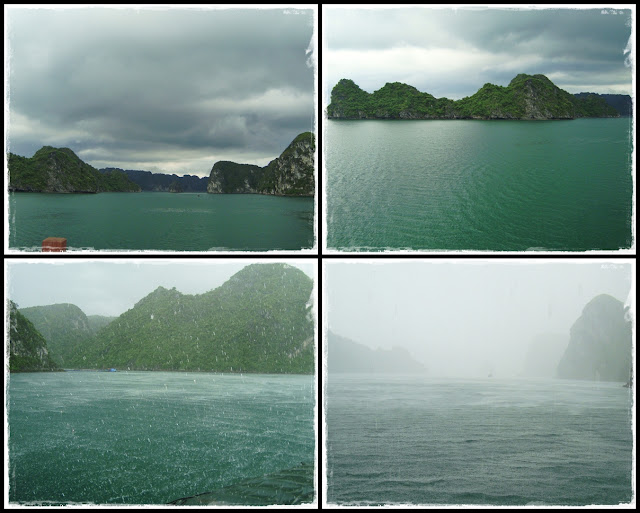 The sky got darker and finally...pouring rain...and we were out on the junk in the middle of nowhere!! The wind was strong but surprisingly our boat didn't rock much. All of us had to stay indoor with nothing to do. =.= 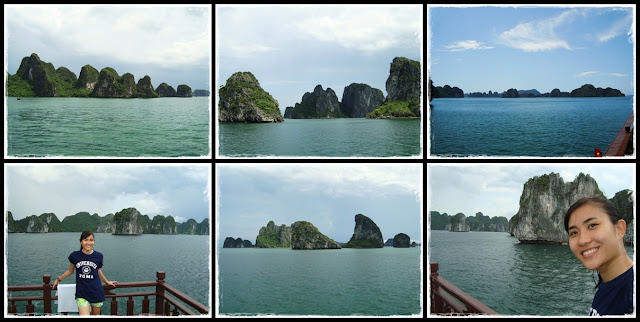 Rain stopped so went back up to the sundeck to enjoy the scenery...and took more pics. :p 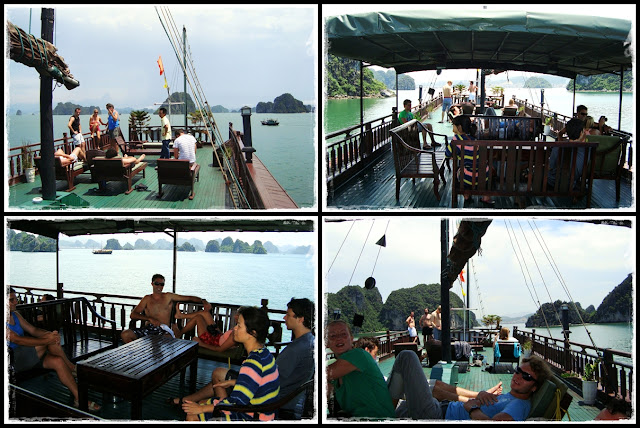 Chilling at the sundeck for the rest of the tour. 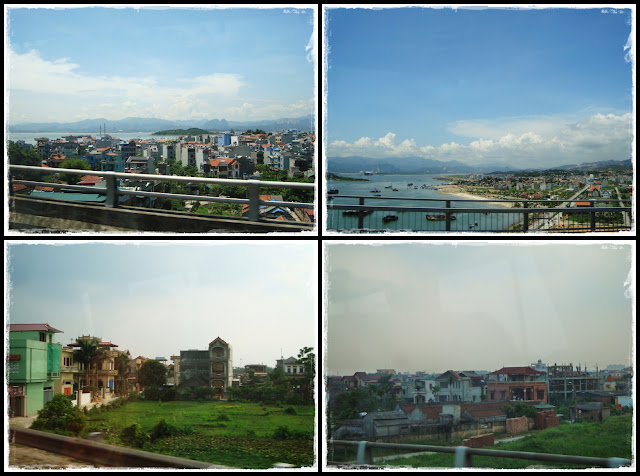 After lunch, it was time to say goodbye to tranquility and head back to the hustle and bustle of Hanoi.

Thanks Hang!!! =) We were supposed to meet up with VietAnh but she couldn't make it for the dinner.

Went for a stroll around Hoan Kiem Lake. The translation of Hanoi in Chinese means a city between the rivers. I guess that's why they have so many lakes...should be called 'city of lakes' instead. :p

First stop...Museum of Ethnology. I'm not a fan of museums but one of the statue exhibit caught my attention...haha! If you still don't know which 1...it's the bottom left pic. :p

I haven't mentioned...Hang and VietAnh was my tour guide for the day...thanks gals =) It started drizzling when we were at West Lake...

...and I insisted on walking in the rain all the way to the Ho Chi Minh Mausoleum...I was soaked...haha!! :p

It was pouring again so we took a cab to the Old Quarters for lunch. 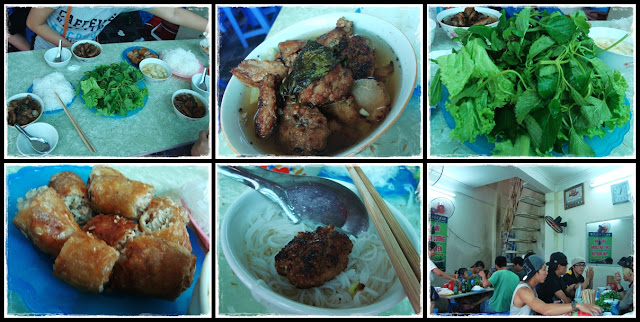 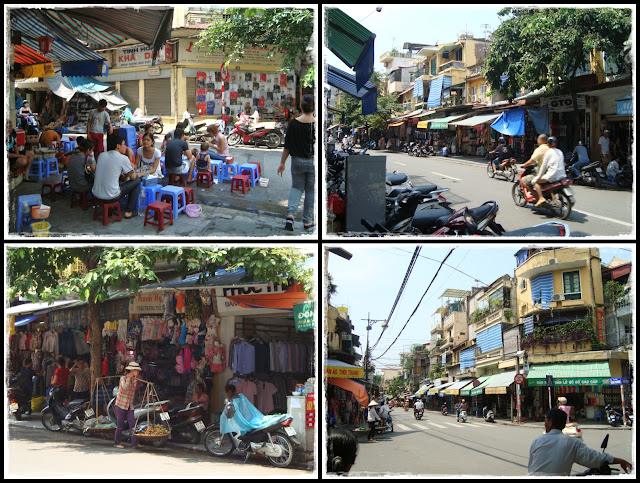 Hanoi used to be an administrative center for the French colony of Indochina and the buildings are very much influences by the French colonial architecture style. I was expecting the Old Quarters to be sort of like the French Quarter in New Orleans but it was nowhere near...haha!! It was more like the old small streets in Georgetown.

I didn't get to take pics of these French style buildings in Hanoi so got these from internet instead. I wanted to go to the Hanoi Opera House (left pic) but didn't coz it was raining already. It looked quite similar to the National Opera House I saw in Paris.

Another French colonial style building...Saint Joseph Cathedral. We decided to call it a day after visiting this church coz it was gonna rain. We thought we were lucky coz it only started to rain heavily after we got in a cab but a fallen tree blocked the road to Hang's house so we had to run in the rain and I was totally soaked. =.=

Big thank you to Hang & VietAnh for being such great hosts!! =) I would be more than happy to host when y'all visit Malaysia! 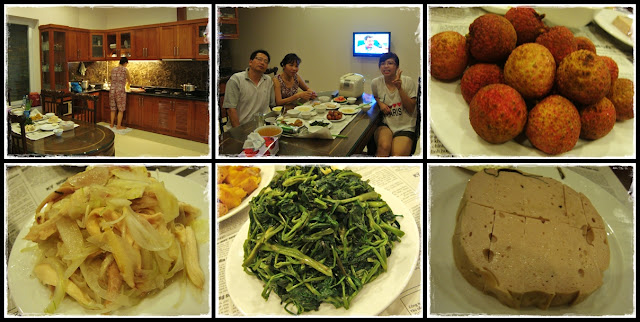 Another truly local experience...a meal with Vietnamese family. =) Had Hoi An chicken that Hang made, kangkung, gio & lychee! 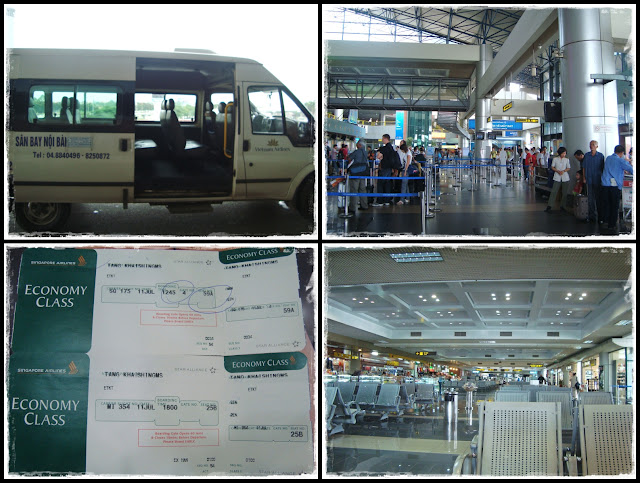 Time to bid goodbye to Hanoi. If anyone plans to go to Hanoi...rmb to take Vietnam airlines bus to and from the airport coz it's really cheap ($2) compared to a cab ($16). =)

Guess what I was watching on Singapore Air?
Powered by