Siem Reap, Cambodia: 23-27 December 2010
I was the one who suggested Cambodia to Daniel...reason being he loves historical stuffs (very 'ngam' him) and I also haven't been there before. :p We had a tour guide who brought us around for 3 days...he shared lotsa knowledge and stories...was pretty interesting actually and I could even answer most of his questions. But now I forgot everything already...couldn't even remember the names of the places we went...lol! I'm asking Daniel to help me with this coz he made notes during the trip...or else all the captions would be "some random stones/temples". =.=
If you wanna ask me what's my impression of Siem Reap...I would say it's kinda like Malaysia during the 70s-80s. Lotsa dirt roads, kids running around the streets without shoes, etc...can see more from my pictures. Traveling to these places makes us realize how lucky we are to be living in abundance.
December 23 (Thurs): KL - Siem Reap 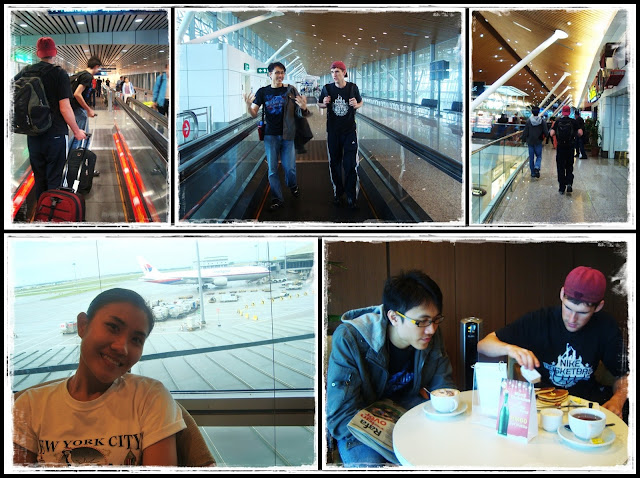 Woke up early to catch our flight from KLIA.

Kingdom of Cambodia from the sky. 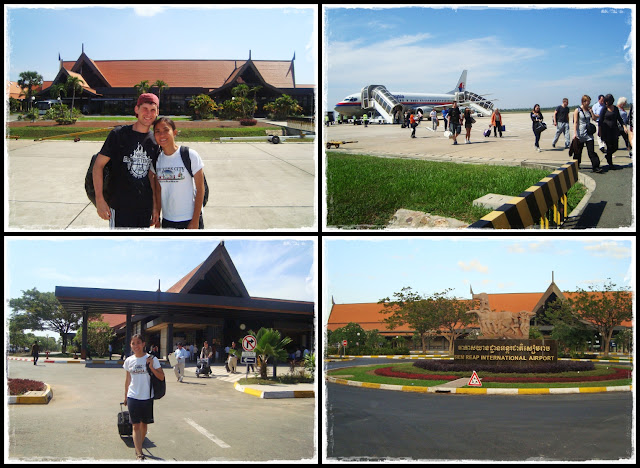 Checked in Hotel 89 but they were overbooked so the manager gave us a complimentary stay for a night at another hotel nearby. 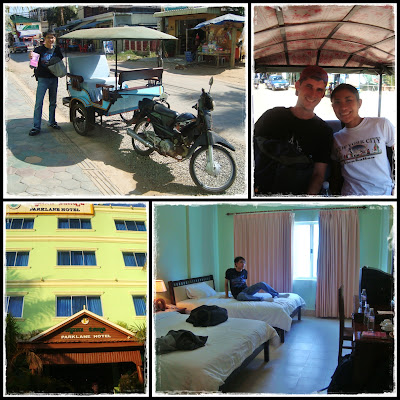 Very bouncy ride on the tuk tuk to the other hotel.

There's this one street with lotsa pubs and restaurants...lotsa tourists as well. 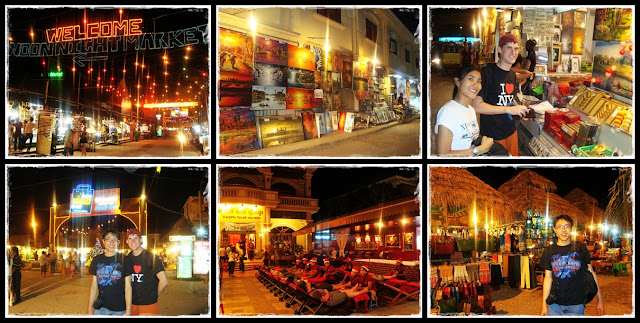 Walked a pretty good bit through this mud road into another temple inside the jungle.

Ta Keo Temple. Stairways to heaven?? According to our tour guide, the steep and uneven steps signifies that it's difficult to go to heaven...but we managed to make it to the top. :) But when we wanted to get down from the other side...the steps were even steeper and it looked pretty scary so we decided to go down from where we came...or else we'll be going down straight to hell. :p 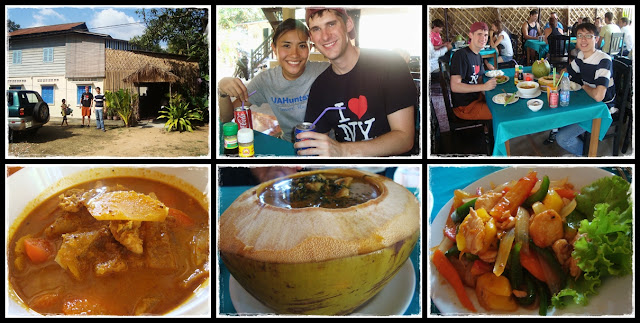 Lunch at a local 'kampung house' restaurant. Tried some Khmer food too. 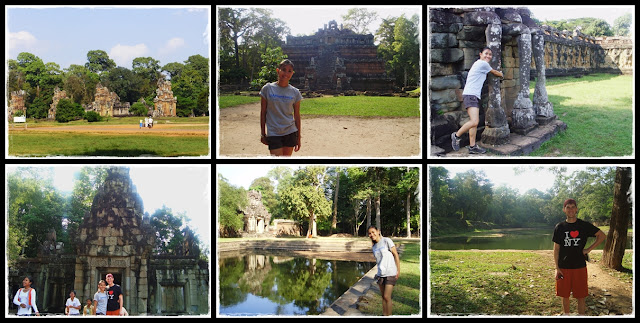 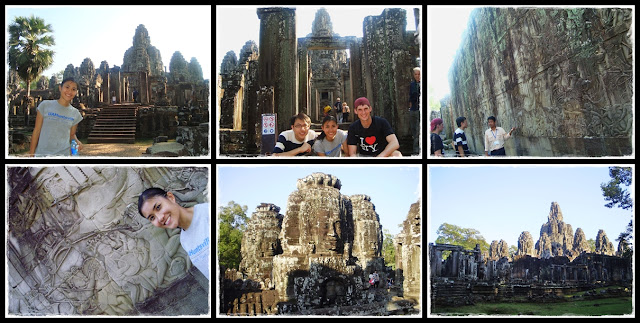 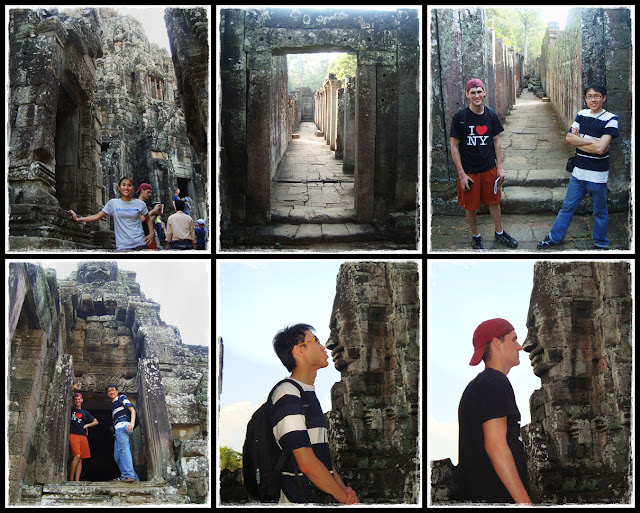 Bayon. Temples with many faces. 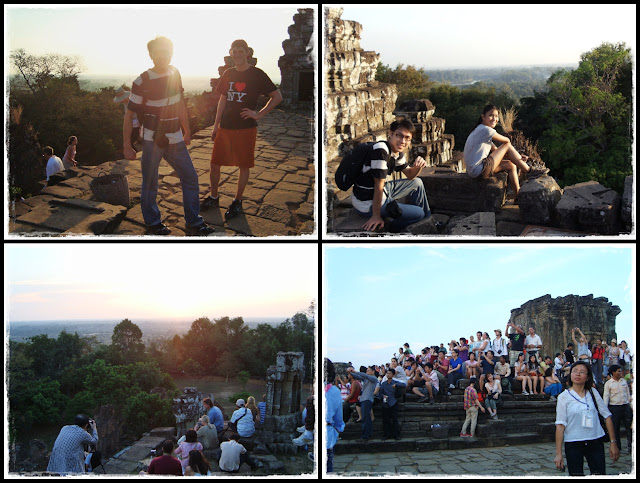 So many people waiting to watch sunset.

Too free while waiting for the sun to set so took pics of our shoes...all filled with dirt after walking all day. 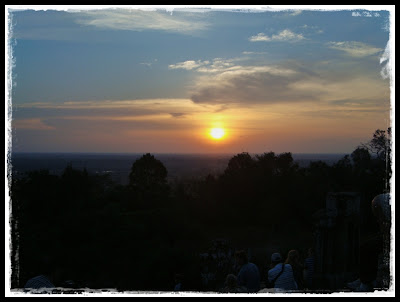 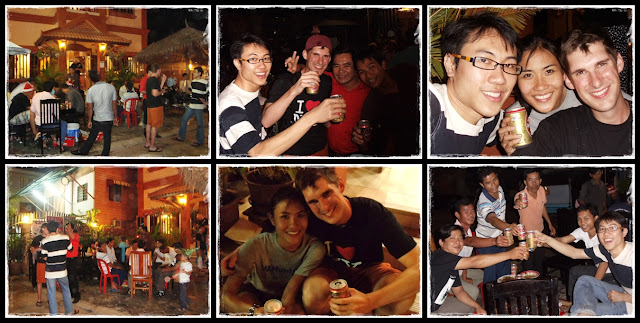 We were surprised by the hotel employees when we got back. They were having a Christmas eve staff party so invited us to join 'em as well. They were all very nice and friendly.
December 25 (Sat): Christmas Day at Angkor Wat 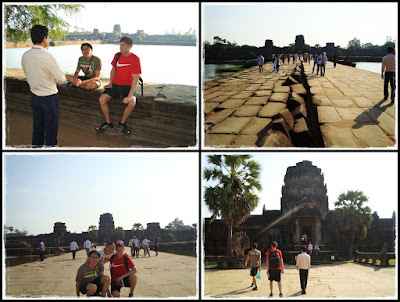 Story-telling session before we start our Angkor Wat tour. This temple has been restored by the French and is one of the most well-preserved ruined temples in Angkor. The road that leads us to the temple is only half restored to show us how it used to be. 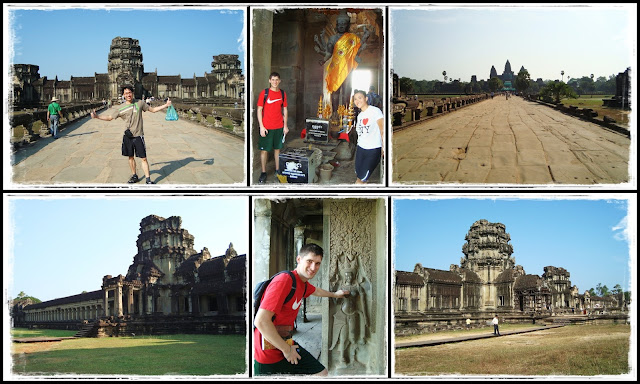 Excuse me Mr. Daniel...no touching the Apsara's boobs please. :p So many people have been touching this part that it has become more shining than the other parts of the carving. 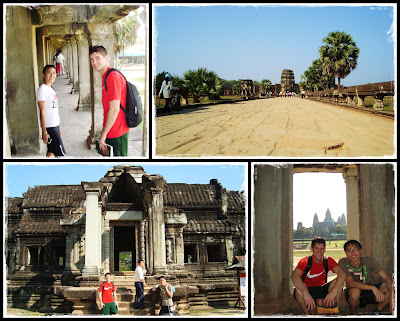 Climbed the stairs again to get a birds eye view.

View from the top.

Like the middle pic that bro took for me. =)

I was busy taking video while walking down the steps and the lady behind me was kinda impatient coz I was walking slower...I bet she just wanted to get down asap coz she was scared...haha! :p 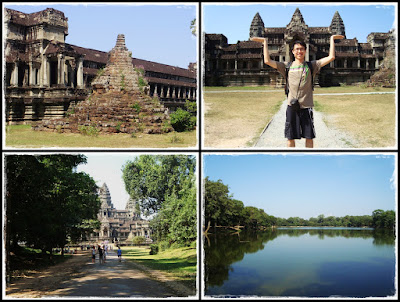 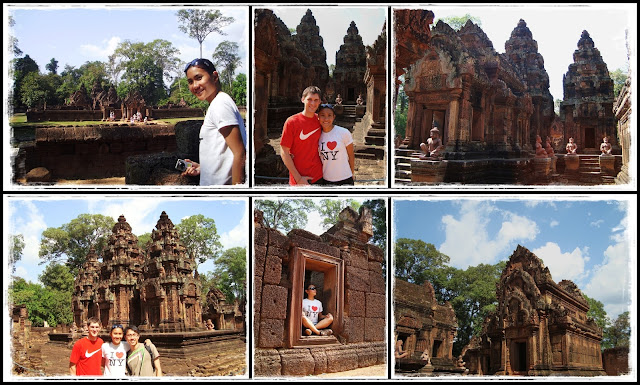 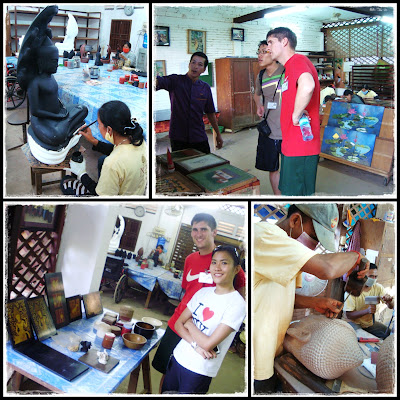 Visited the Angkor Artisan School to see how locals learn to do craft work. 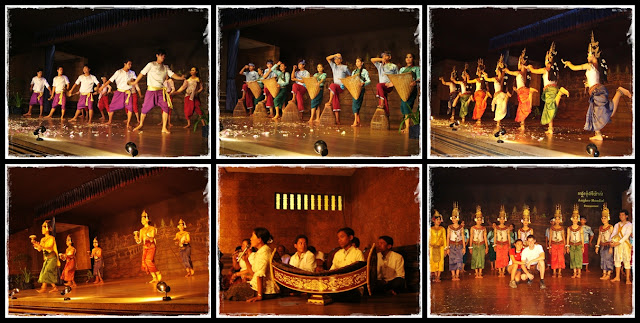 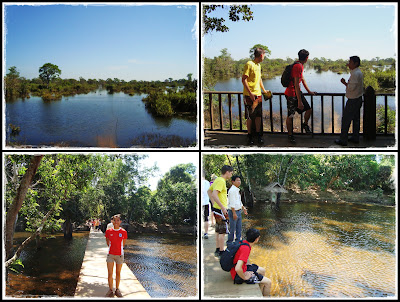 All the temples here are surrounded by moat. 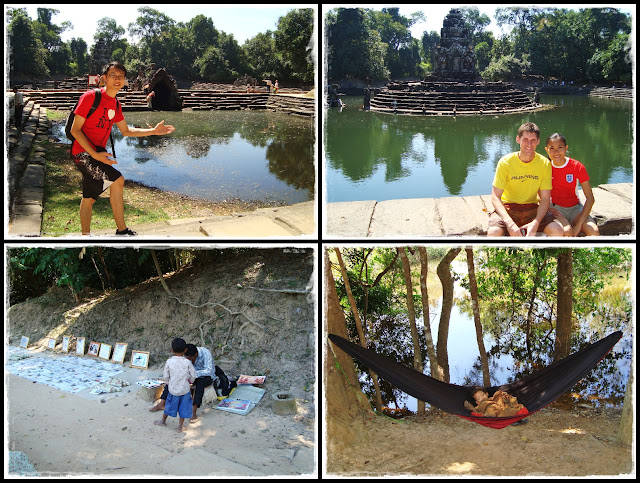 Neak Poan. That baby enjoying his nap on the hammock while the mom is busy selling stuff.

Tasom Temple. Dunno why most of the kids like to ask bro to buy stuff from 'em...I always get to escape coz I'll strategically walk behind bro and Daneil...hehe!! 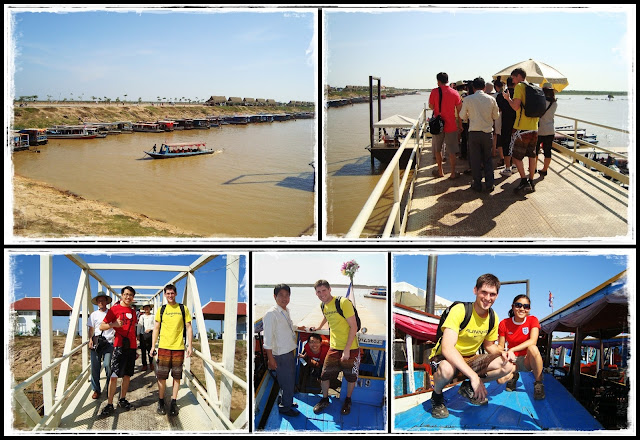 At the jetty to board our boat for the Tonle Sap tour. 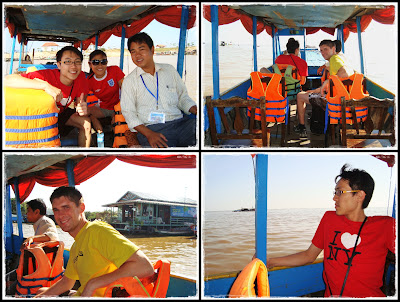 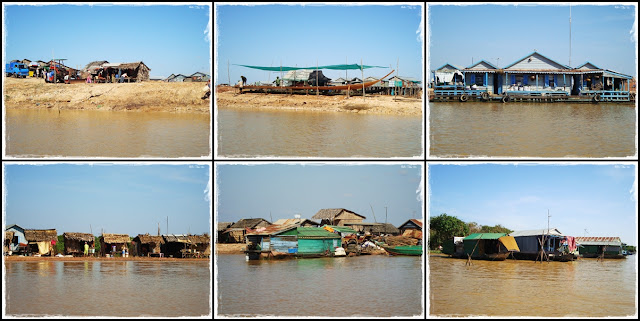 These are mostly settlements of Vietnamese who came across the border to Cambodia during the Vietnam war. The water level changes throughout the year and these people have to move around during rainy season. 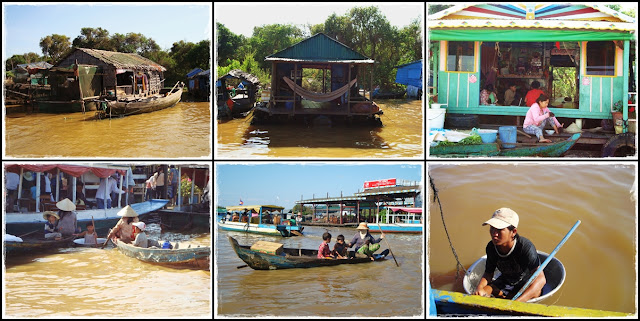 Can you imagine yourself living in these places? Most of 'em doesn't have a bed...their bed is the hammock. Those kids sitting in the basin are actually beggars trying to get some money from tourists. Life is definitely not easy for them huh.

These kids scare me off coz they were trying to sell these snakes to us. I didn't wanna be mean but please...get away from me coz I don't like reptiles! 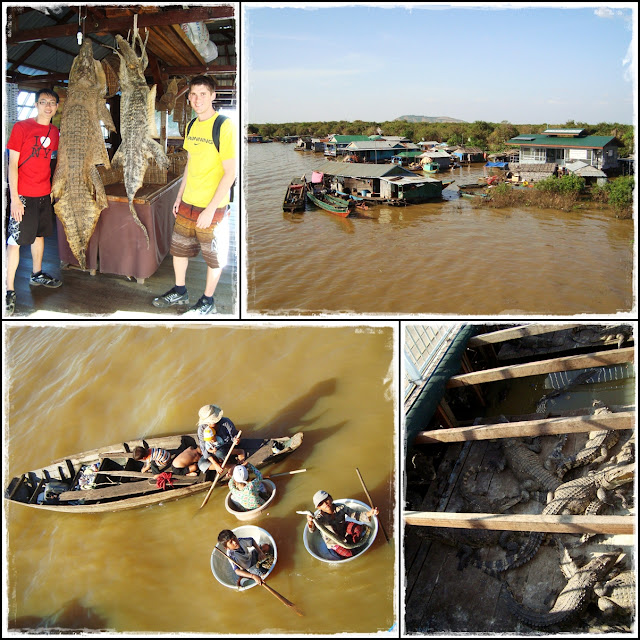 This was definitely not my favorite stop at all...snakes and crocodiles...no no no!!

The lake is the playground for these kids.
December 27 (Mon): Goodbye Siem Reap! 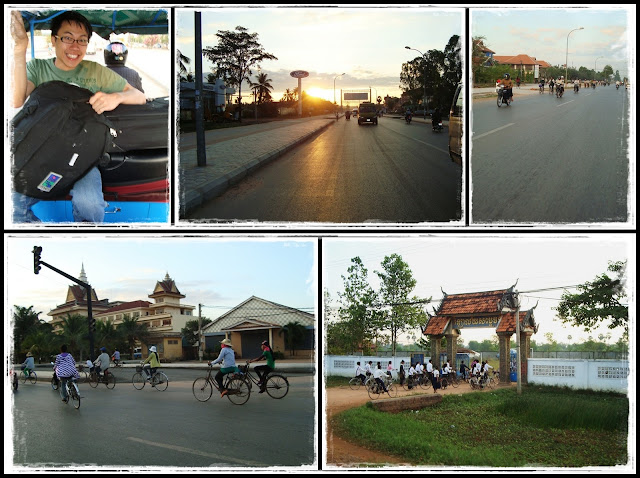 Free shuttle from hotel to the airport = chilly tuk tuk ride with all our luggages early in the morning...very "chi kek". :p

This trip was really a good eye opener. We had the chance to talk to the locals and learn so much about their lives...they may not earn a lot but I can see that they are contented and happy. Hope that their tourism industry can help to boost Cambodia development.
Powered by