6th day of our trip and we've pretty much covered most of the attractions around Cusco & the Sacred Valley. For the last day of our sightseeing, we ventured to the outskirts North of Cusco to visit 4 Inca ruins that was all included within Circuit 1 of the Partial Boletico Turistico. Instead of the Boleto General that covers 16 attractions and costs 130 soles/$47 per pax, we opted to buy only the partial ticket that covers 4 attractions around Cusco for 70 soles/$22 coz personally, I'm not that interested to see so many ruins. =P

After following a tour the day before, we were back to our backpacker's mode to explore the ruins ourselves and travel like the locals. Our plan was to take the collectivo to Tambomachay, then walk all the way down to Cusco visiting other ruins. The sequence of our sightseeing was Tambomachay - Pukapukara - Qenqo - Sacsayhuamán (from farthest to closest to the city).

Our hostel's host gave us directions to the bus stop where we could hop on a local bus to get to the ruins. The 15 minutes walk to the bus stop turned out to be quite an interesting one. Cusco's streets are so narrow they could barely fit a car, and we had such a small curb to walk on. We could feel the cars sweeping by our hands! And as if the streets are not narrow enough, we saw a Peruvian lady walking on the streets with 2 Alpacas following her obediently...lol! 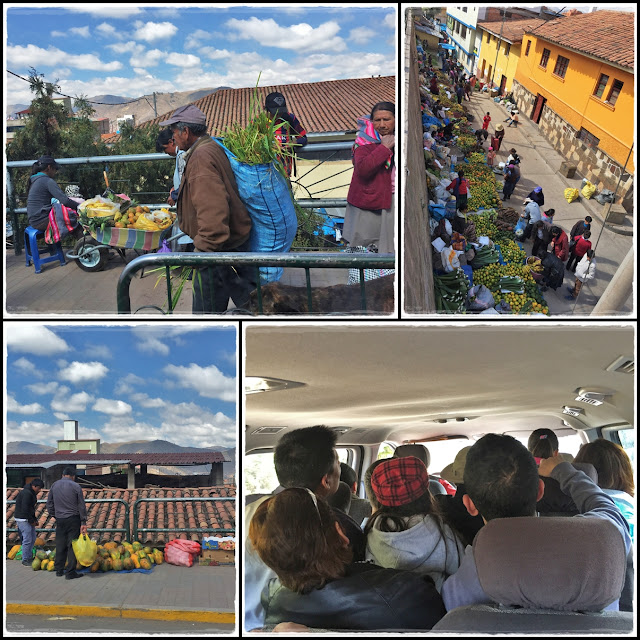 The bus stop was located in front of a local market, everyone seemed to be selling the exact same thing...haha!! While we were trying to look for the bus, a collectivo that was waiting to fill their seats approached us and said 'Tambomachay, Tambomachay'. We negotiated for 2soles/$0.50 per person and squeezed into the collectivo with other locals. As I mentioned before, it's so easy to hop on local transport here and it's so cheap!!

The journey to Tambomachay took only 20 minutes. According to Wiki, 'the function of the site is uncertain: it may have served as a military outpost guarding the approaches to Cusco, as a spa resort for the Incan political elite, or both.' I prefer the latter...haha!! 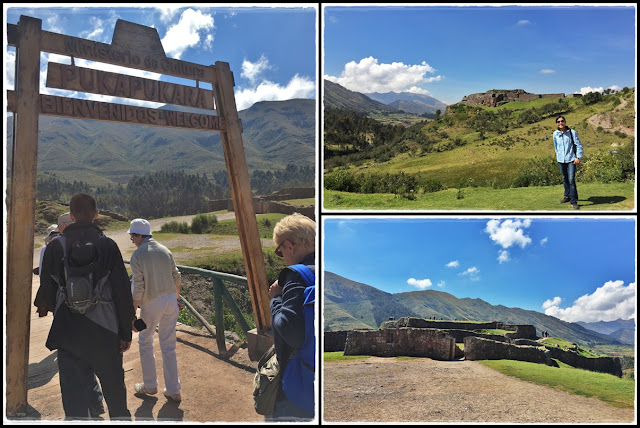 Just slightly down the road from Tambomachay was Pukapukara. This fort is made of large walls, terraces, and staircases and was part of defense of Cusco and the Inca Empire.

Pardon my shallowness but I was more attracted by the scenery than the ruins/stones. =P 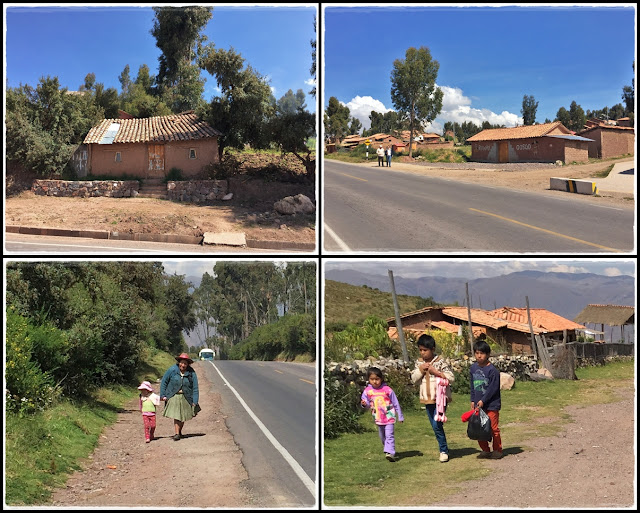 Passed by some local villages and locals as we walked to the next ruin. I think we were the only crazy tourists who were walking to all these ruins coz we didn't see any other tourists along the way...haha! 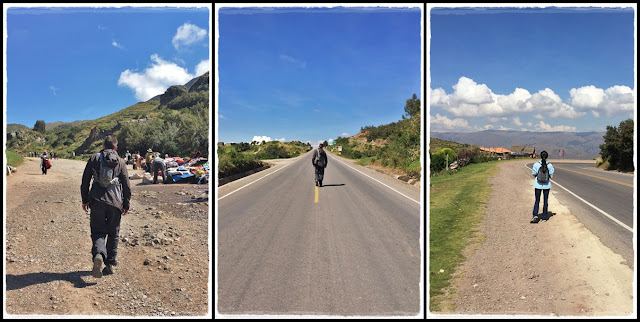 Walk, walk, walk...took us almost an hour to walk from Puka Pukara to Qenco. Just the two of us, walking hand in hand, enjoying the scenery, chatting about things I don't rmb now...so romantic right? Hahaha!!

Random scenery in the middle of don't know where....

Finally made it to Qenco after a long walk. Honestly, I have no idea what this ruin was for...all I see was huge stones. :P 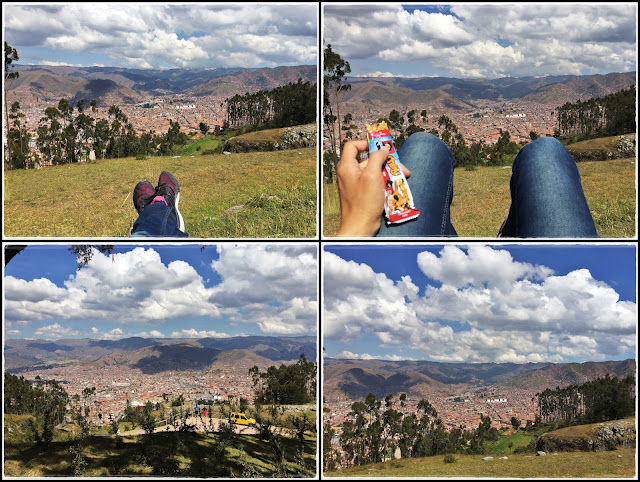 Once again, I chose to enjoy the scenery instead of the ruins. =P Took a break and had some snacks while enjoying the view of Cusco...quite a cool location for a picnic right? =P 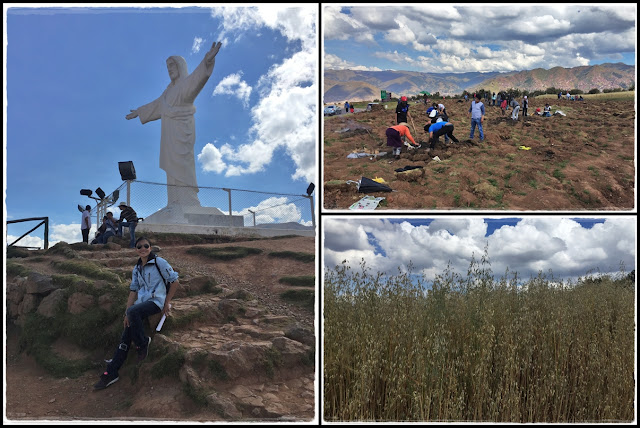 Walked for another 20 minutes and arrived at our last attraction for this trip - Sacsayhuaman (pronounced as Sexy Woman). =P The people in the top right photo were actually having picnic there, baking potatoes in the ground...what a random place to be picnicking...lol!! 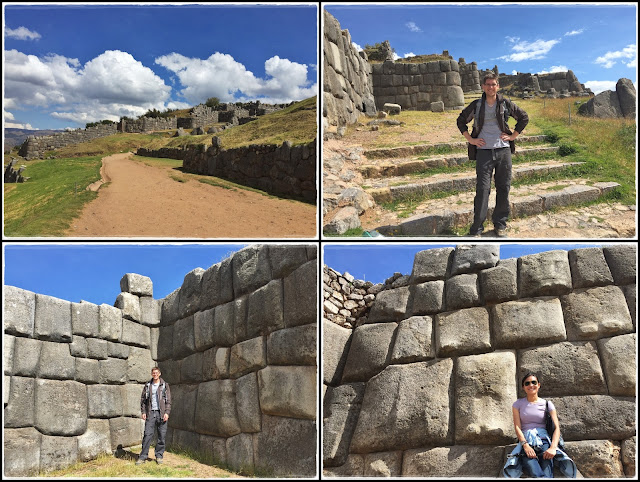 Because of its location high above Cusco and its immense terrace walls, this area is frequently referred to as a fortress. The Incan stonework is also evidenced here, the huge boulders fit together tightly without mortar, pretty impressive!

We spent only approximately 3.5 hours covering all 4 ruins and by 1.15pm, we've had enough of the ruins so we decided to call it a day and started walking back to the city. 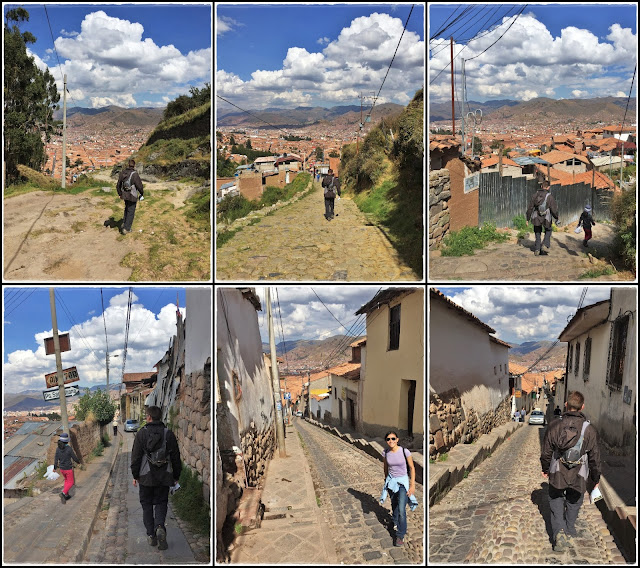 Walk, walk, walk again...but this was an easy walk coz it only took us 15 minutes from Sexywoman back to our hostel.

Some interesting things we saw along the walk. We were wondering how the cars go downhill coz the streets are so narrow it would be difficult to do a 3-point-turn. Our question was answered when we saw a cab reversing all the way downhill...lol! Just as I thought public pay phones are on the verge of being extinct, we saw a lady using a pay phone by the street...awesome! =) 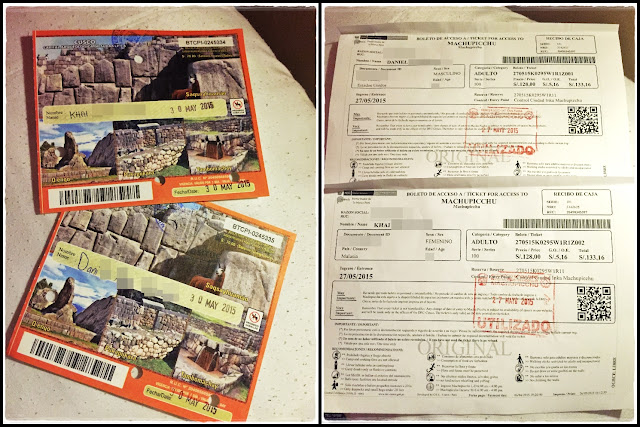 Left: Partial boleto ticket ; Right: Machu Picchu tickets. Both with our names on it and we had to show our passports at all entrances.

Finally, it's time to say goodbye to Peru and begin our loooong journey back.

Checked-out of our hostel at 6am and took a cab to the airport. It was Sunday morning so the streets were very quiet. 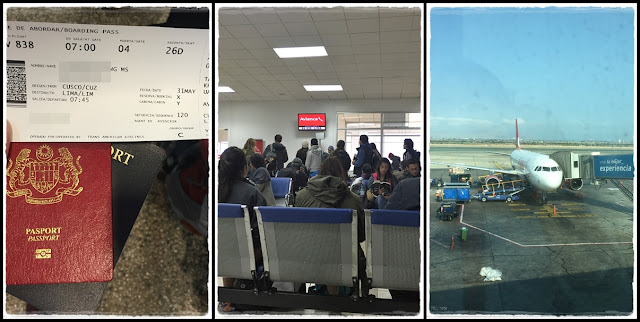 7.45am flight from Cusco to Lima on Avianca.

4 hours transit at Lima airport. Hubby was excited about the McD waitress service in the airport. 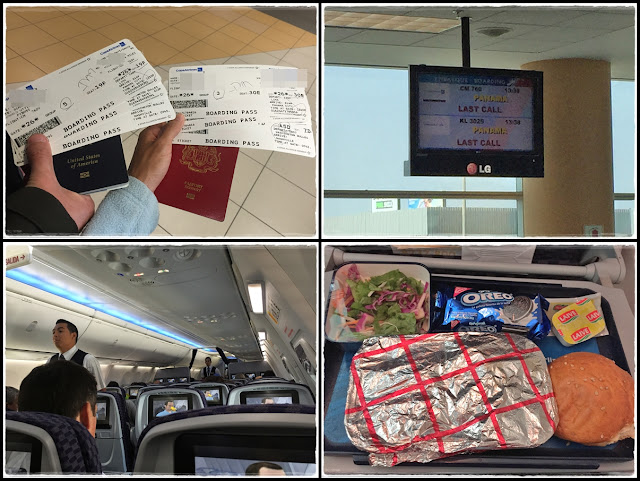 1.40pm flight from Lima to Panama on Copa Airlines. Copa is a flag carrier for Panama so that explains our transit in Panama. 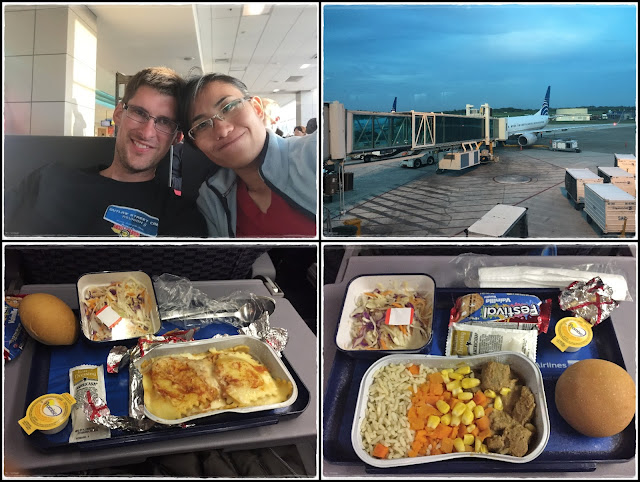 7.00pm flight from Panama to Washington DC and spent the night at DC airport before catching our final flight to Nashville the next morning.

So that's a wrap for our week-long Peru trip! Thanks Peru for the amazing Incan ruins, breathtaking sceneries, friendly people, beautiful weather, and never-ending hikes!! It's been a great adventure indeed!!
Powered by