Even though we visited 4 countries during this 10-days trip, half of our time was spent in Austria hopping through 4 cities/towns from West to East. After Innsbruck, our 2nd stop in Austria was the city of Salzburg...more famously known as the birthplace of Mozart and the home for "The Sound of Music". I just found out that this movie was actually filmed in the 60s and I remember watching this movie when I was younger (not that I'm that old now), but surprisingly hubby never watched this movie. I'm just amazed that after 50 years, this is still one of the main attractions here in Salzburg and they even have the 'Sound of Music' tours running every day. I guess it's either because the movie is really successful, or there aren't many attractions in Salzburg, or the filming locations haven't been developed much and therefore still keeping their original beauty after 50 years. Well I'll never know the answer coz I'm not that big of a fan to go on the S.o.M tour. =P 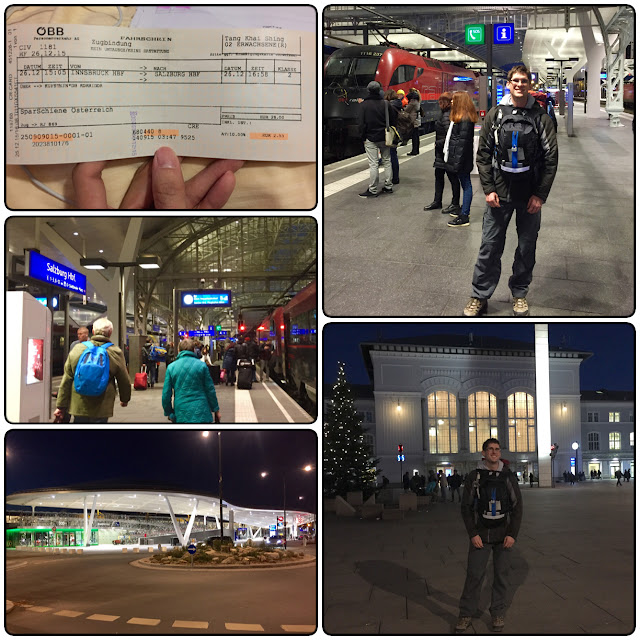 Made it to Salzburg Hbf (central train station) after the 2-hr train.ride. 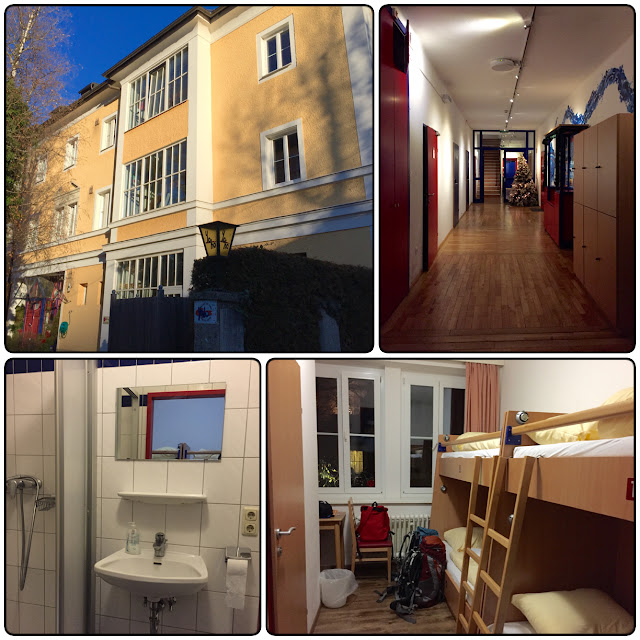 Our accommodation for 3 nights in Salzburg...YOHO International Youth Hostel. We stayed in the 4-bed mixed dorm ensuite for a total of €145 ($155) for 3 nights. The location was less than 10 min walk from the train station, which turned out to be very convenient coz apparently almost all the supermarkets/restaurants were closed for Christmas weekend, apart from the one in the train station. Seriously, this should be the best time to make money lo...oh well Europeans.

Anyway, the first 2 nights in this hostel was all good until the last night when we came back to a messy room and saw that the clothes that we put on the bed (to let other roommates know that the bed was taken) were all over the floor and my toiletries bag that I left on the desk missing. =.= Lesson learnt, we should have just locked every damn thing in the locker provided in the room. Who would have known someone (pretty sure it was the cleaner) would be interested to steal my toiletries bag, my new Uniqlo hoodie, and hubby's Columbia pants...and didn't take the other non-branded clothes...wth! Worse still, we were only half way through the trip so I had to survive with limited toiletries/make-up stuffs for the rest of the trip. Fortunately, we didn't lose any valuables and our next accommodation was a hotel so we were able to replenish some toiletries.

R.I.P. my favorite toiletry bag that I bought in Phuket in 2008 to replace the previous one, which I lost when my backpack was stolen in Pudu. It has been traveling around the world with me for the past 8 years, through 4 continents, through Amazing Race. It's not the monetary value, it's the sentimental value that I'm upset about. =( 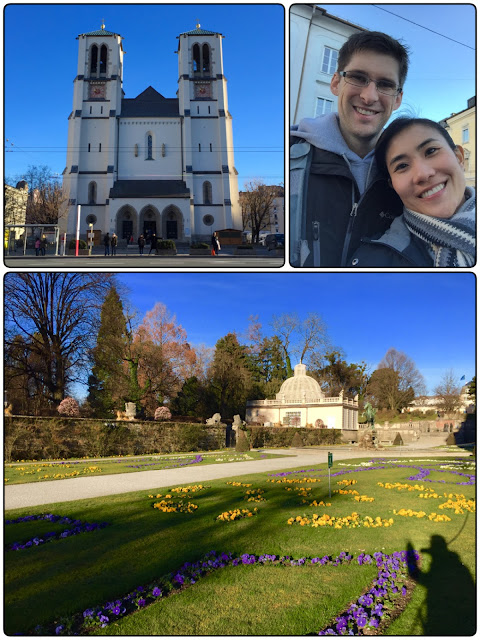 Aight enough of venting, time to start writing about Salzburg. =P Our first stop was Mirabell Palace & Garden. Not much to see in the garden during winter but it's along our route so we stopped for some photos. 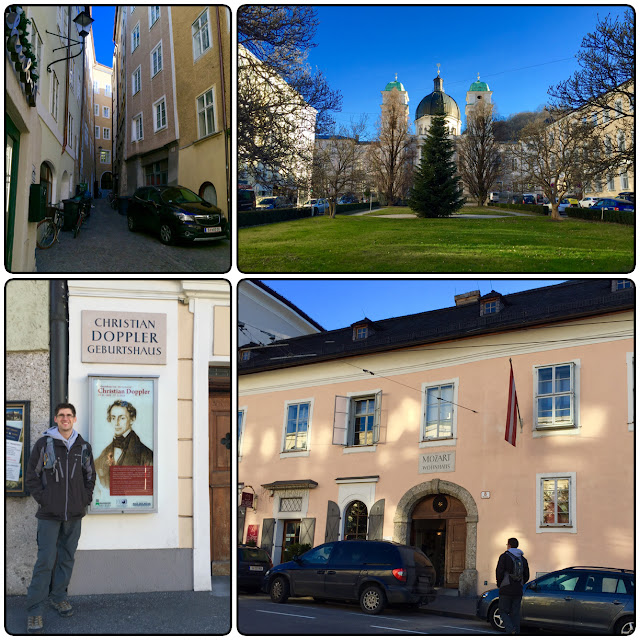 Walked by Mozart's Residence, Church of the Holy Trinity, and some small alleys. 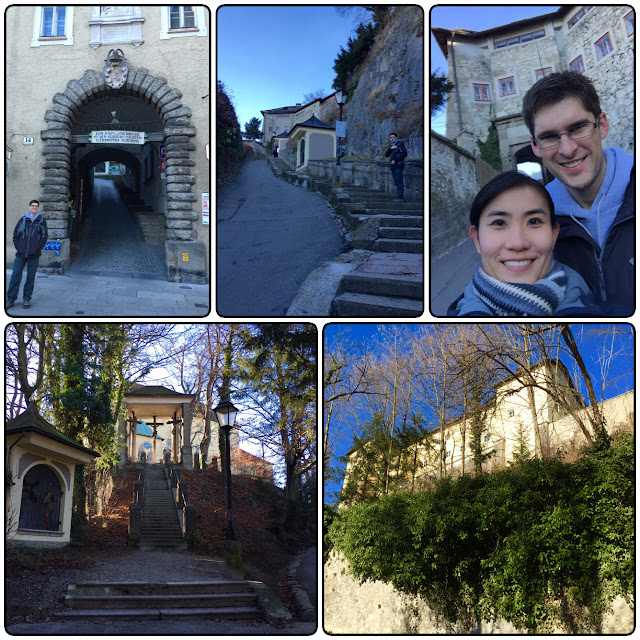 First hike of the day to Kapuzinerberg Monastery. Our main reason of hiking up wasn't really to visit this monastery... 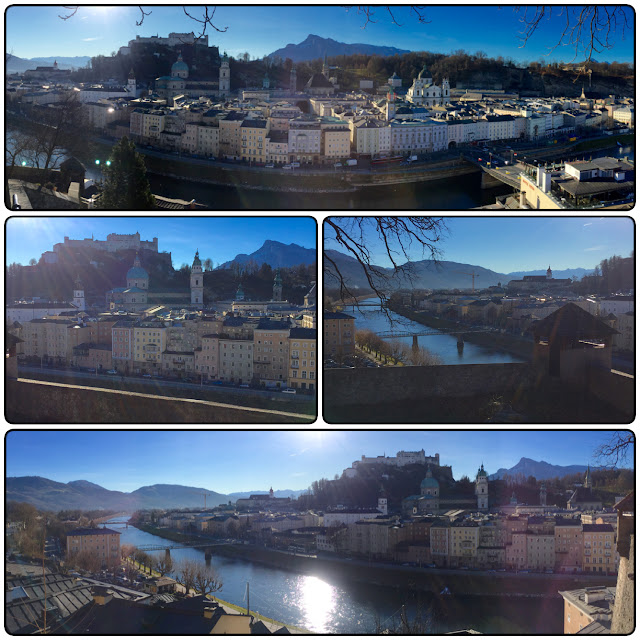 ...it was for this amazing view of the Old Town and Salzburg Fortress. 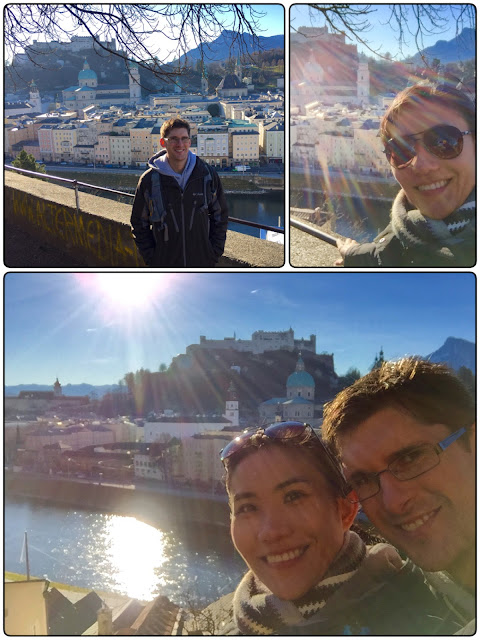 Selfies with the beautiful scenery and the morning sun ray. 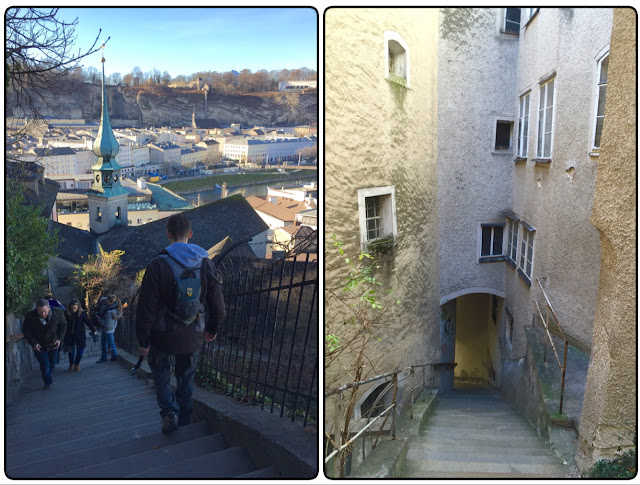 After taking countless photos of the scenery, we hiked down the hill via the Imbergstiege 'stairs' to cross the river to the other side. 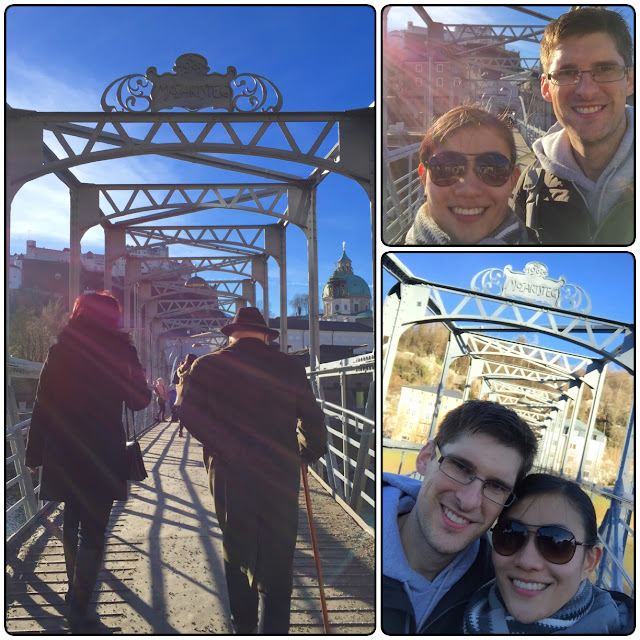 Walked across Salzach river via Mozartsteg...the pedestrian only bridge featured in scenes in the Sound of Music. This was the only S.o.M. attraction that we visited in Salzburg. =P 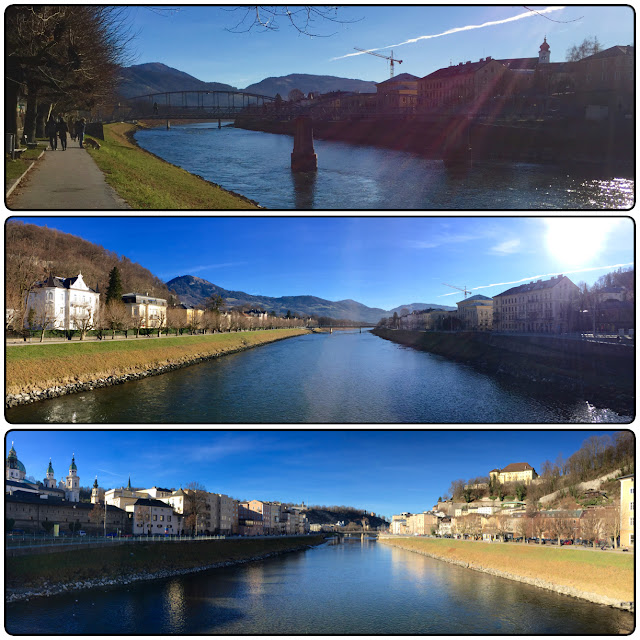 View of the river from Mozartsteg...what a beautiful day. =) 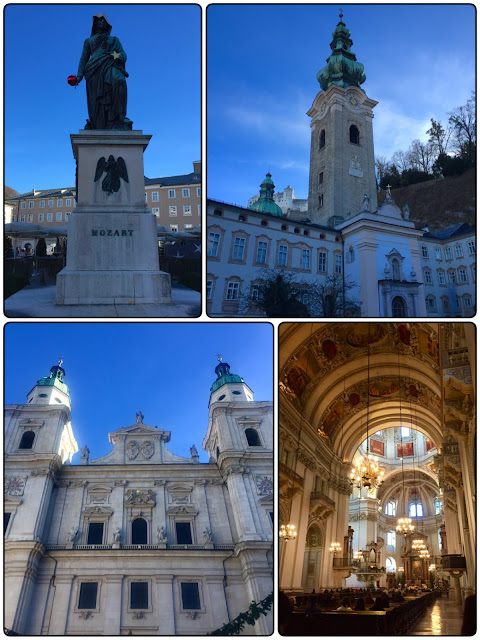 After a short walk across the river, we were in the Old Town district. Good thing about all these old towns, everything is close to each other. Being Mozart's birthplace, it's not surprising that a lot of attractions in Salzburg are Mozart-related. The main square of the old town is called Mozartplatz, with Amadeus Mozart's statue dominating the center of the square. Next to the main square was Salzburg Cathedral/Dom, since it was free to enter, we decided to go in for our A.B.C. visit. Conclusion...churches in Europe are all big and grand. =P 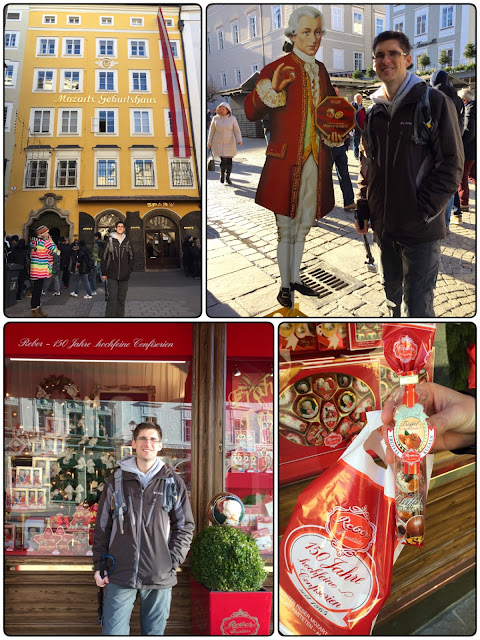 As I mentioned earlier, it's all about MOZART here. And of course, gotta try the Mozartkugel (a.k.a Mozart Balls) since we're here. "The pistachio, marzipan and nougat core is coated in milk chocolate and until today handmade in the Konditorei Fürst." The yellow building is Mozart's birthplace, we didn't go in for a visit though. 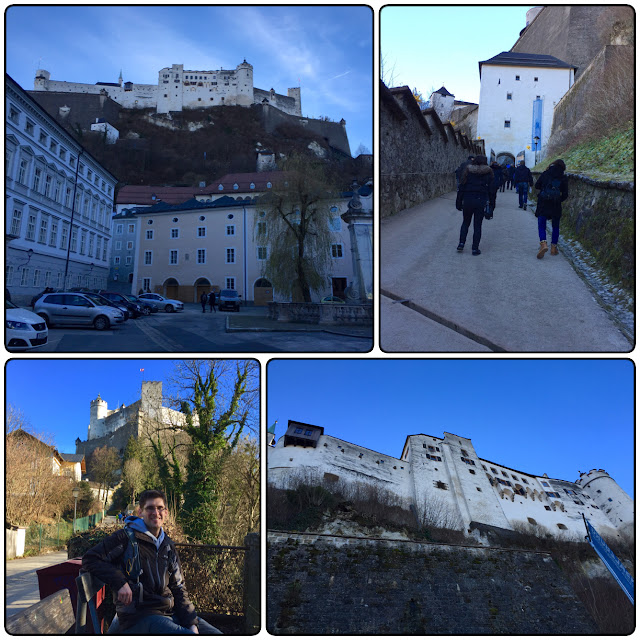 Our next stop was to hike up Salzburg Fortress (Festung Hohensalzburg). It looked pretty high from the bottom but it wasn't really a tough hike at all. There's a funicular that brings visitor up but we opted for the free option. =P The entrance fee for the fortress was €8 but we didn't enter coz I've seen photos of what's inside, nothing caught my interest. =P 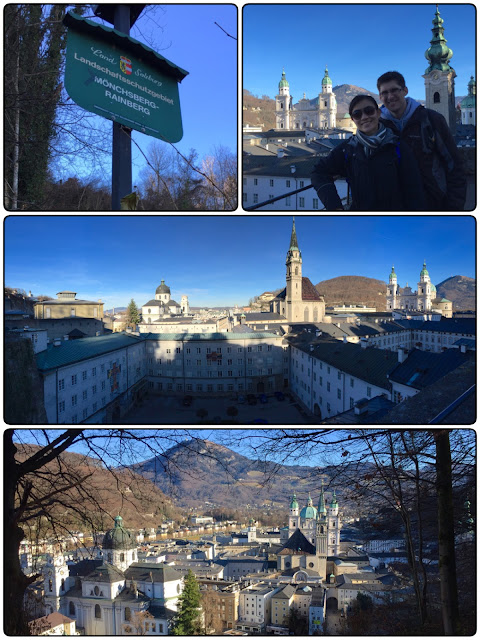 After a quick detour to the fortress, we continued hiking along Monchsberg Hill... 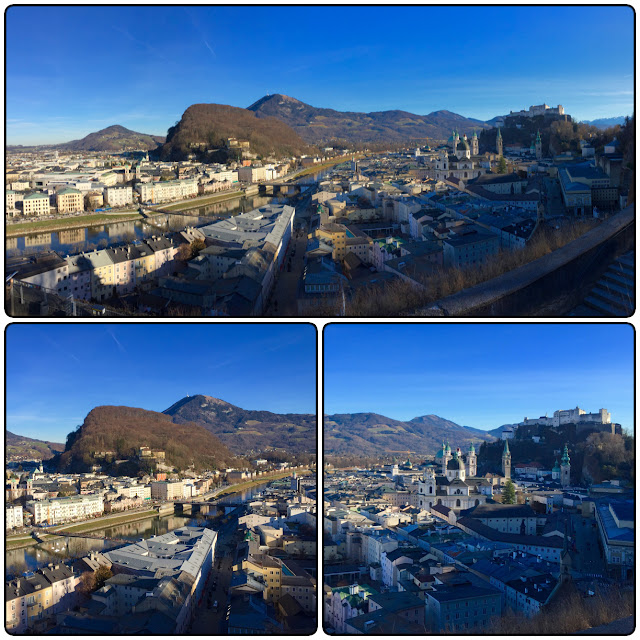 ...to Mönchsbergaufzug Viewpoint, which was right next to M32 restaurant. This viewpoint is F.o.C. and from here, you have a magnificent view over the roofs of Salzburg and the fortress. Spot the hill on the left of the river with buildings by the hill? That's the Kapuzinerberg Monastery where we were in the morning...we've walked all the way to the other side of town...haha!! 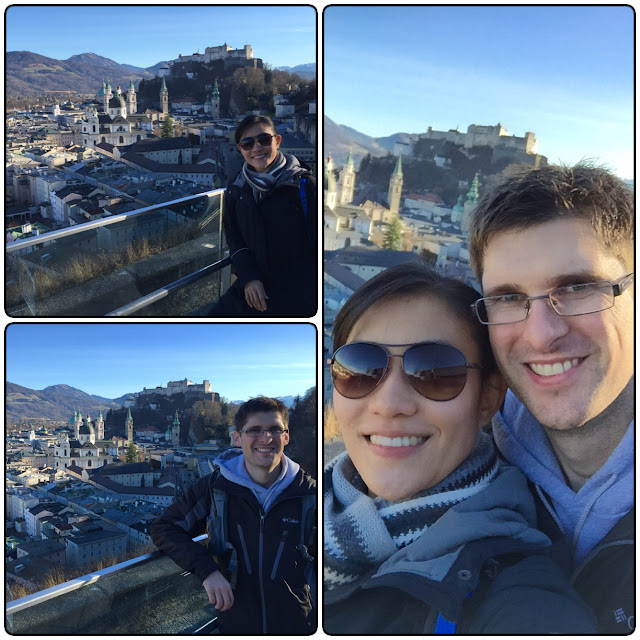 Hiked from one hill to another...now we've seen the bird's eye views of the city from both sides. =) 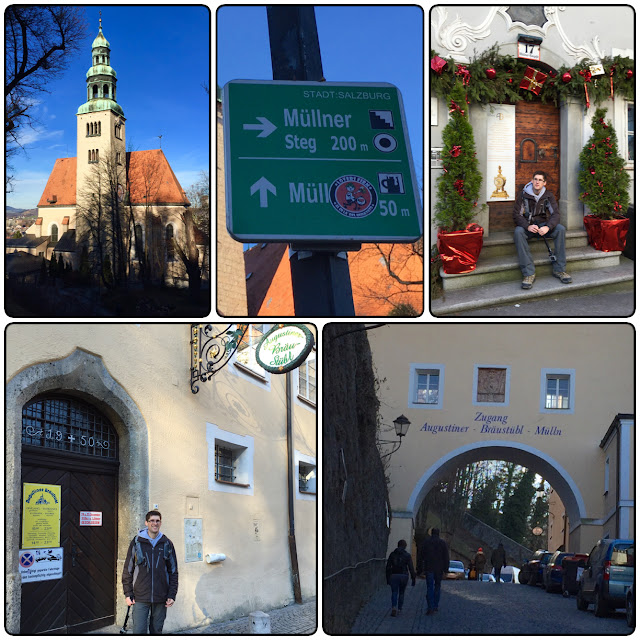 At the foot of Monchsberg Hill was Augustiner Abbey & Mullner Brau Brewery (spot the beer on the signboard). It was only about 1pm by the time we got here but the brewery didn't open until 2.30pm. We were starving and thought of having lunch somewhere nearby but after walking around for half an hour, we only saw one restaurant that was open, but it was fully booked. =.= Com'on, this is a touristy city, I can't believe so many places were closed for the Christmas weekend. We ended up sitting by the stairways waiting for the brewery to open...sounds like we're such alcoholics sitting in front of the brewery waiting for it to open...lol!! 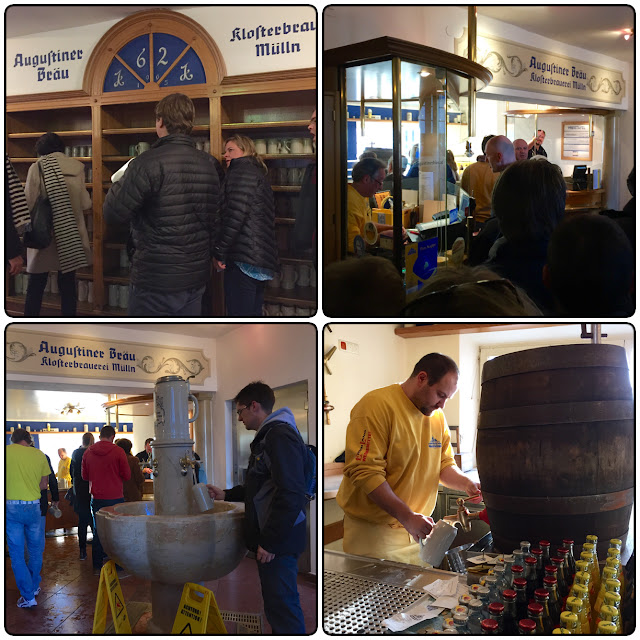 Finally...it's 2.30pm!! Apparently, we weren't the only ones waiting for the brewery to open. The whole place was flooded with tourists as soon as the doors opened. Glad we did our homework online prior to the visit, else we would have been so lost trying to buy a beer...lol!! Here are the steps and photo illustrations above. :P
1. Get a stein mug of the size you want (we picked the 1L mug).
2. Go to the cashier and order a token (show your mug and they'll tell you how much).
3. Go to one of the wells and rinse your mug (just for fun).
4. Queue for the beer that will be taken from the barrel for you. 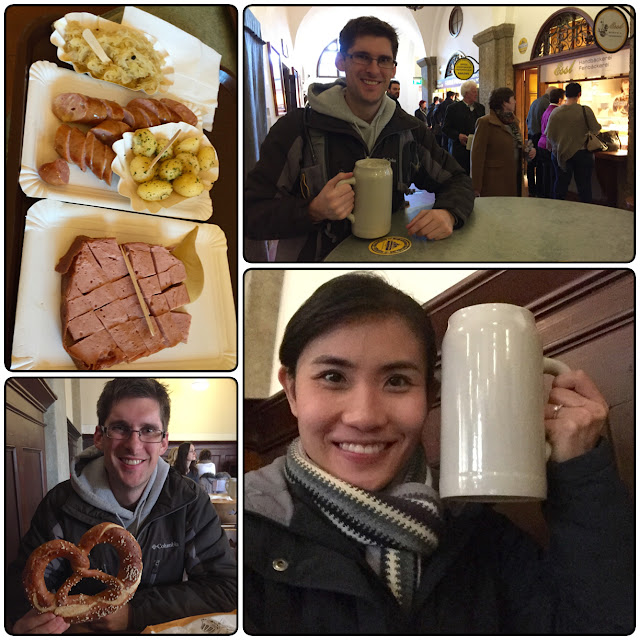 We read that despite this place being the best beer hall in Salzburg, the food of the market stalls is expensive. But since no restaurants were open that day, the food stalls in the brewery was exactly what we were looking for. =P In fact, the food wasn't as expensive as we thought they'd be. The 1L beer was €6.20 ($7), and we paid €12.55 ($14) for the food. We really enjoyed the sausage, ham, potatoes, and sauerkraut...yumss!! 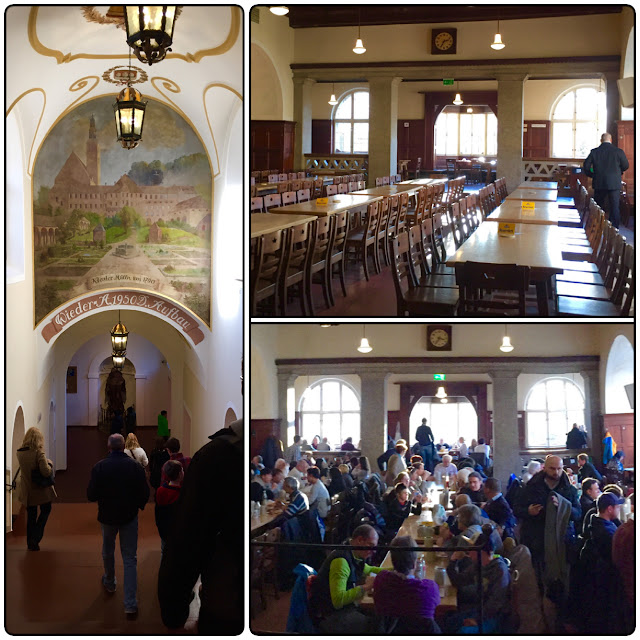 This is what the beer hall looks like from the inside. One interesting fact about this brewery was that it used to be a monastery and monks used to sell beers here. Monastery and brewery...what an irony right? =P 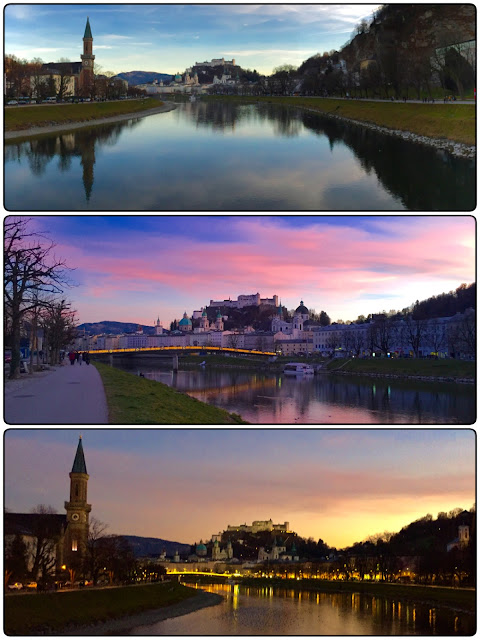 After a satisfying meal and drinks, we strolled back to the other side of the river and waited almost an hour in the cold for the sunset/night view of the Markartstag lovelock bridge with the fortress at background. What a beautiful sunset to end our day in Salzburg. =) 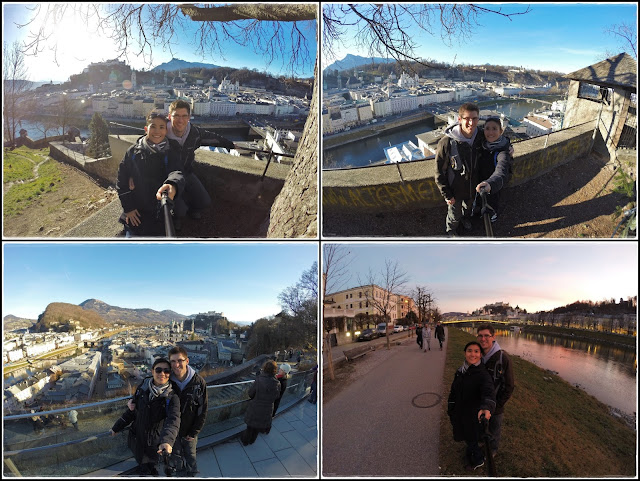 GoPro wefies! That's all for Salzburg. One full day was more than enough for us to complete a loop around the city and we've pretty much covered all the nice viewpoints in the city. =)

For those who are interested, here's the map (part 1;part 2) I made for our sightseeing routes.

Next up, we'll be crossing the border to visit the small German town of Berchtesgaden. P.S. Work has been pretty hectic lately, hopefully I'll have some time to update the next post soon!
Powered by