2,850 kms (1,770 miles), 8 days, and a camper van. We spent 8 days driving around Iceland, feasted our eyes with spectacular scenery at every turn, fed our soul with solitude, and indulged in so many unique experiences within such a short period of time. Iceland is definitely a unique country like no other.

After driving along the East Coast for 7 hours, we finally made it to our first stop in North Iceland around 2am. That means, time for a siesta before continuing with our sightseeing. Since we were ahead of our original schedule by a day, we decided to take our time and took a longer nap at the Dettifoss West parking lot. 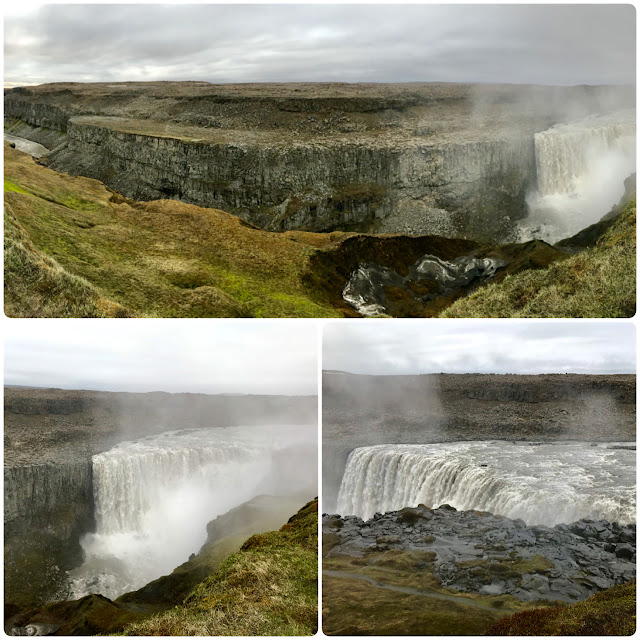 Woke everyone up at 4am to continue our sightseeing at Dettifoss, the most powerful waterfall in Europe. We could access the waterfall from the East or West side, and we chose the West side because the road conditions are better. I thought the waterfall wasn't too far away as I was able to see the mists from the parking lot, but I was definitely wrong. We still had to walk 15 minutes through a path surrounded by nothing but rocks before arriving at the waterfall. 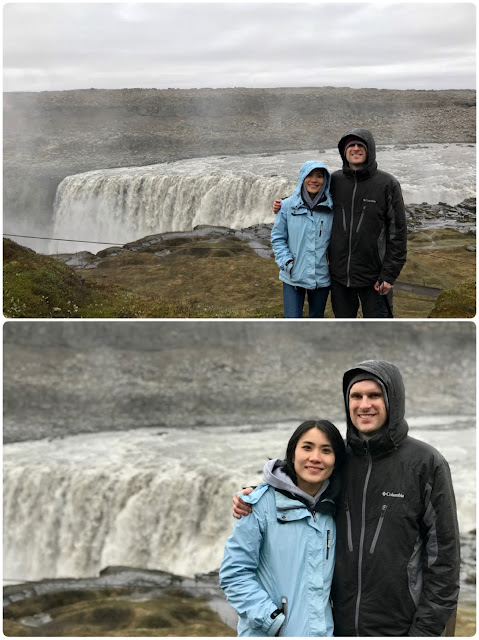 We could have probably gotten a better view of the waterfall if we hiked down the paths but it was wet, misty, cloudy and cold, so we didn't venture closer. Not adventurous I know. =P 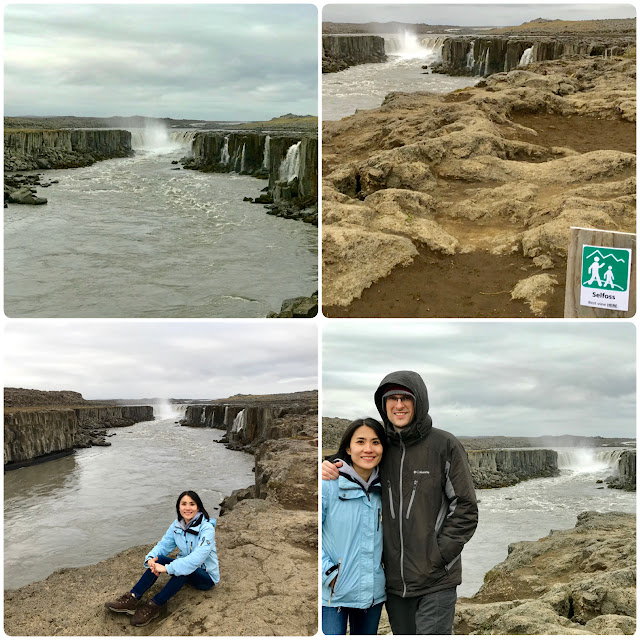 After getting sprayed with mist from Dettifoss, we walked another 10 minutes to Selfoss, another smaller waterfall in the same area. Pretty sure we could have gotten closer to the waterfall as well, but we decided to stop where the sign said "Best view HERE"...lol!! 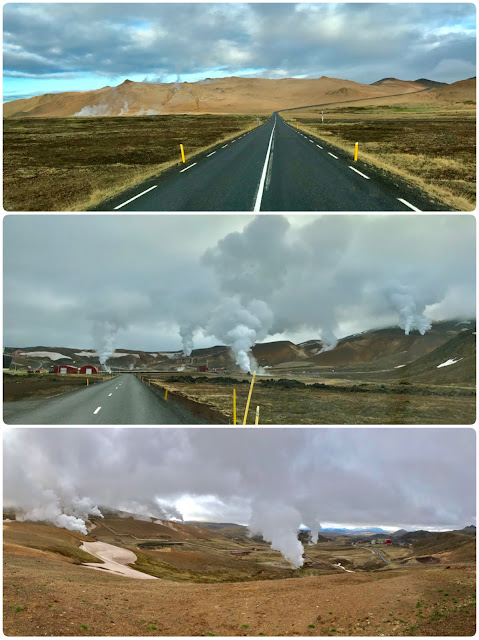 After driving for another 45 minutes, we entered the Krafla geothermal area and felt like we were entering Mars (as if I know how Mars looks like...lol!). The whole area was surrounded by earthy-colored landscapes with steam fuming from the ground. This place is smokin' hot!! =P 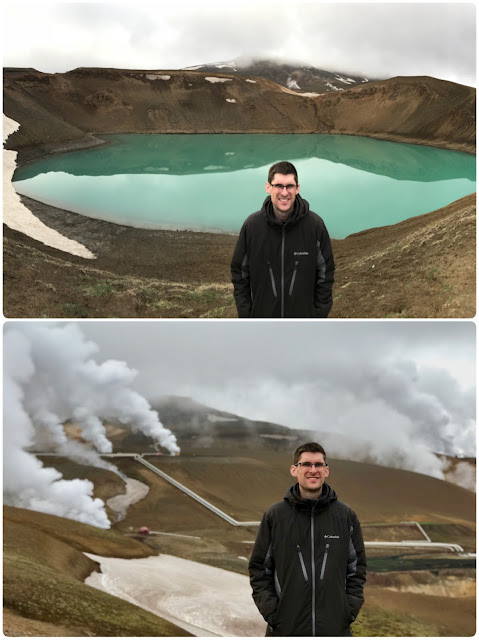 First stop in this area was Viti Crater. No hike required as the parking lot was right next to the crater. We were there at 6.30am and no surprise, we had the place to ourselves. =) The crater has a diameter of 300 meters and there is a short circular route around it but we didn't walk around it. 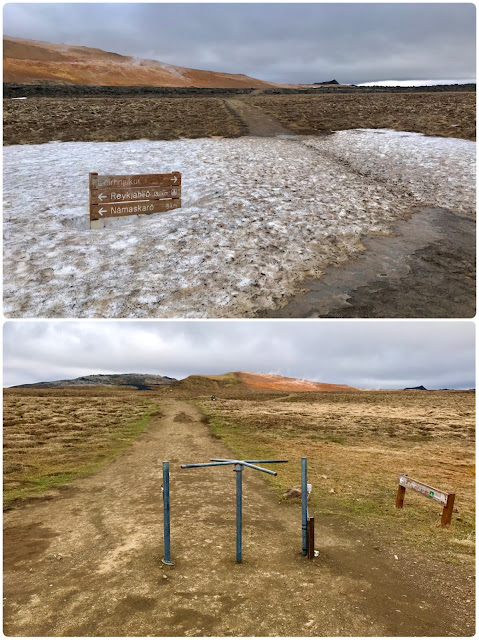 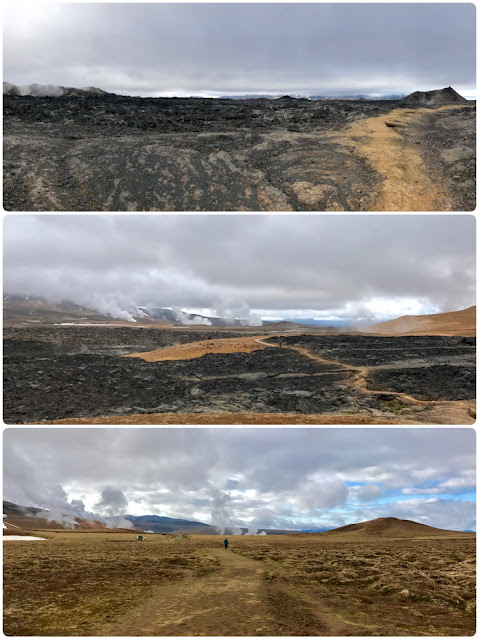 Next to Viti Crater was Leirhnjúkur Lava Field. The Leirhnjúkur area is a great plain which overflowed with lava during the 1984 eruption. After going through the turnstile (which was absolutely necessary), the first part of the walking trail brought us through some mossy area. Then we went through a section that was still covered in snow/ice, with the sign half buried in it, followed by an area covered in black lava. 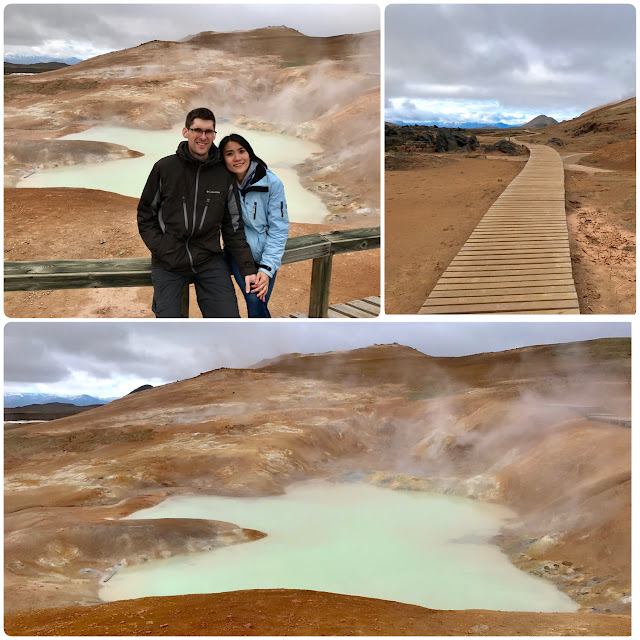 After the black lava area, the walking path continued via a wooden path that brought us to several mud pools like this. We wooden path seemed to continue further but we've already walked for 20 min to get here and the sceneries seem to look the same, so we decided to turn around and head back to our camper. 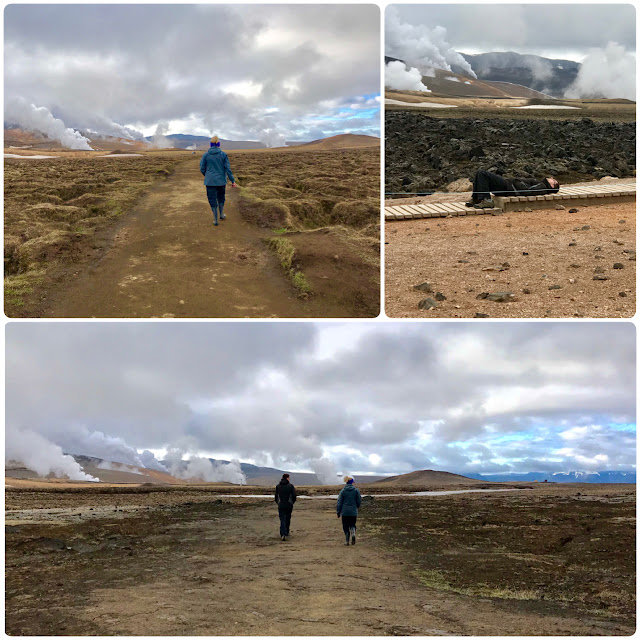 Another reason we didn't want to walk any further is because hubby was done for the day (top right pic). Btw, they looked like they were going on a mission in Mars...lol!! We were there at 7am and didn't see any other soul at all when we were there. =P 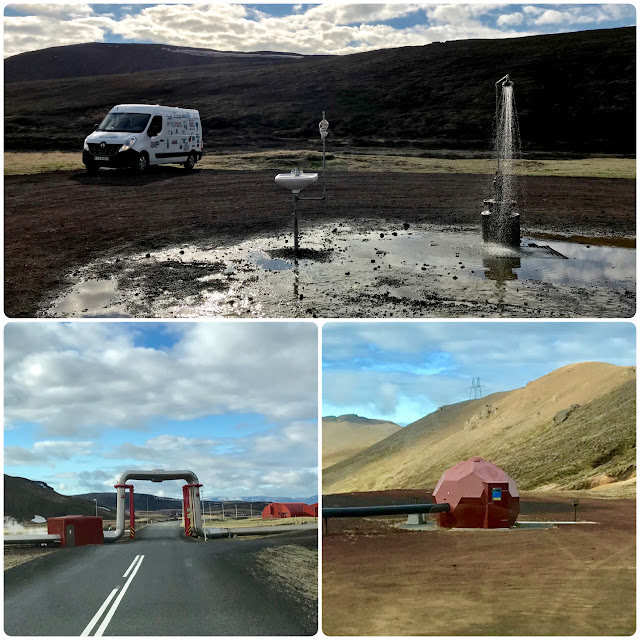 To get in and out of this area, we had to pass by the futuristic-looking Krafla geothermal power station, which has been operating since 1977. 25% of the Iceland's total electricity production is generated through geothermal power. Another sight that caught our eye was the perpetual heated shower by the road that doesn't turn off! Free hot shower anyone? 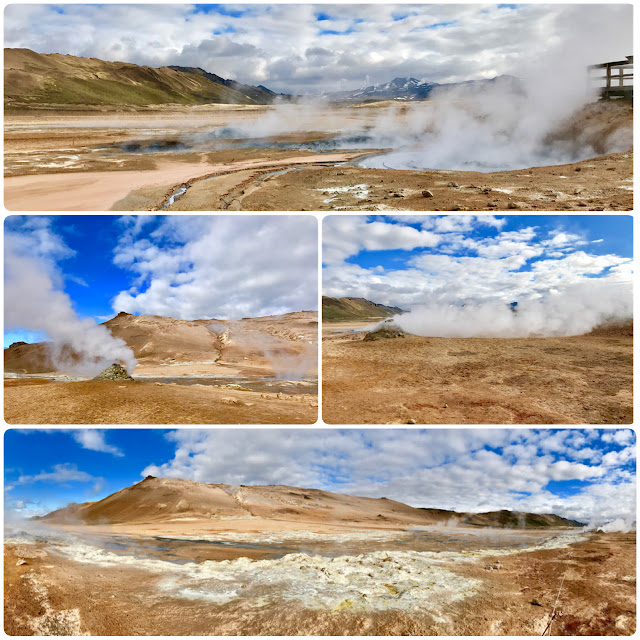 Our last stop of the day was the Hverir geothermal area. The whole area was filled with hot water springs, boiling mud, and steam coming out of the earth. Bubbling, boiling, and hissing all around! I read about the strong sulfur smell but honestly I didn't smell anything. 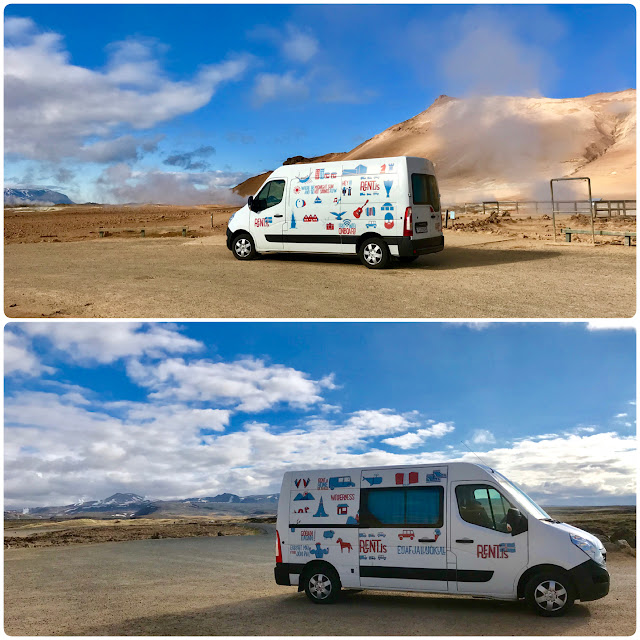 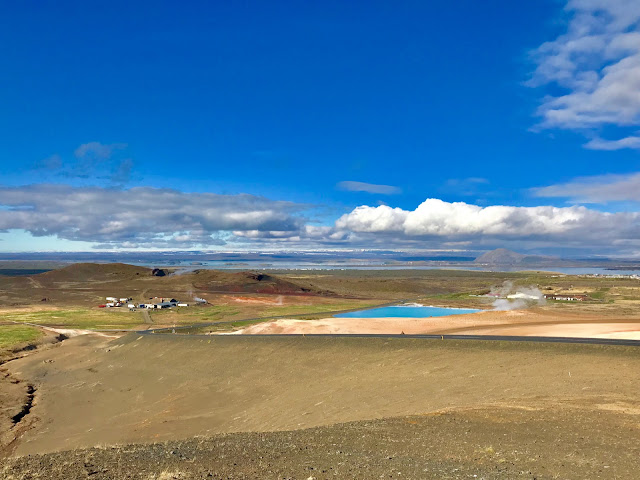 After a quick stop at the supermarket at 9am, we parked at this viewing area near Myvatn to rest for the 'day'. This was the first time we felt hot (and sweaty) sleeping in the camper van during this trip. Must be the geothermal activities around us heating us up! We also noticed that there were a lot of bugs in this area, and had to make sure we keep the camper van doors closed at all times. 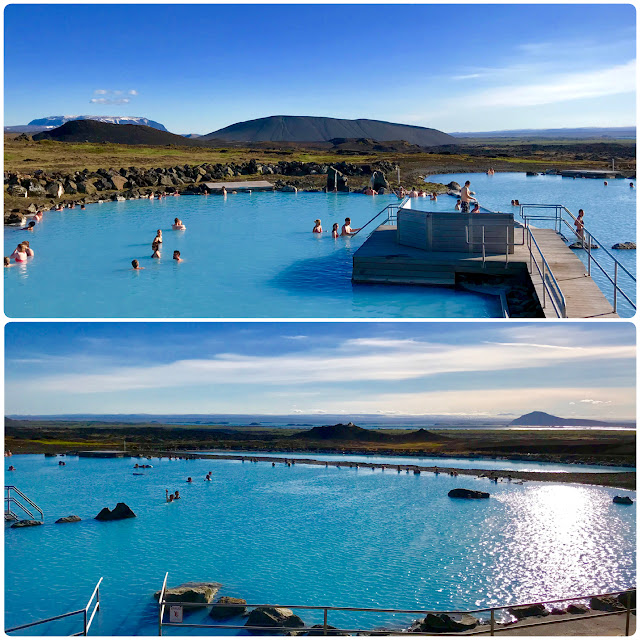 Woke up at 5pm and started our day with a relaxing and refreshing bath at the Mývatn Nature Bath. They were open from 9am-12am and the entrance fee was ISK4700/pax ($45), depending on season. 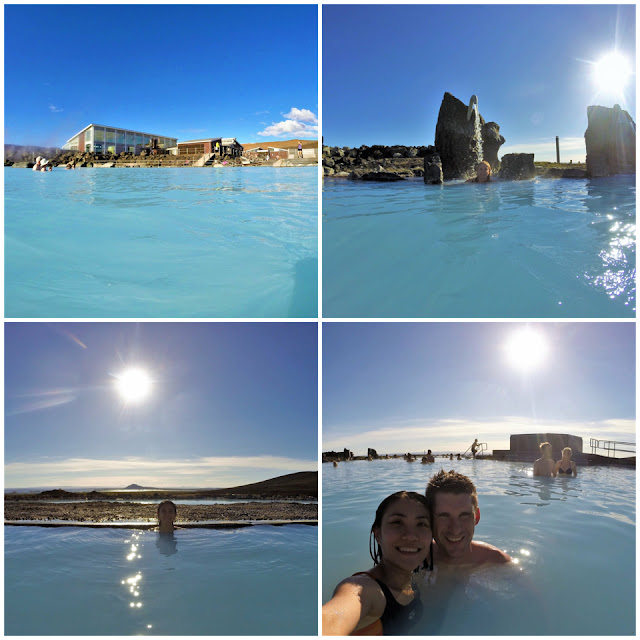 Even though this place is not as popular as the Blue Lagoon, it was still quite crowded when we got there at 5.30pm. Initially I thought about visiting later in the evening (less people) and enjoy the sunset view, but we decided to change our plans because we wanted to make it to Akureyri in time for late dinner.

We spent only about 30 min soaking in the blue warm waters, definitely didn't maximize the $45 bucks we spent but it's really more for the experience. Besides, it's still cheaper than Blue Lagoon. We also took the opportunity to take a good refreshing shower before leaving Myvatn area and start another long day/night of driving. 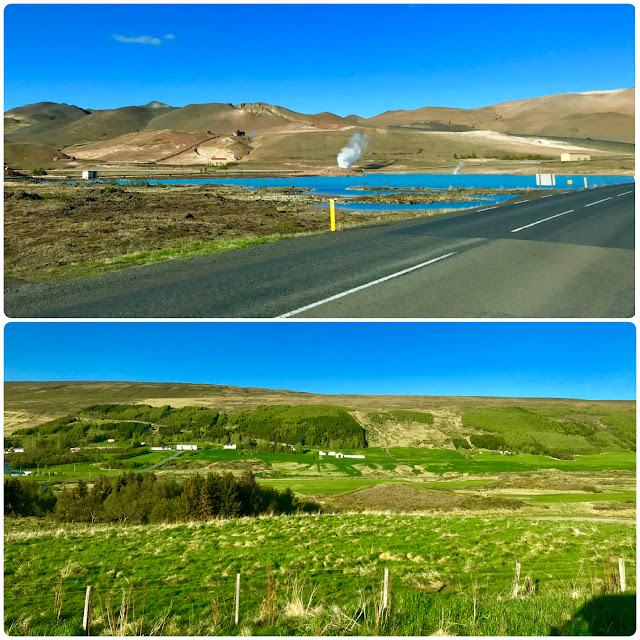 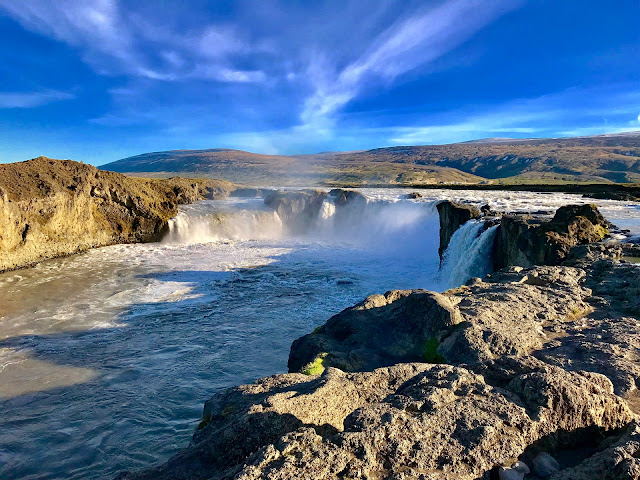 ...and arrived Goðafoss waterfall at 8pm. 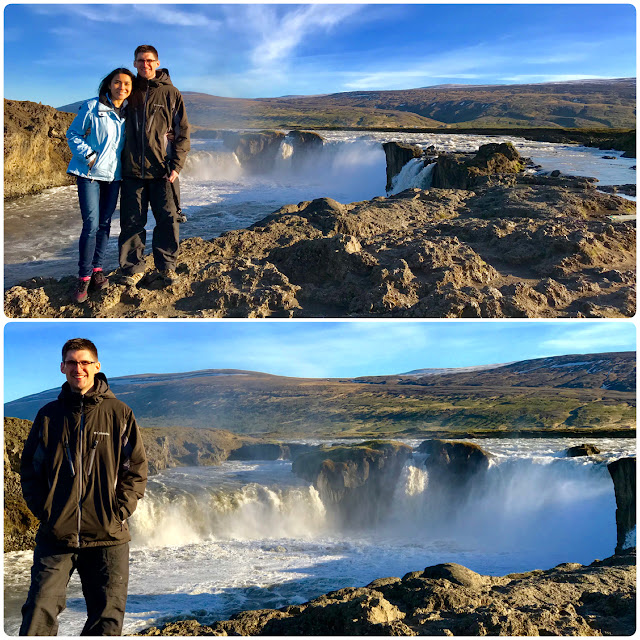 There are viewing platforms on both sides of the waterfall and we got lucky picking the right side, which was better for photos in the evening. This was probably our favorite waterfall, partially because it's literally 20 steps from the parking lot...haha!! 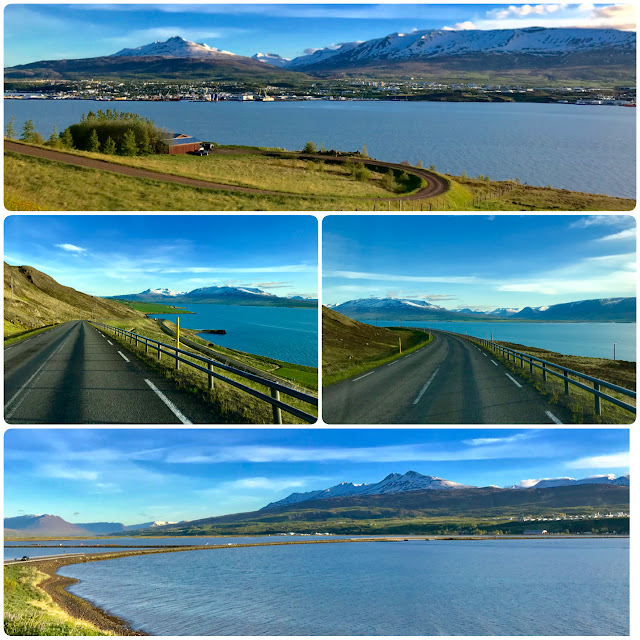 After a quick photo stop, we continued driving towards Akureyri, Iceland's second biggest town. The drive approaching Akureyri was a breathtaking one, with panoramic views of the city overlooking Eyjafjörður fjord and surrounded by snow-capped mountains. 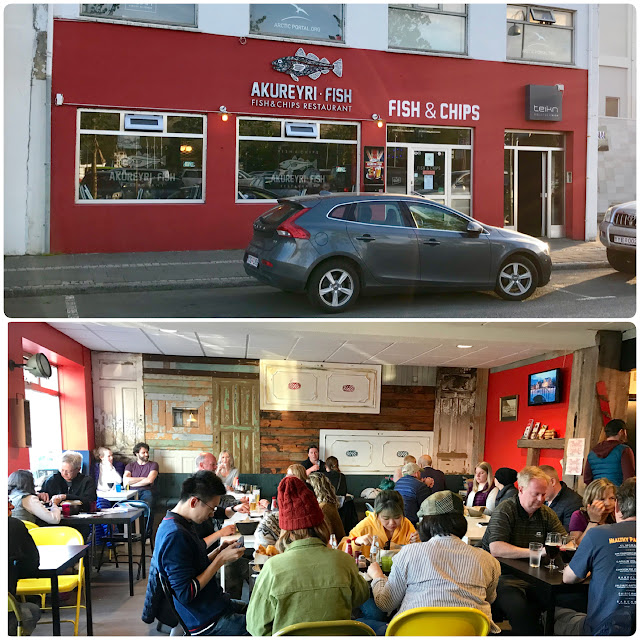 Apart from the hot dog we had in Reykjavik, we've been making our own meals over the last few days. We wanted to at least try some local seafood during this trip and figured Akureyri would be a good place to stop. We picked Akureyri Fish & Chips mainly because they had pretty good reviews and the price was very reasonable for Iceland's standard. 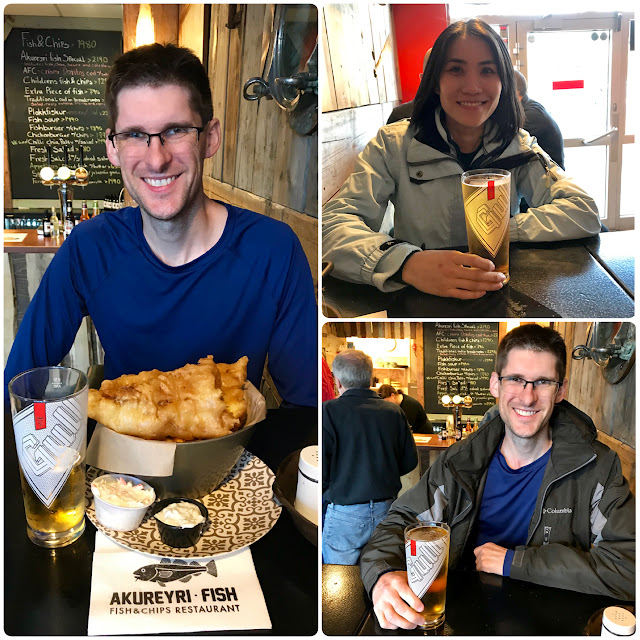 Hubby and I shared a Akureyri fish special (ISK2190) and an Icelandic beer (ISK1000). The portion was generous and was more than enough for the two of us. Total cost of this meal was $30.60 for the both of us, not bad at all in Iceland where a hamburger costs $20. 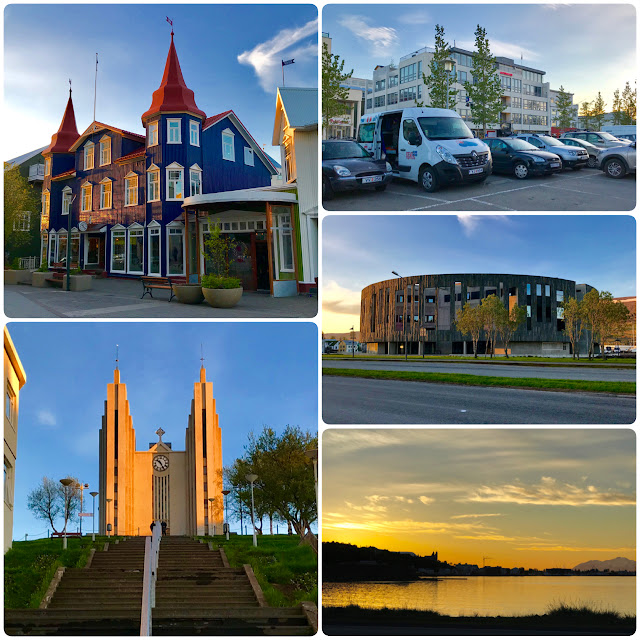 We went for a walk around Akureyri town after a satisfying 'lunch'. See how our big a** camper van fit in the small parking lot...lol! 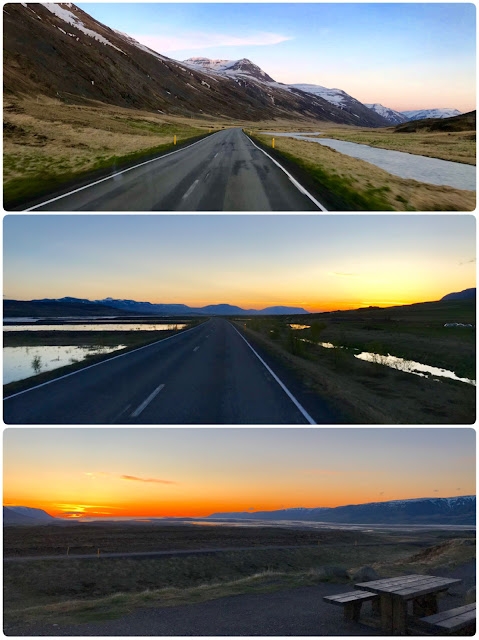 Our plan was to drive as far as we could to the Snæfellsnes Peninsula and call it a day before spending the next day exploring the region. As seen in the photos above taken at 12.30am, the sun never really sets during the summer. 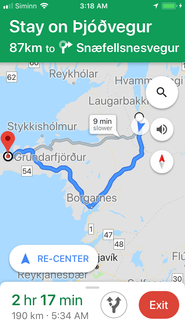 
That's all for North Iceland. Stay tuned for Snæfellsnes Peninsula (West Iceland) in the next post! As a token of appreciation for scrolling through this long post, here's our map to help you plan for your Iceland adventure! Click on the top right 'square' to open in Google Maps.