I've always been fascinated by the idea of traveling around the world, and I'm thankful to be able to fulfill a realistic version of this bucket list item for my 30th birthday. =) Our Round-the-World adventure brought us to 5 countries, 4 continents, covering 36,000 miles in 20 days. It was a great trip and I'll chronologically share about our adventures in the next few posts, so follow along! 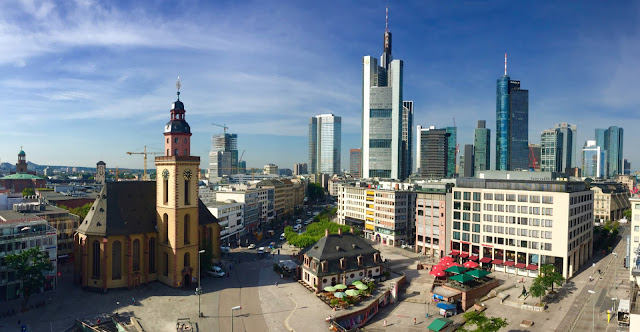 I've been to Frankfurt 3 times prior to this trip, but all my previous 'visits' were only within Frankfurt Airport - 1st was en route from KL to Stockholm, 2nd was en route from Oslo to KL, and the most recent one was en route from Prague to New York. Even though Frankfurt is known for being a major financial hub (not a touristy city), we still decided the make good use of our 12-hour layover to finally explore the city this time around. 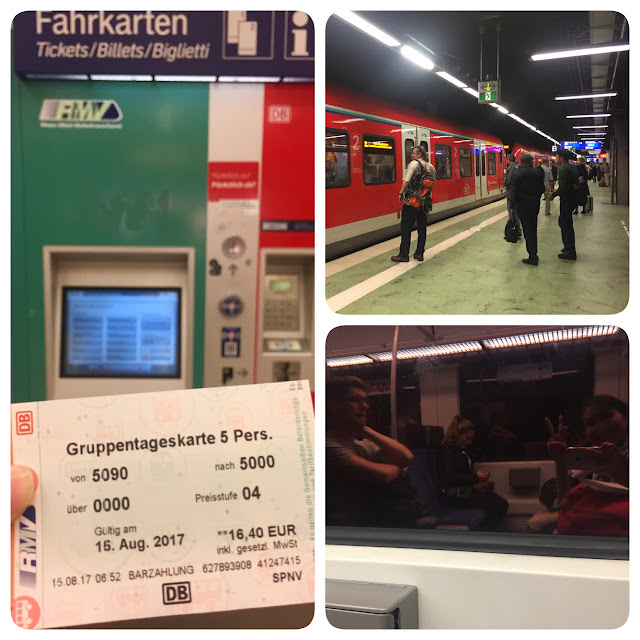 After 12-hours of not-so-pleasant flight with not much sleep (and several lavatory runs), we landed in Frankfurt airport dark and early at 5.40am. After freshening up, we walked to the train station under Terminal 1 by Arrival Hall B-1 (follow the Regional trains sign), and bought a group day ticket ("Gruppen karte") for €16.40 ($19) from the vending machine. The group day ticket is good for up to 5 people and is valid all day long, getting to and from the airport and on all forms of transportation in Frankfurt. This is the best choice for 2 or more people (because one-way ticket from airport to city costs €4.80 per person). After getting our ticket, we hopped on train S8 from the airport (in the direction of Hanau) to Taunusanlage station and the journey took only 15min. 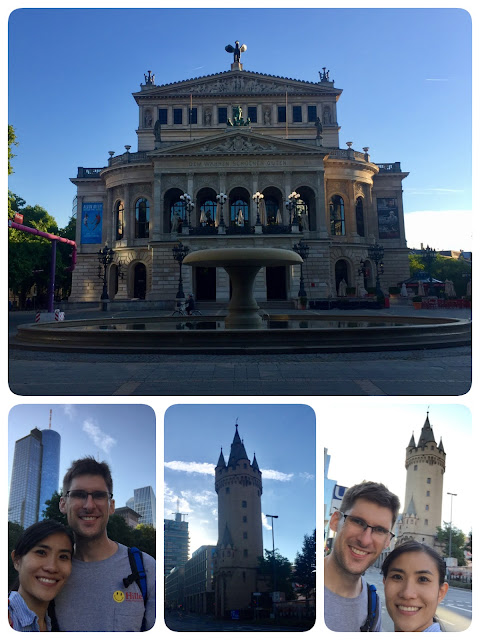 The first thing we saw coming out of the train station was the main tower (bottom left pic). Snapped a quick photo and continued walking to Alte Oper (Old Opera), then on to Eschenheimer Turm (bottom right pic), which used to be the city gate. 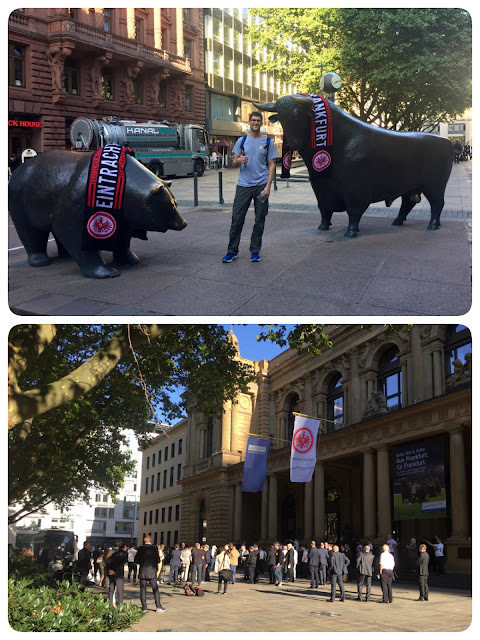 Next stop was the Deutsche Börse (stock exchange). We originally planned to visit the Visitor's Center, but were told they do not have English tour on that day. So we decided to just take photos of bear and bull statue outside of the building. There were some event going on that day but we didn't know what it was coz we couldn't read German. =P 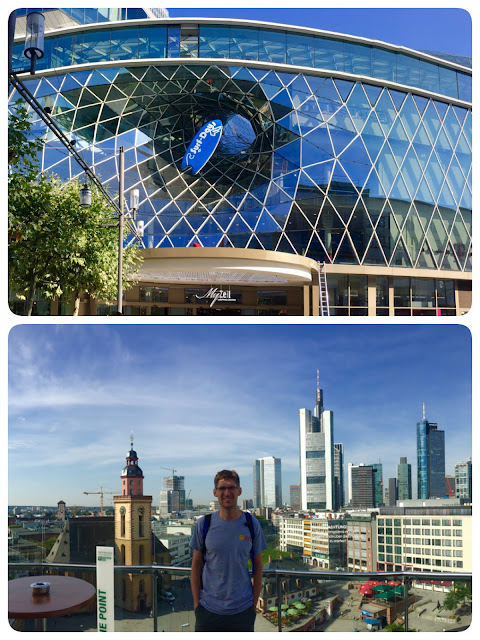 Next, we walked to MyZeil (the mall with a hole) and found a place to sit while we waited for Galeria Kaufhof Frankfurt An der Hauptwache (Zeil Galeria) to open at 9.30am. That's what happens when you start sightseeing at 7am. =.= At the top floor of Zeil Galerie is an outdoor viewing area, where you can enjoy theview of Frankfurt's Skyline, for free. Good thing about being early, we had the entire area for ourselves. =) From here, you can see the old and modern blending together in this city. 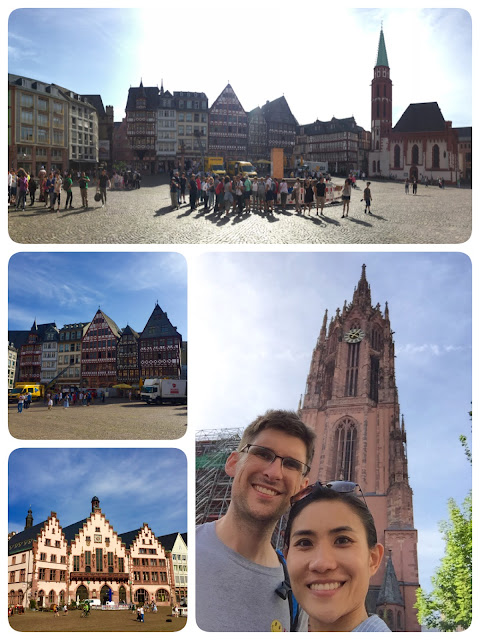 After seeing the city from above, it's time to see the old part of town from ground level. This historical market square is surrounded by historical buildings - Römerberg (reconstructed timber houses), Frankfurter Rathaus (Town Hall), Frankfurt Cathedral. 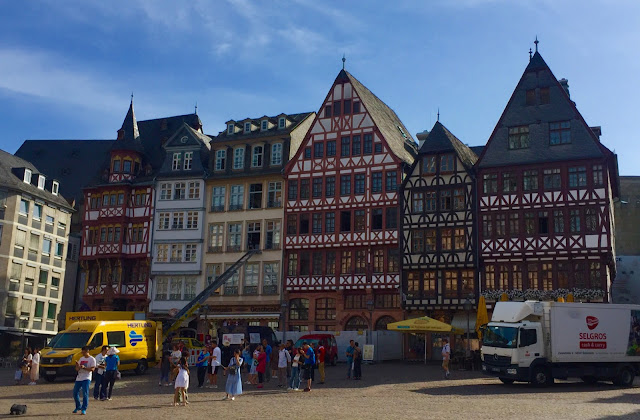 Römerberg...with some people and delivery trucks. 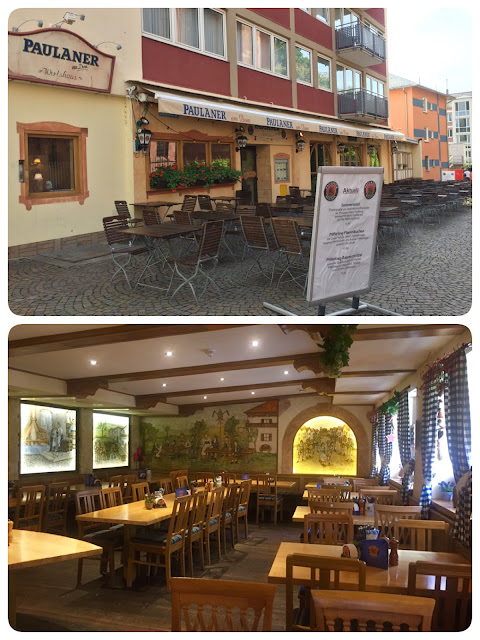 We were done with sightseeing by 10.15am, but the restaurant (Paulaner am Dom) wasn't opening till 11am. So we ended up sunbathing and taking a nap by the sidewalk. =P 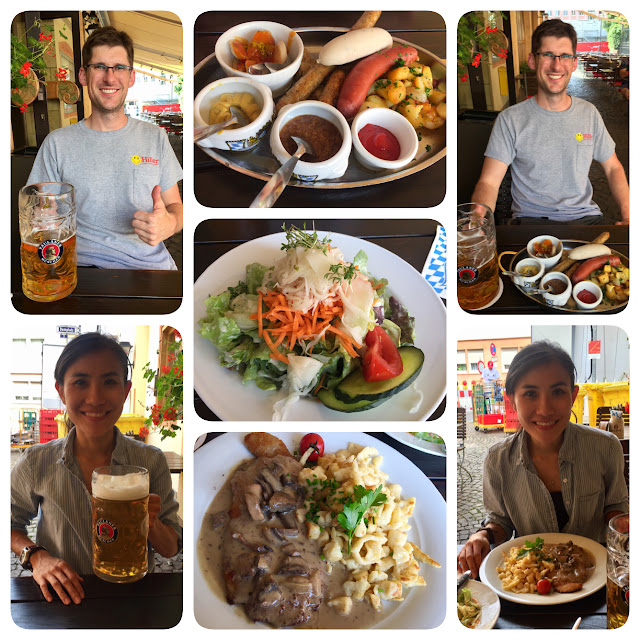 The main thing we were looking forward to for this layover was German food and beer, so this was the real 'highlight' for us...haha! I ordered the breaded pork escalope with mushroom cream sauce, buttered Swabian noodles and side salad, and hubby ordered the sausage platter with grilled sausage, beef sausage, Nürnberger sausages, white sausage and "currywurst" with home-made curry sauce, served with fried potatoes, sauerkraut, and a 1 litre beer (crazy)! Total cost of this meal was €48 ($56), a little pricey but it was a satisfying meal. =)

After filling our stomachs, we hopped on train S9 from Konstablerwache station (towards Wiesbaden Hbf) to Frankfurt Flughafen. We decided to make our way back to the airport earlier to enjoy the lounge for a few hours before boarding our next flight to Tokyo. 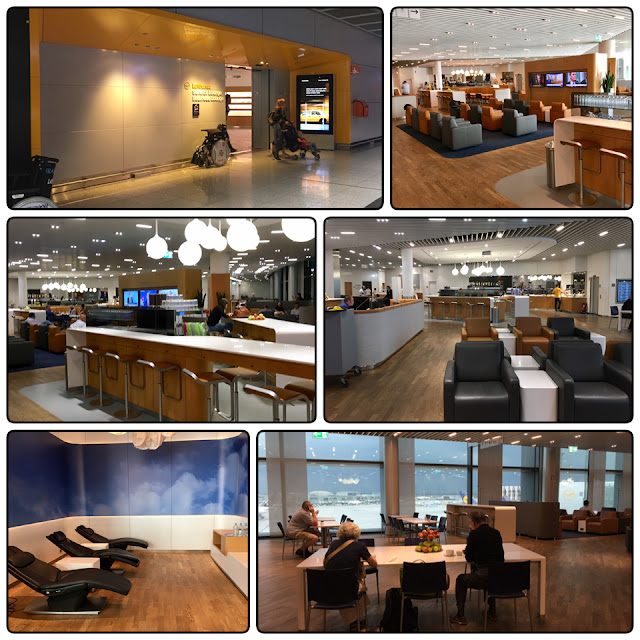 Our flight was departing from Gate Z, so it was convenient to visit the Lufthansa Business Lounge at Concourse Z. The lounge was quite spacious with lots of seating areas. 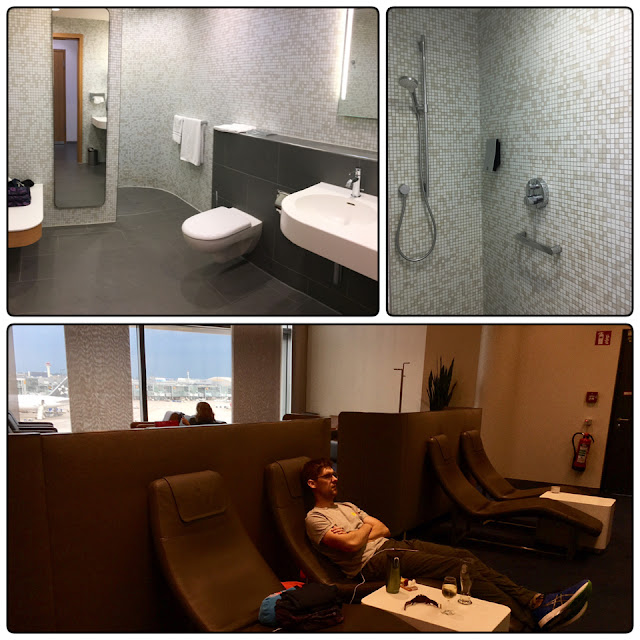 We found a quiet corner with lounge chairs, and hubby passed out almost instantly. 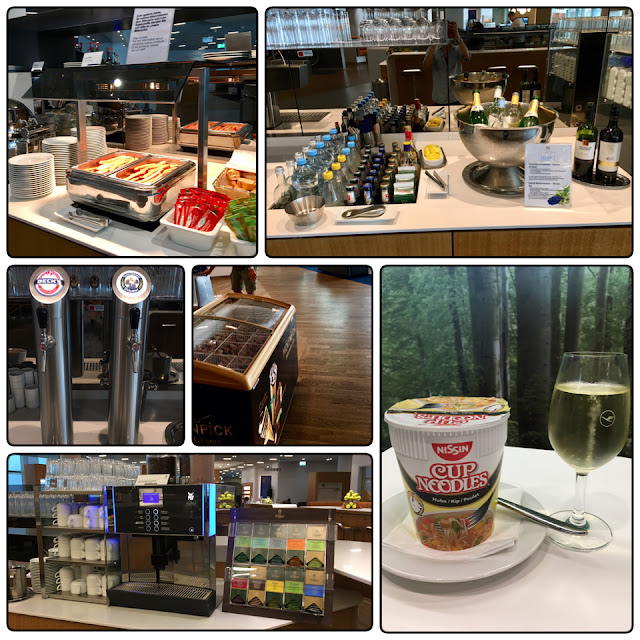 Having this lounge access was awesome...we had a good shower, enjoyed some beer, champagne, ice-cream, and I requested for an instant noodles. It was nice to get some rest before continuing our journey. 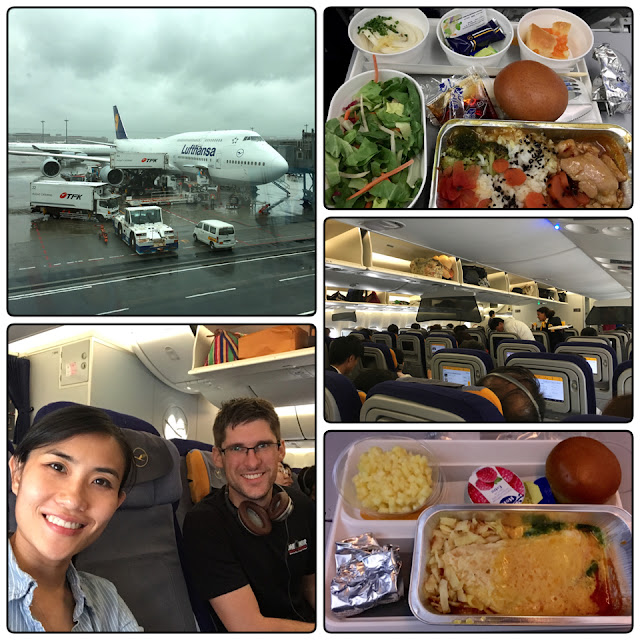 After spending an entire afternoon relaxing in the lounge, it was time to board our flight for Tokyo at 6pm. We were glad that the seat between us was empty...I pretty much slept through this 11-hour flight. =) 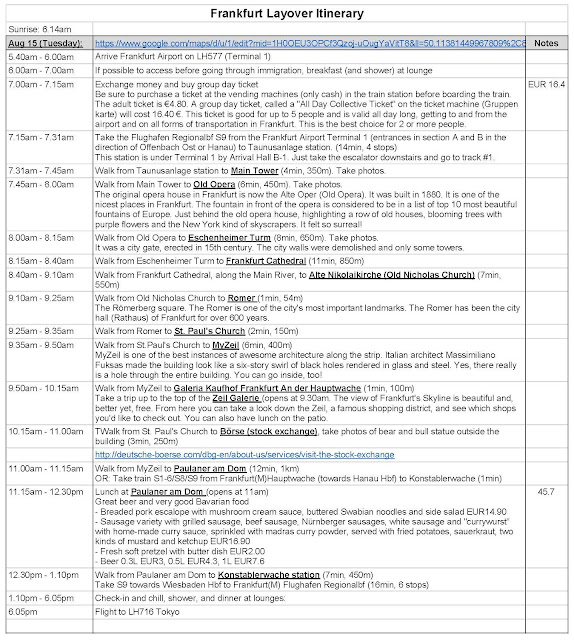 Itinerary for our layover and the link to our sightseeing route.