So what's the similarity or differences between China Rush and the US version? China Rush is one of the franchise of The Amazing Race. International Channel of Shanghai (ICS) acquired the copyrights from Disney-ABC to reproduce the Chinese version of this race. Basically, the race is pretty much similar to the US version but instead of racing around the world, China Rush races across various cities in China. Unlike the other versions of Amazing Race, China Rush is open to foreigners and not just restricted to Chinese citizens. Aight, I'm not gonna go into details about the race here coz everything is on wikipedia...lol!! =P

As to how I found out about this show, I don't really remember. I think I was trying to find out about Amazing Race Asia coz we wanted to audition for it back in 2010 but due to studies, we didn't apply for it and unfortunately, the show stopped its production after that season. Then I stumbled upon Allan Wu's website and he was talking about this Amazing Race China Rush which he was hosting. And so I googled, watched the entire season 2 on youtube and loved it. If any of my friends remembered, I posted a status update on fb back in Sept 2011 and I was just an audience at that time. What an irony huh!

Then in Dec 2011, the casting for the 3rd season of China Rush was announced...

...and we decided to give it a try this time around. Honestly, we didn't really put much expectation on being selected coz we didn't know what kinda contestants they were looking for and we didn't even know if we were qualified as Malaysians. But no harm trying, never try, never know. After all, life's meant to be an adventure isn't it?

We knew that we wouldn't be able to make it for the open audition in Shanghai so we opted for video application. So when bro came back from KL for Christmas, we took a day to shoot our video, a day for me to edit it, and a day to upload on youku. Luckily I was done with work before Christmas so had more time to work on these. We managed to get everything done in time and submitted our applications before I flew off to Shanghai for work on Dec 28.

Then...what happened next???
Our "Journey to the Amazing Race" story will be continued in the next post...stay tuned!! =P

Let me clarify, being on Amazing Race China Rush has absolutely nothing to do with us winning the AXN Big Challenge last year. We actually went through the entire application & audition process like everybody else and we were just really lucky to be chosen as one of the contestants for this third season.


Pardon me for my long story. Being on The Amazing Race is like a dream come true for me and it's definitely a once-in-a-lifetime journey that I wanna treasure for the rest of my life. So I'm trying to document every little thing about this journey before it fades out of my memory, and this blog is where I'll be sharing all about this AMAZING journey!! =)

So...what happened after we submitted our application??

Well...nothing much we could do apart from waiting right? Hahaha!! Oh wait, there was one thing I did...checked Weibo updates constantly...lol!! For those who don't know what Weibo is, it's equal to China's version of Facebook/Twitter (these 2 social networks are blocked in China) and it's one of the most popular sites in China (seriously!).

They had 2 rounds of open auditions in Shanghai in January and February but we couldn't attend both so we could only follow the updates on weibo and continued waiting...the Amazing Wait. =P

And after reading the following updates and still not receiving any emails from ChinaRush, I assumed that we weren't short-listed.

But then the following updates gave us a glimpse of hope that it wasn't over yet. We still stand a chance of getting selected. =) Yes I know, I'm a bit obsessed over this...lol!

2 months after submitting our video application, on Feb 17, we finally received an email from the CR team informing us that we've been selected for the 2nd round of interview in Shanghai!!! Woohooo!! After discussing with bro, we decided to fly all the way to Shanghai for this interview and bought our air tickets on the next day...and yes we are crazy! Luckily MAS was having sales at that time so we were able to get a pretty good deal on our flights even though our travel date was less than a week away. =)

We arrived Shanghai early on the interview day, checked into our hotel, dropped our bags and headed straight to STV station for our interview. Out of about 50 video applications, we realized that only 6 teams were called back for the 2nd round interview. It was pretty nerve-wrecking coz there were about 7-8 judges/interviewer, including the director (Chad), executive producer (XiaJIng), and Direcor of Photography (Stefano). There was also a cameraman recording our interview and 2 interviewers watching the monitor to see how we appear on camera I guess. I realized later on that the guy looking at the monitor was the director. Our interview was pretty simple, introduced ourselves, some Q&As, and we ended it with our 'Malaysian' performance. Overall, it went pretty well.

We didn't take any picture during our interview but it looked something like this. Chad, Allan Wu, and Stefano in the bottom left pic. =)

That was bro's first time in Shanghai so he took the opportunity to do some sightseeing over the weekend while I just stayed in the hotel to work. This post is a lil' lengthy so I'll share some photos of our short-Shanghai-audition-trip in the next post.

Anxiously waited for more updates about the selection process after we got back from SH...

Few days after returning from Shanghai, we received an email that absolutely made our day!! OMGGG...this was really unbelievable!! Even though it wasn't 100% confirmed that we're in yet, it's still pretty awesome to get this far!!!

Following the 'Congrats!' email, we received few more emails informing us about driver's license, visas, clothes size, etc. but still no words of confirmation on whether we've been selected.

Finally on March 12, we received this email - "Ready to Race?!" informing us that we've been short-listed as one of the contestants for Season 3. Oh yeahhhhh!!! Can't believe that this is really happening, we're gonna be in the Amazing Race China Rush!!!! I was so happy and excited but I had to keep all this excitement to myself coz we were not allowed to let anybody know that we've been selected.

Excitements aside, now our headache starts coz we had only 9 days to settle everything before leaving for Japan on the 21st for vacation. First thing first was to schedule an appointment with the boss to apply for leave from work, glad that it went well. Absolutely thankful for that. =) As we were asked to arrive Shanghai earlier,we had to shorten our Japan trip by 2 days and forfeited our original return air ticket from Tokyo. Within 9 days, we had to purchase a new air ticket from Tokyo to Shanghai which costed us a bomb, arranged to make our Chinese driver's license, had a phone interview, packed for Japan and the race, etc. Craziness to the max! It felt like we were racing even before the race started!!

After arriving Shanghai, we managed to get our license done, did the shooting for our opening sequence, had our photo shoot session, briefing, etc. and then it was race time!! Aight, that's all that I can share for now. If you wanna find out more about what happened next in our Amazing Race China Rush journey, you'll have to wait till August 26 to find out. We have no idea how it will turn out either, but trust me, it's gonna be awesome coz we're in it...hahahaha!! =P

Quotes to share:
"If you have a dream, give it a chance to happen!"
"It's not really about winning, but the adventure and opportunity to be in one of the world's greatest reality shows!"

上传了报名视频后，我们还能做些什么呢？除了耐心等待，还是耐心等待。由于我们身在大马，所以没办法参加在上海举行的海选。唯有默默关注微博上的消息...也因为如此我有了一个外号，叫“潜水教练”...哈哈！耐心等待两个月后，终于收到冲刺中国发来的邮件通知我们进入下一轮面试，而面试的地点是在上海电视台。我和二哥讨论后决定特地飞一趟上海参加这一轮的面试，所以隔天马上就订了马航的机票。其实我们俩做这个决定时也没想那么多，虽然机票不便宜，可是我们知道如果不参加这次面试的话就一定没机会被选上。想说既然机会已经在眼前，那就一定要好好把握。钱是可以赚回来的，但是机会一旦错过了可能就再也找不回。Sometimes you have to want something bad enough to make it happen.

I'm not sure if I've mentioned on my blog before, bro and I had to shorten our Japan trip for 2 days, forfeited our return ticket, and bought another ticket to Shanghai to prepare for this Race. Well...prepare as in getting our driver's license done, shop for race clothes, do the shooting for opening sequence and team intros, do the photoshoot, attend contestant briefing, etc. Sounds like we did a lot of things but apart from all these, we spent most of our time bumming in our window-less hotel (aka the 'redbox') surfing the net and watching TV ...and having 'nightmares' about the Race...lol!!

Our 'redbox'!!! I was so bored that I got almost 10 packets of sewing kits from the reception and started sewing my race clothes...lol!!

We were so excited when we got our brand new backpacks from production team!! Blue is cool!! =P Put my camera to good use before I surrendered it the day before our race started. We were so bored and efficient that we packed our bags right away...lol!!

Different angles of our backpacks. We even googled and youtubed how to adjust the straps on our backpacks to find the most comfortable position...haha!! It was my first time using such a big backpack and I loved it even though it was kinda heavy...haha!! =) 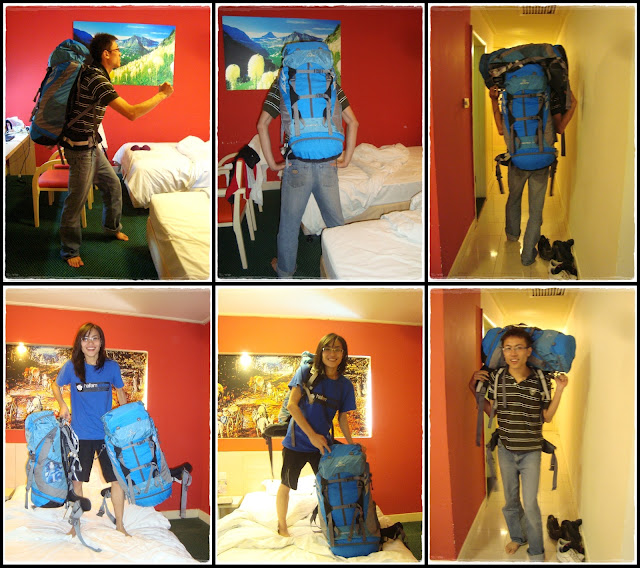 Obviously, we were both over-excited with our new 'toys' and was running around our hotel room with our backpacks...haha!! I also taught bro the best way to carry 2 bags just in case I didn't have energy to carry mine...lol!!

By the way, the official website for China Rush have been updated and I'll share some photos in the next post. Stay tuned for more stories on our Amazing journey!! =D At the meantime, appreciate if you can vote for "Fraternal Twins" or "双胞兄妹" through this link to support us!! Thanks!! =D
Powered by