For those who've watched the latest episode (EP8) of The Amazing Race China Rush 3, you guys would have found out that EP8 was our 'farewell' episode. Unfortunately, our Amazing Race journey has come to an end after 8 episodes. It was kinda sad and tough watching this episode but we're glad it turned out great. It was fun to see how it all went down and it definitely marked a good ending to our Amazing journey. =)

Taiwan leg was just not our day...it was such a close leg from the beginning till the end. We did our best throughout this entire leg and a bad cab luck just threw us off. From the beginning of the race, we already knew that taxi luck is a huge part of the race...cab drivers can make or break you. And at the most crucial part of the race, we had a lost driver, no map, no GPS, no home-ground advantage, and the only thing we could rely on was road signs. Definitely the most frustrating cab ride ever...lol!!

When we arrived at Danshui Fisherman's Wharf, we were gonna take the ferry back and forth coz we thought that there would be a direct ferry from Fisherman's Wharf to Bali but it was LOW TIDE when we got there so there was no more direct ferry! =.= After knowing the fact that we'll have to take 4-ferries, the whole journey would take at least 1 hour and we may even risk missing the last boat back, we decided to take our chances and made the final strategic decision. Being in that situation, that was the best and probably the only thing we could have done at that point of time. Some people may think that it was a suicide move but as a matter of fact, we didn't give up or take any short-cut, we just decided to make the best strategic move we had. If you put yourself in our shoes under that circumstances (especially after being bummed by a bad cab luck and low tide), you would understand why we made that last decision. Of course we were hoping for a non-elimination but we knew it was over when Allan said "You've been eliminated".

淡水藍色公路...where were you when we needed you most???

How I wished we had google map on that day...haha!! Oh well...it just wasn't our day. Since the last part was such a complicated route, I've decided to make an illustration of the 3 possible routes. =P (P.S. According to google map, there was another faster way to get from Yeliu to Bali but all our cabs took the coastal route instead.) Blue route: Take cab all the way to Bali Pier but may be caught in rush hour traffic (Harvard & Trainers) Green route: Take ferry from Old Street-Bali-Old Street-Fisherman's Wharf (Models, Fiancés, Girls). Red route: Direct ferry from Fisherman's Wharf-Bali-Fisherman's Wharf (the route we planned to take but there was no ferry due to low tide)

Anyway, we've raced hard for 8 legs, and what we've been doing only works this far. It would have been great to be able to continue racing and complete the entire race but anything could happen in this race, it's anybody's game. That's what makes this race so interesting to watch! There were so many things that could have taken us out earlier in the race especially in the first 2 legs, and we just felt really blessed to have gone this far (2/3) in the race. The wonderful places that we've travelled to, the fun things that we've experienced, the people that we've met in the race, this entire journey had been absolutely AMAZING and we've enjoyed every single moment of it!!

I think the big lesson in this is that you're not gonna win it every time but whatever you do, give it your all and go for it. I think that us running the race and making it as far as we did is already winning. That explains why we were able to leave the race smiling. Of course it's sad and disappointing to be eliminated but we would rather count our blessings for this once-in-a-lifetime opportunity than to dwell on the fact that we've been eliminated. That's life...you win some, you lose some.

We started off this race as a mediocre team but as we moved on further into it leg-by-leg, we learned from our mistakes and managed to be one of the front-runners for 5 consecutive legs...quite a good feat for a co-ed team huh! =P This is a reality show and the intensity of the race brings out the best and worst of people, that's what makes it interesting to watch! As for us, the race showcased a lot of our funny moments and me bullying bro all the time...lol!! I guess what people liked about us is the unique chemistry between us, the way we interact (especially seeing me bullying bro), and basically us just being ourselves!!! =P Big thank you to everyone who have rooted for us and we're absolutely overwhelmed by your love and support!! Sorry to disappoint y'all!

Since we didn't have a 'flashback' for our elimination, I'll do a quick recap of our journey on The Amazing Race China Rush 3. =)

Leg 1: We started the race as this blur & not-so-interesting team and was pretty much invisible in the 1st episode. Thanks to Hennifer, we made it through the starting line elimination but were at the back of the pack most of the time.

Leg 2: We were still trying to keep up with the pace of the race and almost screwed up our detour. This episode also revealed bro's natural comedian potential...frantically looking outside the building and asking "Where's the doll? Where's the doll?" Being crazy asking me to "Wait! Listen! Listen! What's that sound? and after 3 secs of silence, he answered himself "Nothing". =.= Digging and shovelling dirt on me...lol!! Moved up one place and finished the leg number 6...still staying in the race so it's all good.

Leg 3: Our breakthrough episode for being the only team that successfully completed the pot-balancing detour using our human-windblocker tactic. =) Started to reveal my bossy-sister character with my "Just go away!" and "Can you please shut your mouth up?"...lol!! Our pot-balancing detour brought us up to number 2 in this leg...pretty awesome!!

Leg 4: Still portraying my bully image and this basketball scene was classic...lol!! Thanks to bro's basketball fail, I made a few more funny comments..."The 3 boys in our team have all played basketball before, but they are not good, just like him (bro). He thinks he's good at basketball, but I don't think so." Lol!! Despite our lousy basketball intersection, we still managed to catch up and finished number 2 again in this leg. =)

Leg 5: We had 2 number 2 in a row and still going strong this leg. Good taxi luck in this leg gave us a comfortable lead from the beginning till the end. Bro continued his natural comedian stint with his epic fail in searching for a pocket to throw the trash, awkward dive into the pool, and me wiping the sword with his pants...lol!! We chose a harder detour got ourselves injured doing that detour but it somehow provided a lot of entertainment for the show with our "I hit my balls" and "Oh my ass". This leg was quite a tough leg for us with a lot of physical challenges and injuries but we managed to overcome all the challenges and won our first ever number 1 in the race! =D 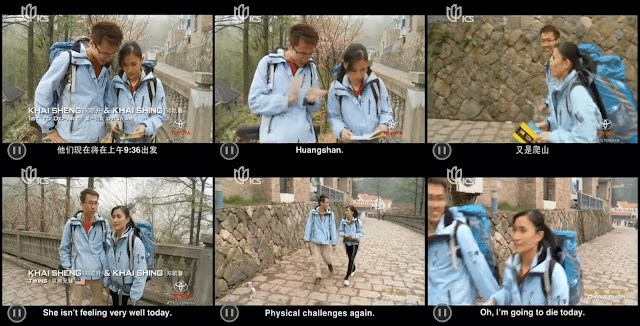 Leg 6: I fell sick after completing the last leg and I think I caught a cold in Moganshan. I was having fever, coughing, and my whole body was aching, so I had to push through this leg by popping aspirins to reduce my fever. I was definitely not in my best form to race but I'm glad we still managed to come in 2nd in this leg. 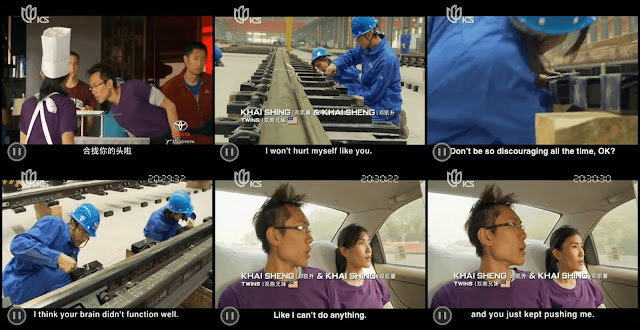 Leg 7: The highlight of this entire episode was our sibling bickering...lol!! Hahaha...I'm such a big bully!! I was definitely pushing bro's limits and successfully provoked his 'hair explosion'...lol!! Even though bro was angry, he still cracks us up with his ridiculous hairstyle..."怒发冲冠" is the perfect word to describe him...lol!! We could have done better if he was faster but number 3 ain't too bad! =P 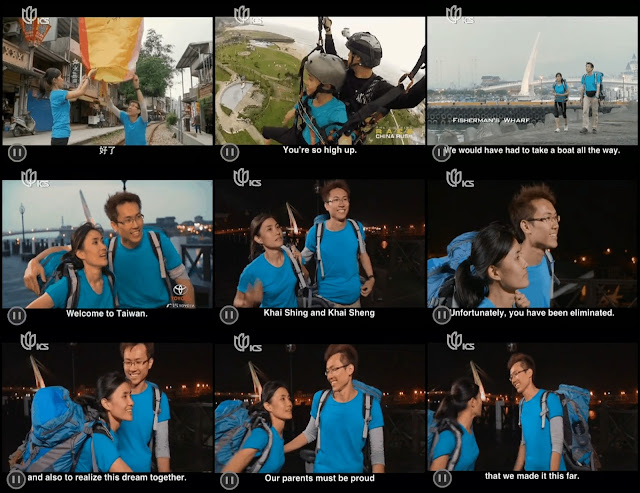 Leg 8: For the first time in China Rush history, we had the opportunity to venture out of mainland China and raced in Taiwan. Even though we've both been to Taipei before, being able to race in Taiwan was very exciting. This was a bitter-sweet leg, we had the opportunity to do fun stuffs like making a sky lantern and paragliding, but the pit stop at Danshui Fisherman's Wharf also marked the end of our Amazing Race journey. China Rush had really been an AMAZING journey for the both of us and it was definitely a dream come true for us.

Last but not least, here comes our 'oscar speech'. First of all, big thank you to ICS for giving us this once-in-a-lifetime opportunity to be part of cast of The Amazing Race China Rush 3. Thanks bro for joining this race with me, I can't think of any better person to run this race with. Throughout this month-long journey, we've had the opportunity to work with a lot of awesome peeps behind-the-scenes for China Rush. Trust me, it really ain't easy producing a race of this scale and this team of people really deserve more credits. There are so much going on behind-the-scenes that's so amazing and it's not a controlled environment at all, yet they're able to pull everything together and make this Race an Amazing one. The Amazing Race China Rush 3 that we're watching on TV today is months of hard work by a team of people who loves this race as much as we do. Kudos to the CR team for another Amazing season!! =) Thanks Chad, XiaJing, Steffano, Luis, Allan, Yating, David Xie, David Fu, Solo, Jonas, Bruce, Sam, HeMeng, Rachel, Yvonne, Betsy, Zoe, Ronnie, Jesse, XiaoFei, Josh, Claire, Yi YangTian, Ukachi, Paul, Lou, Ding Ding, Selena, Willa, Erik, etc. And of course, thanks to all our supporters for your love & support! 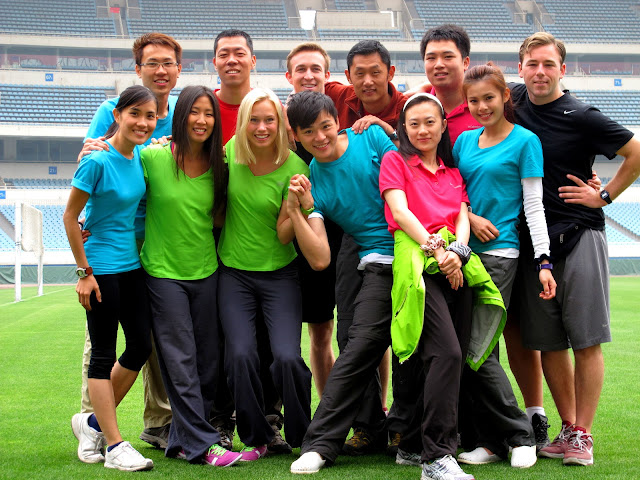